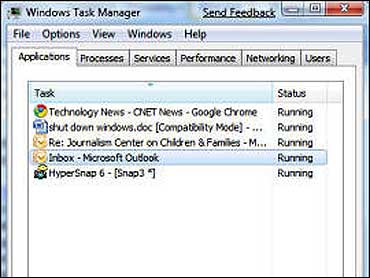 Back in the old days, when TVs and radios had tubes, it took a couple minutes for a set to warm up before you could watch or listen. But even then, you could turn it off instantly.

That's not true with Windows PCs. Not only does it sometimes take seemingly forever for them to boot, but it can take several minutes for one to shut down. Even worse, if a program stops responding you may or may not be able to shut it down. And even if it does terminate, it may take a while.

I'm not just talking about Windows XP and Vista. I'm having the same problem with Windows 7, though, to be fair, the new operating system is still in beta so it's possible that Microsoft could amaze and delight me by fixing this in the final version.

I realize that sometimes there is a bit of housekeeping to do in the form of closing files - but give me a break, should that really have to take up to five minutes? And there have been countless times, in my experience, when it simply never shuts down, forcing me to hold the power button for several seconds. I've even had laptops that were so stubborn that I had to remove the battery to turn them off.

I'm particularly annoyed at how Windows often fails to terminate programs that have crashed. In theory, pressing Ctrl, Alt and Delete to bring up the Task Manager followed by clicking End Task should simply stop the program and return you to the operating system. But that doesn't always work.

Sometimes the program just hangs there forever. Sometimes it quits after a random period of time and sometimes the entire computer just crashes. Imagine if you had a lamp in your house that was malfunctioning and the only way to turn it off was to turn off all the power to your house from the main breaker.

I haven't raised this particular issue with people at Microsoft, but a couple years ago when I was researching a story for The New York Times on technology energy hogs, the standard response from folks in Redmond was to blame third party applications and drivers for the fact that Windows machines often fail to properly go to or wake up from sleep mode.

Third party applications may very well be to blame, but it's no excuse. One of Windows strongest selling points is its ability to work with software and hardware from thousands of sources, so it seems to me that a company with the resources and experience of Microsoft should have figured out by now how to handle errant programs and drivers.

I do like many of the improvements in Windows 7, and I appreciate that it boots a little faster and - at least on my machine - seems better at going to sleep and waking up. Now all I want is the ability to turn off the darn machine and terminate a misbehaving program without having to dedicate my entire afternoon to the task.