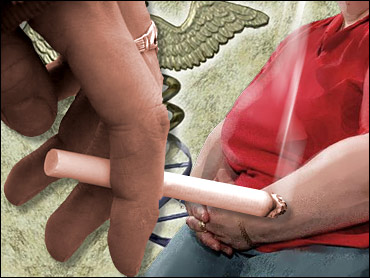 Obesity is quickly catching up to smoking as the Number One cause of preventable death in the United States. The Journal of the American Medical Association reports that rich diets and sedentary lifestyles contributed to 400,000 deaths in the year 2000 — just 35,000 behind tobacco. The Centers for Disease Control believes that by next year obesity will probably kill more Americans than smoking. This was probably the best news for tobacco companies since the invention of lying.

When I heard the report, an image quickly came to my mind. Remember those tobacco executives who faced a Congressional committee and — one after the other — said, "I don't believe that smoking is addictive?" Now I was picturing those same guys joyously toasting each other with champagne in one hand and cigars in the other. As they looked at graphs showing weight gain and bad diet catching up to smoking, I could almost hear them shouting with glee, "Go, obesity, go!"

They're probably hoping that someday soon, the sound of jiggling fat might drown out the coughing noises. Maybe the companies will finally stop being harassed by annoying groups like the American Cancer Society, the American Lung Association, and, well, the American people.

Now, the tobacco industry runs TV commercials and print ads in which they try to convince us that they are primarily concerned about our health and well-being, not about selling us cigarettes. Maybe if the obesity trend continues, they'll run commercials extolling the healthy benefits of cigarette smoking. Look for billboards that say things like, "Keep smoking and stop gaining weight" or "Stay healthy: Skip dessert and have a cigarette."

The day after the serious obesity problem was reported in the press, a bill was rushed through Congress to prevent people from suing fast food companies for contributing to their obese condition. (It's nicknamed the "cheeseburger bill," and it's obviously not "well done.") I understand the idea of an individual being responsible for his or her choices just as much as I understand a company being responsible for its choices. But why didn't Congress think our courts would be capable of throwing out these cases if they were frivolous?

It's not like people are clogging our cities' arteries lining up around courthouses with bags of greasy fries and burgers. There have just been a few cases of people blaming restaurants for their waistlines and extra chins, and most have been thrown out of court.

As I continued to read about this act of Congress, I learned that the "powerful food lobby" pressured Congress to pass the bill. I had never heard of a food lobby, let alone a "powerful" one. To me, the most famous "powerful lobby" was the tobacco lobby, and ... Wait a minute. Could these lobbyists possibly be the same people?

The sponsor of the bill, Florida Republican Ric Keller, said, "The food industry is under attack and in the crosshairs of the same trial lawyers who went after big tobacco." Was this allying of the two industries supposed to make me feel more or less sympathetic towards the poor food companies?

I remembered that in the past several years, some tobacco companies have taken over, merged with, or become involved to some extent with various food companies. After these moves, they were happy to remind us that tobacco is just one of their many products. They also sold healthy things.

Some of these healthy products that tobacco companies are involved with include Cheez Whiz, Taco Bell Home Foods, Denny's Restaurants of Mexico, Burger King of Japan, Chips Ahoy, Kraft Macaroni and Cheese Dinners, and Cool Whip.

So then I realized that in some ways, the same companies were actually Number One and Number Two in terms of selling products that help kill people. No matter what happens with the race to be the most dangerous, these guys will still be on top. Congratulations to them.

All of this brought a future image to my mind: those same executives in front of another Congressional committee. And this time, each one of them will be saying, "I do not believe that French fries, cheeseburgers, and milkshakes are fattening." And like last time, they'll do it with a straight face.