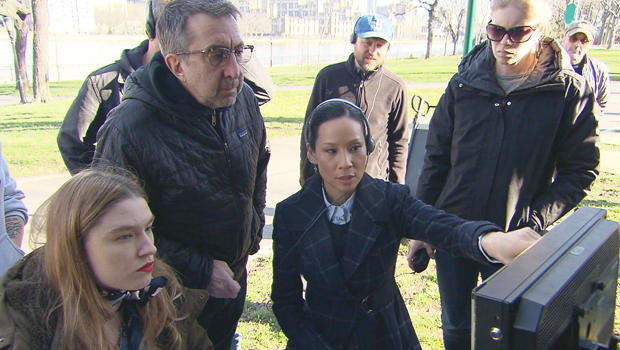 As her artwork makes clear, it's hard to put a "label" on Lucy Liu. Actress, director, artist, and single mother ... not so simple, as our Mo Rocca discovered:

Actress Lucy Liu showed Rocca around the set of her series, "Elementary":  "This is a precinct which is where we shoot a lot. There's a bathroom here but it actually goes out into the morgue. So if you go to the bathroom, you end up in the morgue!"

For CBS' take on Sherlock Holmes, Watson is a woman, played by Liu.

But that's not the series' only distinguishing feature. While the dynamic of traditional Holmesian drama is that Sherlock is brilliant and almost infallible while Watson is worshipful and tagging along, it's different here.

"Sherlock is fallible," Liu said. "He's got an addiction problem. She started with him as a sober companion, and then it's turned into a partnership.

"I think it's fair to say it's a much quieter role. It's a role that I have learned patience with. I've had many roles that are quite fiery, and have had a lot of exclamation points after the name. So I think it's nice to change it up a little bit!"

Yes, it's definitely a change from the rock-'em-sock-'em roles she's played in movies. And it's the first that's connected with one fan in particular.

"So is this the first thing that your mother has really grooved to?" asked Rocca.

"Absolutely! Yeah. No hesitation. No hesitation," Liu replied. "This show she understands. She was a huge 'Columbo' fan.  Now I've made it big time, because I'm on a detective show!"

Liu was raised in the New York City borough of Queens, speaking Chinese while growing up. "And then when my sister when to school, we started speaking a little bit of English, so it was sort of a little 'Chinglish,' a little mixed bag."

Her parents emigrated from China. She said, "They are definitely people that worked very hard, and had that whole idea of the American dream, and they pursued it."

But she kept her dream of acting a secret when she went off to the University of Michigan, where she auditioned for a production of "Alice in Wonderland" -- and was cast in the lead role.

"It was shocking,:" Liu said. "I thought there was a mistake, a big mistake. I kept following the name to the character. And I was in shock.

"Growing up as somebody from another country, really, not what you see on television, I never saw myself in the forefront, ever. We were always in the background."

But soon after moving to L.A., Liu would get used to being in front of the camera.

She recalled going to an audition for the series "Ally McBeal": "Everyone was basically Caucasian. And there was me, and then there was, like, one African American person. So I was like, 'Okay. So they're just doing this for the census!'"

Lucy didn't get the part she auditioned for, but series creator David E. Kelly was impressed, and wrote a role just for her, the acerbic Ling Woo. "A lot of people said that she was a bitch. But I felt that she was a very honest and very unmasked person, and was very direct."

And on the big screen, she made quite an entrance. She dominated in "Payback," and he kicked butt in "Charlie's Angels."

"At that point I could do a lot of stunt work, fighting work on film. It was very comfortable for me," she said.

"Has a lot of that stayed with you?" Rocca asked.

And her advice to anyone who tries to mug her in real life? "Run!"

All of this got the attention of director Quentin Tarantino. "He said he was writing something with me in mind, and could he show it to me. And I was like, 'Sure. Absolutely.'  Is this a joke?"

The film was "Kill Bill," and Liu's mob boss O-Ren Ishii was both regal and ruthless.

"I always knew that she was going to die not of old age, essentially," Liu laughed. "You know what I mean? She was gonna go down, and there was gonna be blood involved."

"The death certificate was not gonna say 'Died quietly in her sleep at 80,'" Rocca suggested.

The scene where Liu's character meets her end is considered one of Tarantino's finest, a directing tour de force:

And it inspired Lucy to direct some episodes of "Elementary."  "I love directing," she said. "It has opened up my world so much. I love working with the crew on a different level. All of the pistons are firing -- emotionally, communication, creativity, all of it."

Creativity that she's also expressed on the canvas. As a visual artist, she's worked in a variety of media.

"I don't ever see it just being one thing; it evolves," she said. "But it's been a very important thing. Because that's something that I can do on my own in my studio without a crew of 200 people necessarily."

Going solo was something Liu was well used to in her personal life.  But that changed 19 months ago with the arrival of baby Rockwell, born via surrogacy.

"Having a family was something that I sort of started thinking about a little bit more later, and thinking, 'Well, why isn't that a possibility? And shouldn't it be? And why was I always dismissing it?'"

Rocca asked, "Were you surprised that you had that change of heart?"

"I was. I was talking to somebody, and she said, 'Did you ever think about--' and before she could ever finish her sentence I was, like, 'No.' And she's like, 'I didn't even finish my sentence!'

"And I realized, What is that about that, you know? I'm so clear on what I don't want?"

"I think it was the fact that my family had such a strong work ethic growing up," she replied. "So I never really stopped to think that that's something that could help balance my life.

"And in fact, my life has changed, I don't want to say dramatically since he's now here, but my life has opened up in a way that I never thought it could. Because the colors are just more rich, they're more bold.

"I don't know; I feel so loved. And in all directions I feel incredibly lucky."