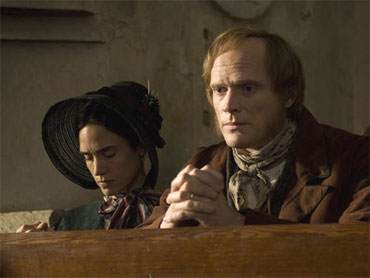 "On The Origin of Species" by Charles Darwin is the book in which he unveiled his theory of natural selection . . . evolution. Now, a century and a half later, Darwin's own evolution . . . as a man, and as a thinker . . . is about to come to life at the movies. Richard Roth has a preview:


There's wordplay in the title of a new movie about Charles Darwin, because "Creation" isn't about the beginning of life; it's about the birth of a book.

Published in 1859, Darwin's "Origin of Species" - explaining the evolution of all forms of life through the process he described as natural selection - was the so-called "dangerous idea" that re-shaped scientific thought . . . that still echoes in culture and politics today.

Actually, getting it down on paper, it turns out, had a deeply personal backstory.

"It is, on one level, about the procrastination in writing the book. and it's about the death of his daughter Annie, and the crisis that that brought to his marriage. And it's also about tolerance of ideas."

It's not about the bearded sage on British postage stamps and ten pound notes.

The film's picture of Darwin in his forties - ill, in grief, and wrestling with his writing - comes from a book by his great-great-grandson, Randall Keynes, who opened a box of family papers, and found a surprise.

"So much of his thinking, and so many of his greatest insights are insights that bear on human life, experience, emotions and reason," said Keynes. "And he shows how they're all wrapped up together."

His father's wealth gave Darwin comfortable choices in his own life: studying for a career in medicine, then the clergy - before joining a survey of South America on the HMS Beagle. The captain wanted a well-bred gentleman to share his table on the five-year sail.

"This was a naturalist, a 'gentleman naturalist,'" said historian James Moore, the author of several Darwin biographies. "Only wealthy people like that could be scientists, before that word was ever used."

He kept his curiosity, when he came home to England, to a house that might be called a laboratory.

You could think from the artifacts in carefully-arranged exhibits today, Darwin's home life a hundred and fifty years ago was all quiet contemplation.

In fact, with eight children in a huge house, it may be that the advance of science had a lot to do with the woman he married.

"Emma made Charles's work possible in every way," said Moore. "She ran the household, she employed the servants, she ruled with a hand of iron when necessary, she took care of the kids, kept them out of Charles' way [so] he could work on his studies. He was totally dependent on her orchestration of this space in the world shaped by love, for he could get on with his theorizing and writing all these great books. I'm sure she was intensely proud of him. "

Though she famously disagreed with him, on some articles of faith.

In a scene from the film, Emma tells her husband, "I think you're at war with God, Charles. And it's a battle you cannot win."

That idea, of course, followed Darwin to his tomb at Westminster Abbey. It's still a subject of argument and myth.

Burial here was a national honor - that didn't depend on belief. But three years before his death, Darwin had insisted that he'd never denied the existence of God; and that as far as he was concerned, religious belief - and belief in evolution - were not incompatible.

Charles and Emma Darwin's relationship may have turned on that accommodation: a lesson in enduring love and tolerance, according to actor Jennifer Connelly, who was playing opposite her own off-screen husband in the film.

"Even though these two people were wildly opposed in what they believed in, neither tried to shut the other one up, you know?" she told Roth. "She didn't say, 'Okay, you can't do this.' And he didn't say, 'It's ridiculous, you can't believe in God!' And they lived together peacefully and their marriage flourished, you know?"

In life we know the ending: a writer's grief and procrastination are conquered. A book is finished.

On screen, there's still suspense - about what happens next, when Charles brings Emma the completed manuscript.

"What should be done with it."

"What if I think it should be destroyed?" Emma asks.

"Then you must do what you think is right."

For more info:
"Creation" (Official Movie Site)
"On the Origin of Species: The Illustrated Edition" by Charles Darwin (Sterling Publishing)

Is a good night's sleep a far-fetched dream?