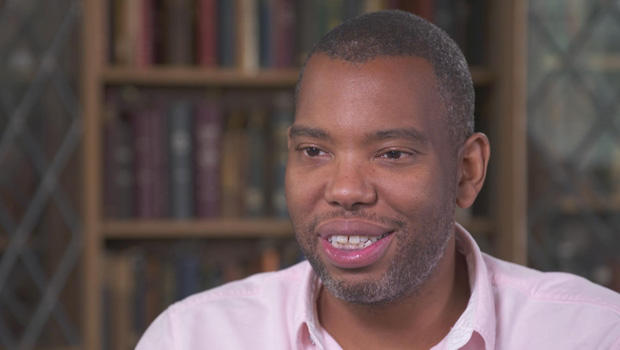 Bestselling author Ta-Nehisi Coates pulls no punches in his writings about race relations in America. This morning, he discusses the fine print with our Martha Teichner:

It's not all that often that a guy who writes about race can sell out a 3,000-seat theater … on a weeknight, especially. But Ta-Nehisi Coates routinely has fans -- as many white as black -- lined up around the block for tough talk some Americans might be uncomfortable hearing.

"If you are attempting to study American history and you don't understand the force of white supremacy, you fundamentally misunderstand America," he told an audience last month at the Metropolitan AME Church in Washington, D.C.

Teichner asked Coates, "Who is your audience?"

"Well, first of all I'm talking to myself," he laughed. "Secondly, it's probably young African-American kids who came up like me."

"But whole bunches of white people buy your books in large numbers."

"Yes. I mean, I'm not surprised anymore, but initially I was very surprised."

His latest book, "We Were Eight Years in Power: An American Tragedy" by Ta-Nehisi Coates (One World), an expanded version of essays he wrote for The Atlantic since 2008, was an instant bestseller. His last, a letter to his son about the hazards of being a black male in America ("Between the World and Me"), spent 80 weeks on The New York Times list. It won the National Book Award in 2015, the same year Ta-Nehisi Coates received a so-called MacArthur "genius grant."

"To be black in the Baltimore of my youth was to be naked before the elements of the world, before all the guns, fists, knives, crack, rape, and disease. The nakedness is not an error, nor pathology. The nakedness is the correct and intended result of policy, the predictable upshot of people forced for centuries to live under fear."

Coates said, "I try to write in such a way that it makes people feel things. I don't want them to read what I'm writing and just say, 'I think that's right' and agree with me. I want them to read something and then walk away and be haunted by it."

Forty-two now, Coates grew up in Baltimore surrounded by violence … and books. His father, Paul Coates, a one-time Black Panther, published forgotten African-American writers in his basement, and worked for years as a research librarian at historically black Howard University, in Washington, D.C.

Touring the university's library, where Ta-Nehisi would come as a child with his father, Paul Coates said, "Much of this collection is older than the university. It's older than 150 years; it goes back to the abolitionist period. I feel that energy when I enter this space.

Later, as a Howard student in the mid-'90s, Coates practically lived in this library. "You literally could go through that card catalog back there and in my recollection, it was almost anything I wanted to read written by a black author, I could just go get. I felt liberated in here."

Howard, for him, was an awakening -- less about his classes, more about self-education, experiencing a whole world in a small space: "You would meet students from Africa here, students from the Caribbean," he said.

Although he didn't graduate, it was at Howard that he began to write, and where he made friends with another student, Prince Jones, whose killing by police in 2000 as he drove to his fiance's home, galvanized Coates' rage, and made him the writer he is now.

"I had somebody who I knew, a living person whose life had value, and it was taken through no fault of his own," Coates said. "I write what I write in the way that I write it. I'm not being abstract, you know. I'm talking about something that, you know, is a part of my life."

A national correspondent for The Atlantic, his June 2014 cover story, "The Case for Reparations," was his controversial ticket to prominence. His argument: that the wealth gap ("For every nickel of wealth that the average black family has, a white family has a dollar") is the result of a long history of discriminatory housing policies, and must be redressed.

To Coates, "the very idea of uplift is the thing that is most threatening."

Suddenly, he was the nation's lightning rod on race.

An excerpt from the new book, published recently in The Atlantic, contends that Donald Trump couldn't have been elected had his predecessor not been Barack Obama.

"Donald Trump begins his political career in birtherism," Coates said. "That idea is connected to a very, very old notion that African-Americans are not citizens. Black people have been fighting for basic citizenship rights since the inception of the country."

"You get the sense that you believe that white supremacy, and the preservation of white supremacy, is a fundamental fact in the United States that has been systematically upheld," said Teichner.

"Yeah, I do. It doesn't sound so good when you say it like that!" he laughed. "But I do believe that, yes. I hope one day that's not true. But I think there's a broad amount of evidence to suggest that it is."

In person, Ta-Nehisi Coates is mild-mannered, even shy. He's embarrassed that he's become a kind of celebrity intellectual.

His writing is required or recommended reading in at least 400 colleges and universities across the country, including Tulane University in New Orleans.

One Tulane student said, "I kept expecting, like, 'this is what we need to do to change this.'"

"He's pretty cynical about the possibility of change," the teacher responded.

As he told Teichner, "My job is to look out on the world that I write about and be as honest as I possibly can about that world. If that's optimistic and uplifting, OK. And if it's not, OK."

So what now? The kid in him loves the fact that Marvel has him writing its "Black Panther" comics. He's also working on a novel and a screenplay. But Ta-Nehisi Coates is still weighing in on the subject that consumes him -- the ugly legacy of racism in the United States.

Teichner said, "There are probably people who read your books and get mad, and say, 'It sounds like he hates America.'"