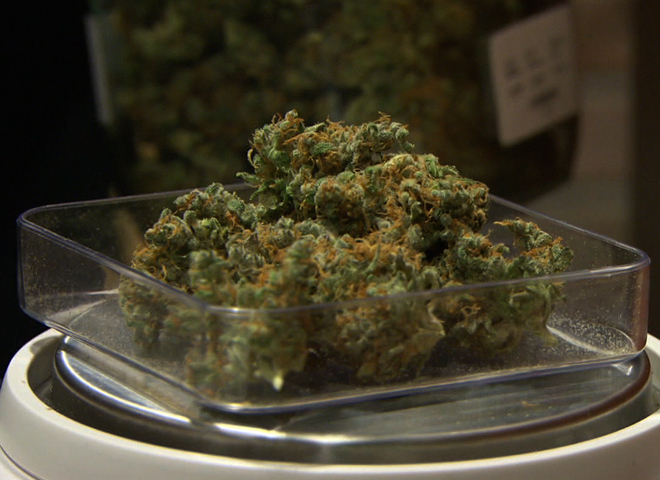 (CBS News) An ingredient you WON'T find in our brownies could become a growth industry in Colorado and Washington State, following popular votes in those states. Note we said "could," because federal law still bans its use. And just how should we refer to this controversial ingredient? Let Barry Petersen count the ways:

There are probably as many nicknames for marijuana as there are plants in this cultivation facility: nicknames like weed, grass, maryjane, Colorado cocktail, ganja, broccoli, chronic. The most popular is probably pot, but the one that may best describe it: giggle smoke.

And now it may have a new nickname - that "secret ingredient."

"It's like anything else my grandmother told me: 'Always taste your food,'" Durrah said. "So add a little as you go and at the end you put your last bit of seasoning in."

"I'd be afraid if I started tasting now I'd kind of lose my concentration," said Petersen.

"Well, you know, you're the interviewer. I'm the chef. I'm sort of used to this. I can do the tasting."

Longtime advocates for marijuana use, Scott and his wife and business partner Wanda James (they run Simply Pure Products) have something to be truly thankful for this week. Colorado voters approved a constitutional amendment legalizing pot for personal recreational use. In fact, more voted here in favor of pot legalization than voted for President Obama.

"And that's why we've seen so many people vote to go ahead and legalize marijuana here in Colorado, because the sky did not fall underneath medical marijuana."

The success of dispensaries has already spawned a whole new business: Edible marijuana.

For today's cooking aficionados, cannabis can complement pretty much everything.

"Two teaspoons would be equivalent to?" asked Petersen.

"In terms of the strength we have here, it's equivalent to about three and a half, four joints," Durrah said.

Durrah's magic elixir is butter or oil infused with marijuana - about an ounce of pot per pound of butter or quart of oil.

With quality weed going for up to $450 an ounce, it is way more expensive than truffles, caviar or foie gras, but Durrah says it's worth every penny.

"Do you taste any of the cannabis?" asked Petersen.

"I'll tell you right now, none whatsoever. And my taste is really good. That's why, you know, as I use lemongrass, ginger, those types of thing actually goes well with the flavor of cannabis, so it actually masks the flavor a lot more, and turns it more into a natural flavor, so you don't really notice the flavor from the cannabis."

"Cannabis professionals like ourselves - we've been in the industry for about four years now - we're really ushering in a new wave of industry here," said Kayvan Khalatbari, co-owner of the medical marijuana dispensary Denver Relief, and under Colorado law, all the marijuana sold here must be raised here.

"A lot of people are moving towards the edible ingestion method - it's much safer," said Khalatbari. "It's definitely healthier all the way around. People can incorporate it into their normal life, their normal foods.

"We produce things like olive oil or honey, things that people can incorporate into their breakfast, their lunch or their dinner."

Colorado's new amendment conflicts with Federal law that prohibits marijuana possession, although federal prosecutors have discretion about enforcement. If that conflict can be resolved . . . and if the amendment can take effect in the next few months . . . there will be a lot more demand.

And business will have room to grow.

Scott Durrah and Wanda James do offer a few caveats: Keep the ingredients and dishes far away from children, don't dose the unsuspecting, and . . .

The effects of eating marijuana are said to be gentler and longer-lasting than smoking, and we imagine more than a few troublesome family members might benefit from a bowl of Scott's pumpkin bisque this Thursday.

"It's an amazing way to get through Thanksgiving," James laughed. "For families that don't love and hug and embrace each other, this is an amazing way to make that happen. It's usually a very joyous occasion and everybody tends to leave full and happy."

"And no leftovers!" added Durrah.