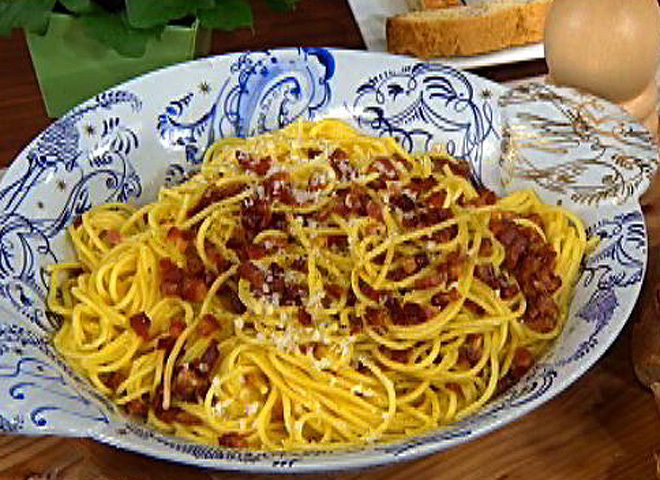 (CBS News) NEW YORK -- Marc Murphy grew up traveling around the globe with his diplomat father -- Milan, Paris, Genoa, Rome -- and all before he was 12. It's no wonder Marc was drawn to the world of food and cooking at a young age.

Today, he's one of New York's top chefs, a restaurateur, and a judge on the Food Network's hit show, "Chopped."

In 2004, Marc opened his first Landmarc restaurant, in Manhattan. It got rave reviews for its eclectic French and Italian menu. In 2006 came the first Ditch Plains, an instant hit with its casual, beach cuisine. Marc has opened several more Landmarc and Ditch Plains eateries, all falling under the umbrella of Benchmarc Restaurants, of which he's executive chef and owner.

Oh - and did we mention he also loves surfing?

Bring one gallon of water to a boil. Add 2 tablespoons salt. Add pasta and cook 10 to 12 minutes.

Meanwhile, combine olive oil and bacon in a large saute pan over medium heat and cook until bacon is crisp, about 8 minutes. Remove from heat and keep bacon and bacon fat hot. Combine eggs, cheese and black pepper in a large bowl. Drain pasta and add to egg mixture. Add bacon and bacon fat. Stir until eggs are cooked and pasta is well coated and creamy.

Cut all vegetables into a rough dice.

Heat saute pans over medium-high heat and add enough oil to coat the bottom of the pan. Saute each vegetable in separate pans for 2-3 minutes each.

Meanwhile, crush the tomatoes with your hands, reserving all the juices.

Combine all the vegetables, crushed tomatoes, garlic, herbs and seasoning in a large pot. Cover with tinfoil and roast in the oven for 20-25 minutes.

For more of Marc's recipes, go to Page 2.

Cut the ends off the zucchini and discard. Place on a French mandolin on the fine julienne setting. Cut into spaghetti size lengths. Toss in a bowl with the olive oil, mint, lemon juice, salt & pepper. Serve on a plate and top with the shaved pecorino.

Blanch Brussels sprouts in boiling salted water until tender, about 8 minutes. Drain and set aside.