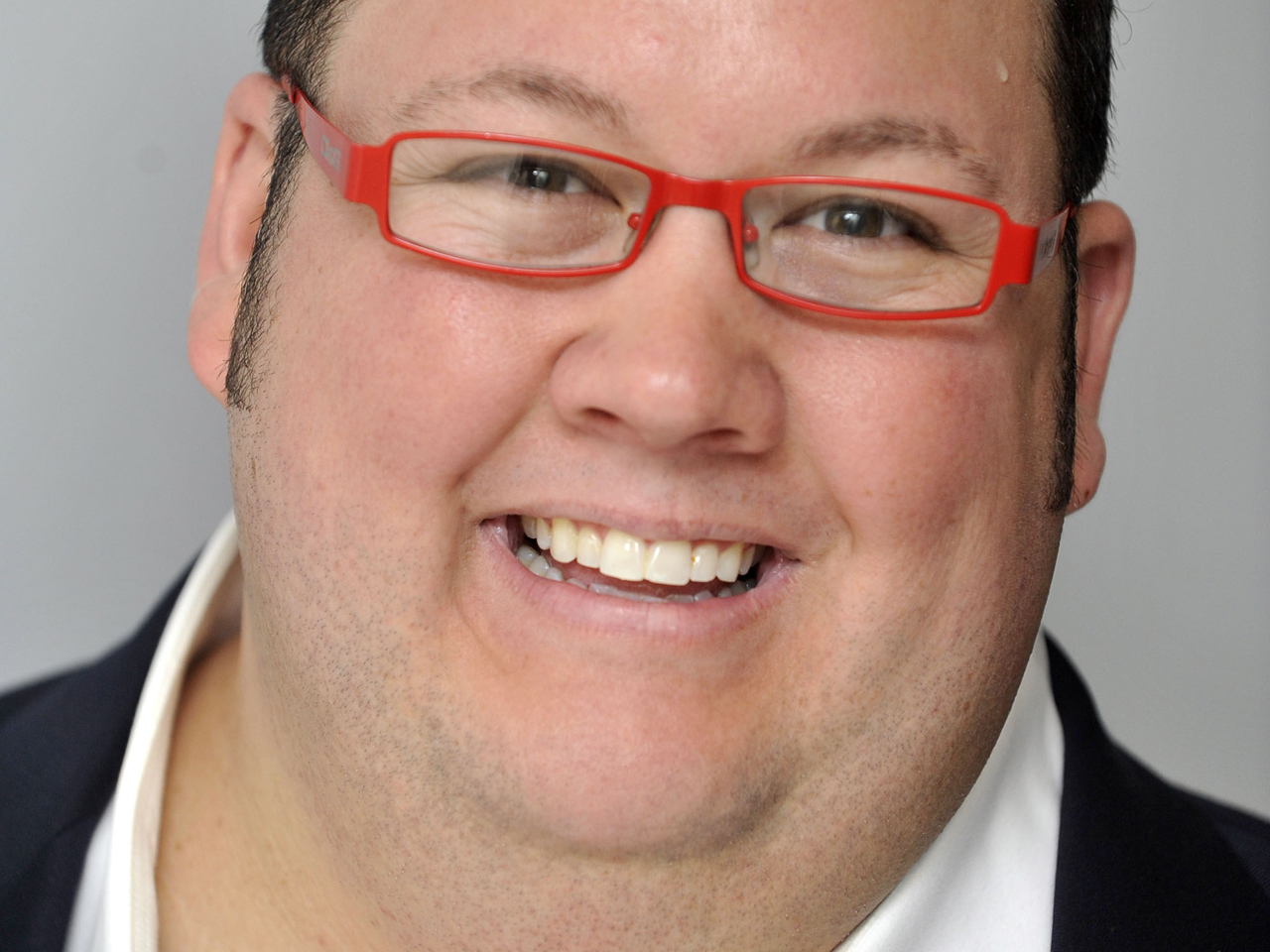 Graham Elliot didn't waste any time when it came to mastering his craft, leaving his mark on the culinary world early in his career.

At the age of 27, Graham became the youngest chef ever to be awarded four stars in any major U.S. city when he received the prestigious honor from three major Chicago publications. He has three James Beard nominations under his belt and was named one of Food & Wine Magazine's "Best New Chefs" in 2004.

Graham is the chef/owner of Chicago eateries Graham Elliot and Grahamwich, and is set to open another one, to be called G.E.B.

Also a huge music fan, Graham was named culinary director at the three-day music festival Lollapalooza, where he continues to cook for both the public and performers every year.

He just started shooting the third season of "Masterchef," and he visited "CBS This Morning: Saturday" with his ultimate dish: Short-rib Stroganoff with Peppercorn Spaetzle, Wild Mushrooms and Creme Fresh.

Enjoy all our recipes!

to taste Salt and Pepper

1. Heat a thin film of oil in a Dutch oven. Liberally season the ribs on both sides with salt and pepper and sear on all sides until brown. Remove the meat and set aside for later preparation.

2. In the same pan caramelize the vegetables and deglaze with red wine.

3. Return the shortribs back to the pot and cover with the beef stock and water.

4. Place the garlic, bay leaf, thyme, star anise, and fennel in a piece of cheese cloth and tie the ends off with a piece of butcher's twine. Add the parcel to the Dutch oven.

5. Cover the pot with foil or lid and place in oven at 325 degrees. Cook for 4 hours or until fork tender.

6. Once cooked, remove ribs from cooking liquid and place on cooling racks. Allow the ribs to cool completely before serving. Degrease and strain the liquid through a fine mesh strainer.

7. Carefully remove any excessive fat from the ribs and cut into large cubes.

1. Heat the oil in a saucepan and caramelize the shallots and garlic. Add the aromatics and deglaze with the red wine. Reduce the wine by half and add the rest of the liquids.

2. Simmer the sauce for 2 hours occasionally skimming the impurities with a spoon.

3. Strain the jus through a fine mesh strainer three times and reserve for later use.

2. Place the shallots, bay leaves, allspice, clove, and sugar in a pot covered with the water, sherry vinegar and white wine vinegar and bring to a light simmer.

3. Continue to cook stirring occasionally until the liquid has reduced to sec and the shallots are translucent and tacky.

4. Remove the allspice berry, cloves and bay leaves before serving.

to taste salt and pepper

1. In a large bowl combine all ingredients by hand and mix until well incorporated.

2. Allow the batter to rest for twenty minutes.

3. Using a spaetzle machine or perforated pan drop the batter into a large pot of boiling, salted water. Simmer until the spaetzle floats for a minute.

4. Remove the dumpling with a spider or slotted spoon and shock in ice water.

5. To serve heat butter in sautee pan and gently cook the spaetzle until the edges are golden. Season with salt and chives.

For the Black Trumpets:

to taste salt and pepper

1. In a large sautee pan, sautee the mushrooms in batches with butter and shallots.

2. Take 1/3 of the cooked mushrooms and puree in a blender with sherry vinegar, mushroom stock and grape seed oil until homogenized.

3. Pass the puree through a fine mesh strainer and season with salt and pepper.

4. Reserve the rest of the mushrooms for garniture.

For the Peppered Sour Cream:

1. In a pan, toast all the peppercorns until aromatic.

2. Pulse the peppercorns in a spice grinder until smooth.

3. Fold the peppercorn mixture into the sour cream and season with salt.

For more of Graham's recipes, go to Page 3.

Start with a larger pot that will hold the volume of the rice. Also I recommend using a wooden spoon when stirring the risotto. You will also need a pot to heat the water as well. The hot water helps keep the rice kernel from getting mushy. Add the olive oil to the larger pot and sautee the onions. Sautee the onions for 4 to 5 minutes or until translucent. Then add the rice and stir into the onions. Cook for another 5 minutes. Next, pour the wine into the pot in 3 increments. Adding the next increment once the prior had been stirred in. Continue to stir the rice to help release the natural starch. Once the rice has absorbed the wine add the hot water in small amounts. About 2 ounces of water at a time. Start tasting the rice once you've added about a cup of water. You will be looking for a bit of toothiness to the rice or al dente. This should take about 20 minutes. Remove the rice from the heat and pour onto a sheet pan. Let cool.

For the pearl onions you will need a larger rimmed sautee pan. Heat and add half the amount of butter. Lightly brown the onions. Once browned, cover with beer and reduce heat. Cook for about 30 minutes. Remove onions from the cooking liquid and reserve for later.

Peel the apples and reserve. Julienne the apples and toss with the lemon juice. Once the apple is coated with the juice, you can place in a small container and cover with water. Apples should not brown and will hold for about 4 hours.

In a small sauce pot, add apple peels, grenadine, apple cider vinegar and brown sugar. Reduce to a syrup and then puree in a blender.

In a medium sauce pan, add the uncooked risotto. Once again, slowly add hot water in small intervals. Add pearl onions once rice has become warmed thru. Next add the shredded cheese and mascarpone. Stir until it becomes emulsified with the rice. Add salt and extra pepper. The pepper helps cut thru the dish. Now, spoon into for bowls and garnish with, apples, bacon and Cheez-its.

1. Cut 2/3rd of the way down from the top of the lettuce. Discard the upper part. Cut the bottom 1/3rd into 4 equal pieces.

2. Repeat to the remaining 2 heads of romaine.

3. 3. Soak all pieces in cold water to remove any dirt. Pat dry and reserve for later.

1. In a high speed blender, add all ingredients except for oils, water and cheese. Puree until smooth.

2. Add Parmesan and puree for 1 minute. Slowly add oils in a small steady stream. Pause every 10 seconds to make oil is fully incorporated.

3. If the dressing gets too thick, adjust consistency with a touch of water.

1. In a food processor, combine all ingredients and mix until fully incorporated.

2. Using a rubber spatula, fill a pastry bag with the mixture. Reserve for later.

1. Using a serrated knife, remove all of the crust from the bread. Cut 1 in. X 3 in. rectangles from the brioche

2. Melt the butter in a small saucepot. Brush all side of the twinkie with melted butter.

3. In a nonstick sautee pan, gently brown the twinkie on medium heat.

4. Remove from pan and rest on a paper towel to soak up any excess butter.

Using a micro plane, carefully grate the Parmesan over a bowl.

1. Use a rounded spoon end to hollow out two holes in the Twinkies

2. 2.Pipe in the mascarpone filling until each Twinkie is stuffed full. Place Twinkies in the oven at 350 for 3 minutes to warm the center.

3. Using a paintbrush, coat each piece of romaine generously with dressing and roll in Parmesan fluff.

4. Place Twinkie on plate and gently rest the 3 pieces of lettuce on top of the Twinkie.

5. Garnish with Spanish anchovy on each piece of lettuce and fresh ground black pepper.

1. In a saucepan gently brown the butter until it emits a nutty aroma. Remove from and gently toast the spices in the butter and season with kosher salt.

2. Place the butter over low heat, add the marshmallows and carefully melt.

3. Combine the marshmallow mixture and rice Krispies in a large bowl and stir until the Krispies are evenly coated with the marshmallow. Cast the mixture into a 13x9 inch prepared pan. Sprinkle the top with fluer de sel and cut into desired shapes.