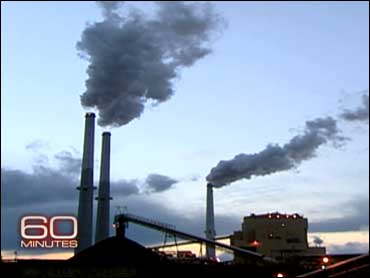 The future of our climate might be summed up in one question: what do we do about coal? Coal generates nearly half the electricity in the United States and the world. But it's the dirtiest fuel of all when it comes to carbon dioxide, or CO2, the leading greenhouse gas.

A few days ago, the Obama administration declared, for the first time, that CO2 is a threat to human health and it plans to impose limits. But making coal safe will come at an astronomical cost.

After the economy, this could be the biggest debate in Washington. One of the most influential people in this is Jim Rogers. Coal has made Rogers and his company rich and that's why we were surprised to hear what this high flying power baron has to say about what coal does to the environment.


Rogers wanted 60 Minutes to see America's enormous dependency on coal, so he flew correspondent Scott Pelley out to see one of his 20 coal burning power plants.

"I remember the first time I took a helicopter and looked down on a power plant like this. I was 41 years old and I said, 'Oh my goodness, I'm responsible for that!'" Rogers told Pelley.

Rogers is the CEO of Duke Energy, the nation's third largest electric utility. His stacks pump 100 million tons of carbon dioxide every year, which makes what comes out of Rogers' mouth so surprising.

"Controlling carbon emissions in the near future is inevitable in your view. This is going to happen," Pelley remarked.

"It's inevitable in my judgment," Rogers agreed.

"You're one of the biggest polluters in the world when it comes to carbon emissions," Pelley pointed out.

"We're one of the largest emitters. And it tells you how daunting the challenge is that we have in front of us," Rogers replied.

"You know, there are a lot of people many of them in your industry may who you probably know who say that global warming is not a big problem," Pelley said.

"It's my judgment it is a problem," Rogers said. "We need to go to work on it now. And it's critical that we start to act in this country."

Like a reformed tobacco executive, Rogers says we can't survive the emissions his industry creates. He showed 60 Minutes what he means at a North Carolina power station that can light up one and a half million homes.

Rogers told Pelley that particular plant burns roughly 19,000 tons of coal. "That's two train loads. And each train has about 100 cars," he explained.

The fact is, America runs on coal and here's one of the reasons why: the Powder River Basin that stretches across Wyoming and Montana may be the largest coal reserve on Earth. We've got 200 years worth of reserves - cheap, and right under our feet. No wonder coal generates half of our electricity.

But here's the brutal part: coal is twice as dirty as natural gas and puts more carbon dioxide in the air than all of our cars and trucks. In short, we're caught between a rock and a hot place.

"I notice all of this coming out of the stacks. What is that?" Pelley asked.

"That's good news," Rogers said. "When you see a plume comin' out of a stack of a power plant, that's vapor. And it basically says that the emissions have been cleaned."

The power industry spent billions in the 1990's cleaning up much of the sulfur and nitrogen oxides that cause acid rain. But those pollutants are mere drops in a stream of carbon dioxide. Rogers says getting rid of the carbon will require a new federal law to limit emissions and a new technology to clean up coal. At the same time, he says, Duke will transition to more wind, solar and nuclear power.

"Our goal line is substantially to reduce our carbon footprint, to de-carbonize our business, by 2050," he explained.

"Well, it took a hundred years to get to where we are. And we can't do this overnight," Rogers said.

But Jim Hansen, NASA's top climate scientists, says 2050 is too late. "We will have guaranteed disasters for our children, grandchildren, and the unborn," he said.

Hansen is credited with some of the earliest and most accurate projections of climate change. He thinks Roger's plan leaves the Earth in the oven decades too long.

"We are going to have to phase out emissions from coal within the next 20 years if we hope to prevent climate disasters," Hansen told Pelley.

"Are you saying we can't build any new coal fired power plants in this country?" Pelley asked.

"Absolutely, not only in this country, but in the world. This is not yet understood. We are going to have to have a moratorium on new coal-fired power plants within the next few years and phase out the existing ones over the next 20 years or so if we have to preserve the climate like the one that has existed the last several thousand years," Hansen said.

You know, Jim Rogers will hasten to tell you he does share your sense of urgency," Pelley remarked.

"I am following through on what is job one for me, making sure my customers have affordable, reliable, clean electricity," Rogers said.

Asked what would happen if we abandoned coal at this point, Rogers said, "We can't abandon coal. We have to find a way to keep it and use it in the future. And that means the ability to clean it up."

Rogers' plan of cleaning it up over 40 years involves something the coal and power industries promote as "clean coal technology." In fact they say we can't live without it.

"And we have to advance new clean coal technologies. If we don't, we may have to say goodbye to the American way of life that we all know and love," an ad for clean coal warned.

It is a seductive idea: cleaning up the carbon would solve everything. And during the presidential campaign both candidates endorsed clean coal.

"This is America - we figured out how to put a man on the moon in 10 years. You tell me we can't find a way to burn coal that we mine right here in the United States of America and make it work," then-candidate Barack Obama said.

Well, they did find a way to make it work. The problem is, clean coal makes putting a man on the moon look easy. The technology is called carbon capture and sequestration. We found the only place you can see it in America - the Basin Electric Power Co-Operative in North Dakota. Basin captures half its CO2, but they didn't build this because of climate change.

Long before anyone heard of global warming, Basin was conceived in the Carter administration to prove that America could use its own fuel - coal - and turn it into natural gas. They had to take the carbon out because it was an impurity.

"Before you started pumping it into the ground, and into the pipeline, where did it come out?" Pelley asked.

"That stack right up there," Floyd Robb of the power cooperative explained.

Carbon capture takes the carbon dioxide, turns it into a liquid and pumps it underground. Virtually everyone agrees, industry, environmentalists and politicians, that this is the only way we know to make coal safe for the planet. But consider taxpayers built this for one and a half billion dollars in the 1980's. That would be $4 billion today.

"Can enough carbon capture and sequestration facilities like this one be built in time to prevent climate change from coal?" Pelley asked.

"I don't think anyone knows the answer to that precisely. We know we have to try. And we know these facilities do work. Whether we can build enough of them to preserve the coal industry as we know it today I think is a question," Kammen said.

Kammen told Pelley that there are hundreds of coal-fired plants in the United States, and that each one would need to be outfitted with carbon caption sequestration plants.

"What are we talking about here in terms of infrastructure?" Pelley asked.

"So, we're talking about hundreds of billions, to a trillion dollars or so, and every power plant needs to capture its greenhouse gases," Kammen estimated.

He says the amount of CO2 we're talking about is mind-boggling. "If the world did this at scale, it would be the equivalent amount of CO2 going into the ground as oil now comes out of the ground. So you have to recreate the entire oil delivery infrastructure of the planet, which was built up over a century, just to deal with this CO2," he explained.

Asked if it is practical, Romm told Pelley, "That we don't know yet. No one has ever taken large volumes of CO2 and stuck it in these deep, underground aquifers and then measured and verified that it stays there permanently. I mean, after all if it doesn't stay there permanently, if it leaks out slowly, it's not saving the climate. Remember we've spent 30 years just trying to get one repository for nuclear waste, Yucca Mountain, and we haven't succeeded. Now we're going to need dozens and dozens of repositories for CO2.

"It is not impossible," Duke Energy CEO Jim Rogers argued. "What we need in this country is what I would call a Marshall Plan. We rebuilt the economies of Japan and Germany after World War II. We need to rebuild our economy and transition it to a low carbon economy. We can do that. But it's gonna take trillions of dollars to do it."

Trouble is, there is a Marshall plan today, and it's rebuilding Wall Street. Add to that Congress projection of record federal deficits of a trillion dollars. And it turns out not even the industry that warns of the end of our way of life is paying for it.

Asked how much Duke Energy has invested in carbon sequestration technology so far," Rogers said, "We have not invested any dollars in the technology, per say. We have spent a lot of time and money reviewing and analyzing the various technologies."

"While we haven't spent the money on sequestration technology we spent the time and the energy and we're going to co-invest with the government when this technology evolves," Rogers explained.

If capturing carbon in the U.S. is decades away, consider that China and India now put more carbon in the air than we do and the Chinese are opening coal-fired plants at a rate of one a week. None captures its carbon. Rogers has broken ground on his two new coal-fired plants despite warnings from scientists, like NASA's Jim Hansen.

"So when Jim Hansen says that to save the planet, we should stop building coal-fired power plants today you say what?" Pelley asked Rogers.

President Obama wants to speed up cleaner technologies by taxing utilities for the carbon they produce. But the idea is meeting some stiff resistance in Congress.