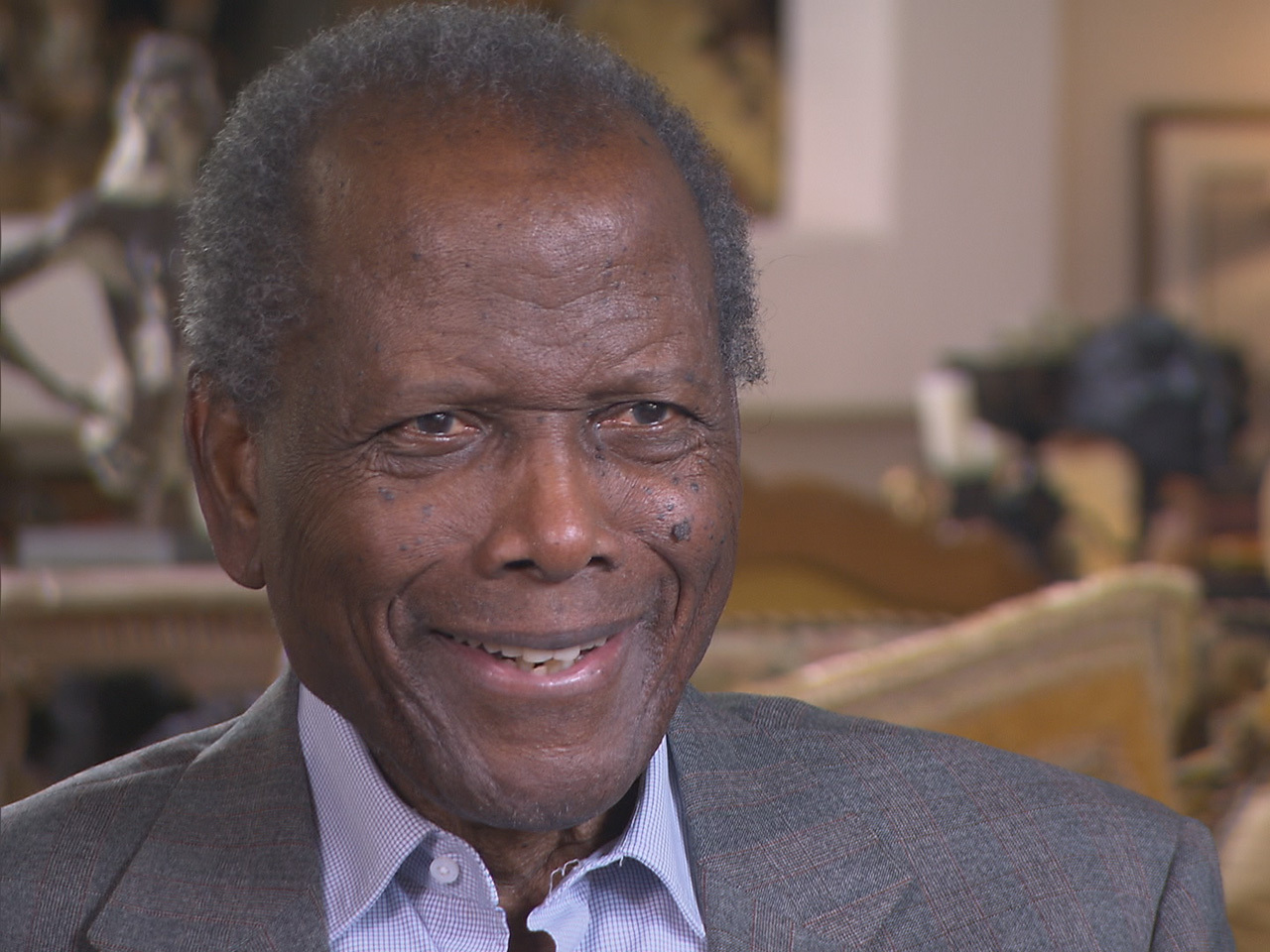 (CBS News) The word "Legend" seems custom-made for actor Sidney Poitier, who has been making his presence felt on and off the screen for more than 60 years now. And he'll be telling Lesley Stahl this morning . . . his work is far from done:

Sidney Poitier's life has been a series of "firsts." In 1958, he was the first black actor nominated for an Oscar as Best Actor for his role as an escaped convict chained to Tony Curtis in "The Defiant Ones."

And when he won the Best Actor Oscar in 1964, he was not only the first black actor to do so, he remained the only one until 2002.

After starring in more than 50 movies, Poitier says his career choices were less about being "first" and more about the image of his characters.

He would not, he told Lesley Stahl, play someone who was immoral or cruel. "If you go through my career, you'll find that I didn't. I didn't ever."

His typical character was dignified, proud, and ethical.

Take Virgil Tibbs, a Philadelphia homicide detective who reluctantly helps a small town police chief in Mississippi, played by Rod Steiger, solve a murder, in "In the Heat of the Night."

But before signing on to play the role, Poitier asked the movie studio for a major script change to one scene in which his character is slapped:

"I said, 'If he slaps me, I'm going to slap him back. You will put on paper that the studio agrees that the film will be shown nowhere in the world, with me standing there taking the slap from the man.' "

"God, you had this written into the contract?" Stahl said.

"That's right, written into the contract," he replied.

"And of course it is one of those great, great moments in all of film, when you slap him back."

"Yes, I knew that I would have been insulting every black person in the world [if I hadn't]," Poitier said.

One critic noted that the slap represented "the repressed wrath of the black man for his American bondage."

"I did not go into the film business to be symbolized as someone else's vision of me," Poitier said. He said he would not take any part "that reflects negatively on my father, my mother and my values.

"My father was a tomato farmer. There is the phrase that says he or she worked their fingers to the bone, well, that's my dad. And he was a very good man."

The youngest of seven children, Sidney Poitier was born three months premature while his Bahamian parents were in Miami to sell tomatoes.

Uncertain whether he would survive, his dad purchased a tiny casket, while his mother consulted a palm reader . . .

"The lady took her hand and started speaking to my mother: 'Don't worry about your son. He will survive,' " Poitier recalled. "And these were her words, she said: 'He will walk with kings.'"

And it came true: "Everything she said, including walking with kings, yeah."

Sidney lived in the Bahamas until the age of 15, when his parents -- afraid Sidney was on a path to delinquency -- sent him back to Miami to live with his older brother. But at 16, Sidney left for New York, where he tried his hand at acting, even though he'd had only two years of schooling.

"You couldn't read, you had a very thick Bahamian accent, and you decide to try and become an actor? Why did you go that route? It kind of makes no sense," said Stahl.

"I had no way of knowing that there is a madness to what I'm trying to do," he said.

After a disastrous audition with the American Negro Theater, where Poitier could barely read the script, an act of kindness at his job as a dishwasher changed his life.

"There was one of the waiters, a Jewish guy, elderly man, and he looked over at me and was looking at me for quite awhile. I had a newspaper, it was called Journal American. And he walked over to me, and he said, 'What's new in the paper?' And I looked up at this man. I said to him, 'I can't tell you what's in the paper, because I can't read very well.' He said, 'Let me ask you something, would you like me to read with you?' I said to him, 'Yes, if you like.'

"Now let me tell you something: That man, every night, the place is closed, everyone's gone, and he sat there with me week after week after week. And he told me about punctuations. He told me where dots were and what the dots mean here between these two words, all of that stuff."

"He took you through high school," said Stahl.

"Yes, he did. And it wasn't for long. I learned a lot. And then things began to happen."

Like landing an acting apprenticeship with the very same theater company that had laughed him out of his audition.

There, Poitier learned alongside actors like Ruby Dee, Ossie Davis and Harry Belafonte.

And then in 1950, he was cast in "No Way Out," as a doctor facing overt racism from a prisoner played by Richard Widmark.

Even at the beginning of his career, he was insisting that he portray men who were upright, well-educated, and often of stronger character than the whites around him.

By 1967, Poitier was among the top ten Hollywood moneymakers, and a top ten leading men. In that one year alone, he starred in "To Sir, With Love"; the Oscar-winning "In the Heat of the Night"; and "Guess Who's Coming to Dinner," with Spencer Tracy and Katharine Hepburn.

But that year he began to face criticism from some in the African American community, who labeled him an "Uncle Tom" for the "purity" of his roles.

"And it didn't hurt you?" asked Stahl.

"Hurt me for what?" he replied. "I have no objections to the other people, even though I disagree with their point of view, and I don't disagree with their point of view and chastise them - I just simply say, 'I live by a certain code.' I have to have a certain amount of decency in my behavioral pattern. I have to have that. That is my responsibility.

In the 1970s, Poitier turned to directing. And surprisingly, the actor who so often personified elegance, grace and earnestness, directed comedies, with slapstick, including "Uptown Saturday Night" and "Stir Crazy."

In the 1980s, he turned to writing books, producing three autobiographies about himself and his family of six daughters, grandchildren and great-grandchildren.

And now, at age 86, after a lifetime of accolades, Poitier has written a novel, called "Montaro Caine."

He spent years writing in long hand and on the computer. "Wow, it took me a very long time."

It's two genres mixed together: mystery and science fiction. For Sidney Poitier, the novel is a chance to reflect on life and all its meanings.

"I was not intending to make an impression on the people who would read the book," he explained. "I was finding release for myself within myself. I was looking for who I am at this point in my life."

"Did you find out?" Stahl asked.