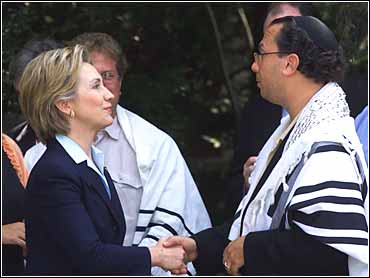 The first lady spoke before an overflow crowd of about 350 people just one week after her campaign was rocked by an allegation that she made an anti-Semitic remark about an Arkansas campaign worker in 1974. She has angrily denied the charge.

"I know this has been a very difficult and trying week for you," said Rabbi Marc Schneier, who invited and introduced Clinton. `"It's time for us to move on. Hillary has always been a friend of our people."

Clinton spoke about the ongoing Camp David peace talks, telling her audience that "the challenges the president and prime minister are facing are rooted in whether or not others will give up their hatred and their sense of violence in return for peace."

President Clinton, Israeli Prime Minister Ehud Barak and Palestinian leader Yasser Arafat have been meeting at Camp David in efforts to reach a new Middle East peace agreement. The president, who was in Japan for an economic summit, is due back at the talks Sunday night.
During her talk, Mrs. Clinton never mentioned Arafat or the PLO. Instead, she focused on Barak and Israel.

The Israelis, she said, have a right "to keep their children safe from violence and terrorism. We know in our hearts that God has deemed their cause just. I believe we have to support their efforts, and particularly support what the prime minister is going to do."

The GOP Senate candidate, Rep. Rick Lazio, is scheduled to speak at the synagogue next Saturday. Both candidates are courting the Jewish vote, which makes up 12 percent of the state's electorate.