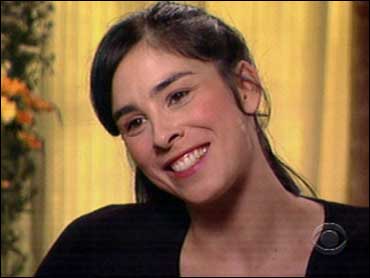 Comedian Don Rickles perfected the art of the insult … Lenny Bruce pushed the boundaries of obscenity … now, Sarah Silverman is following in both their footsteps, with a little help from a straight-man, as CBS Evening News anchor Katie Couric is about to show us ...

In the pantheon of great dogs from television and film there's Lassie, Rin-Tin-Tin, and … Doug?

Doug is the real-life sidekick, confidante and best-friend of comedian Sarah Silverman, and one of the stars of "The Sarah Silverman Program," now in its 3rd season on Comedy Central.

"I got him from a shelter about nine years ago," Silverman told Couric. "He isn't trained at all. I mean, all he does on the show pretty much is, you know, lie on the bed or lick his own butt. These are things he does naturally and we just work around it."

Doug's laconic acting style is perfect for the off-beat, off-color brand of humor that has made Sarah Silverman one of the hottest comics working today.

"I was trying to describe your humor," Couric said, "and I was thinking, well, 'irreverent' really isn't strong enough. So I came up with the word 'demented.'"

"Ooh, I like 'demented,'" Silverman said. "I've been trying not to say 'retarded' because I do feel like it's not nice. 'Demented,' yeah."

In her comedy she covers everything from racism to the Holocaust (sometimes in the same joke).

"I really believe this to be true," she said in her stand-up act, "I believe if black people were in Germany in World War II the Holocaust never would have happened. I do. … Or, not to Jews."

"I've had people, a Jewish person in the audience, like, die laughing at jokes about Mexican people and black people. And then you do a joke about Jews or the Holocaust, and it's like, 'Whoa, that's not funny!'"

"It depends on your perspective and the prism from which you're watching your humor, right?" Couric asked.

From the beginning, it was clear Silverman was a natural. The youngest of four girls growing up in a middle-class Jewish family in New Hampshire, her parents divorced when she was 6. She struggled with depression … and something else:

"As we grow up in our childhood we have all these dysfunctions that drives us to be whatever we're driven to be," she said on stage. "For comedians it's definitely, like, any kind of humiliation. For me that was bed-wetting well into my teens."

But it was long before this dark period in her life that Silverman learned she could make people laugh. When she was very young - two or three - her father used to get her to say cuss words.

"Yeah, he thought it was hilarious to teach me dirty words, you know? And I would say them, you know, as, like, a three-year-old and get this wild laughter, you know? And it became addictive. And it's, like, that kind of shock value, you know, became something that I was constantly seeking out."

"I was raped by a doctor … which is, you know, so bittersweet for a Jewish girl."

"I don't want to be labeled or straight, I just want people to look at me and see me, you know, as white."

By dealing with subjects that sometimes cross the line, Couric asked, is it hypocrisy that bugs Silverman? Or is it just people who have intense points of view that she just wants needle?

"A lot of times it's having a strong opinion and then just going the opposite direction, you know?" she said. "And hopefully, some kind of, you know, absolute value of it comes through, you know?"

Outrageous or not, everything seems to be working.

(ABC)
Earlier this year Silverman won an Emmy for a video spoof she made for fellow comedian (and boyfriend) Jimmy Kimmel, in which she sang about "having sex" with Matt Damon.

"For some reason the timing was right or, I don't know what," she said. "Everybody went nuts for it. We couldn't believe it. We kept checking the countdown on YouTube, 'Oh my God!' You know? It was weird and wild.

And last month she released "The Great Schlep," a public service announcement urging young Jews to go to Florida and convince their grandparents to vote for Barack Obama.

"The people who vote in Florida are old Jews," she said, "and they're not planning on voting for Obama for a lot of reasons - his name, you know he's got a crappy name, to them it sounds Muslim, and of course he's not, but they have these old fears."

"The Great Schlep" aims to educate grandparents in Florida with the implicit threat that if they don't "see the light," they're not going to see their grandchildren.

"Yeah, you want another visit this year? Vote Obama!" she says.

It's just another example of Sarah Silverman's twisted take on serious - and not-so-serious - subjects, some ripped from the headlines of her own life, like the time her dog got into a bag of pot brownies …

And what was she doing with them?

Silverman ends every episode of her show talking to Doug about the life-lessons she's learned that day:

"Whether you're gay, bisexual, it doesn't matter. You know? Because at the end of the day they're both gross."