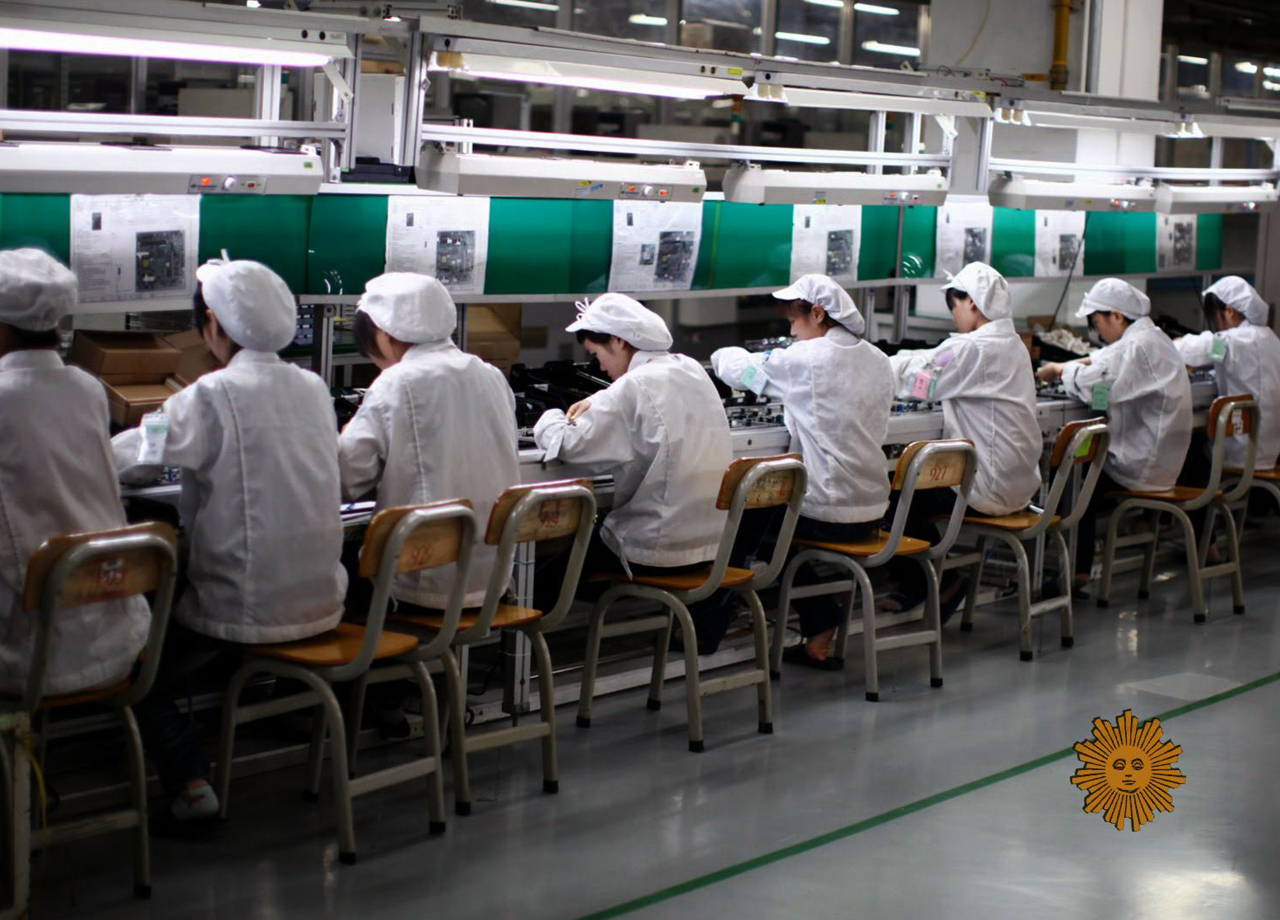 Even in this high-tech age, our most popular electronic devices are largely made by hand . . . MANY hands, as it turns out . . . hands that often are very over-worked, or so industry's critics contend. Our Sunday Morning Cover Story is reported by Martha Teichner:

Just try to imagine 37 million iPhones . . . that's how many Apple sold in just the last three months of 2011.

On Tuesday it announced revenue of more than $46 billion for the quarter ending December 31.

Tim Cook, the man who replaced the late Steve Jobs as CEO of Apple, told Wall Street analysts the company couldn't keep up with global demand for the new iPhone 4S. "We didn't bet high enough," he said.

The world is in love with everything Apple . . . but here's a question: Have you ever wondered where all that stuff gets made?

"I had never thought ever, in a dedicated way, about how they were made," said performer Mike Daisey, an admitted geek. That is the centerpiece of his monologue, "The Agony and the Ecstasy of Steve Jobs."

"Shenzhen is a city of 14 million people that is larger and denser than New York City. It's the third-largest city in all of China. It's the place where almost all your **** comes from."

The show is an on-stage expose of working conditions at a factory in Shenzhen, China, owned by a company called Foxconn, which manufactures electronics under contract for practically every major brand you can name, including Apple.

It is, as Daisey says in his performance piece, "the biggest company you've never heard of. Foxconn makes over 50 percent of all electronics in the world."

The Foxconn plant in Shenzhen employs more than 400,000 people.

"If you've never been to the economic engines of China, these giant buildings stacked up with people, they're just staggering," said Daisey. "It almost takes your breath away."

Daisey went to Shenzhen. Foxconn wouldn't let him in, so he stood outside the main gate with his translator, talking to workers at shift change.

But what was news were the suicides . . .

"While I was there, in May and June 2010, that's really at the peak of when the suicides were happening with kind of terrible regularity," he said, "where week after week, workers would go up onto the roofs of these buildings and throw themselves off the buildings."

"When you were there, were there nets around the building to prevent further suicides?" asked Teichner.

"There was," he said. "They look a lot like the nets you would put out to catch fish."

"From the spike of suicides at Foxconn, we began to question maybe the harsh management methods drive the workers to commit suicide," said Debby Chan, a project manager for SACOM - Students and Scholars Against Corporate Misbehavior, a labor watchdog group based in Hong Kong. SACOM reported at least 18 Foxconn workers committed suicide in 2010, and more tried.

"We began to interview the workers, and then many of them told us they have work pressure - if they make some mistake they would be punished."

Foxconn responded that the suicide rate at its plants in China was actually lower than the national average. But the world had noticed.

Even comedian Stephen Colbert commented on Foxxconn's action to ensure the mental health of its employees: "Making them sign a pledge not to kill themselves."

This is what Steve Jobs had to say: "We're all over this . . . Foxconn is not a sweatshop. You go to this place, and it's a factory, but my gosh, I mean, they got restaurants and movie theaters and hospitals and swimming pools. For a factory, it's a pretty nice factory."

So what then would drive workers to suicide? The pressure to produce, especially to keep up with demand for a hot device like a new iPhone, according to Mike Daisey.

"The official work day in China is eight hours long. That's a joke," Daisey said in his performance. "I never met anyone who'd even heard of an eight-hour shift. Everyone I talked to worked 12-hour shifts, standard, and often much longer than that: 14 hours a day, 15 hours a day. Sometimes longer than that. While I am in country, a worker at Foxconn dies after working a 34-hour shift."

We have repeatedly asked Apple for comment, and been told no.

We have repeatedly asked Foxconn for access to its Shenzhen plant. No reply.

Instead, we were referred to a London-based consulting firm, Impact Ltd., paid by Apple to address child labor issues among its suppliers. "In my experience, their approach to this particular topic of dealing with child labor is at the very top end of industry practice," said Dionne Harrison, director of operations.

If you go to Foxconn's website, you discover that it's part of a huge, Taiwan-based conglomerate called Hon Hai Precision Industry Co., with plants all over the world - including the United States and Mexico.

Foxconn employs approximately a million people throughout China - not just in Shenzhen. It claims to follow strict industry standards of conduct, and to respect its workforce.

"A lot of companies have codes of conduct or standards that they apply to their factory partners in China," said Ian Spaulding, who heads Infact, a consulting firm that helps companies in China improve working conditions. "And what we've learned is a lot of those standards are aspirational in nature. The market practices that a lot of these factories employ are well below those standards."

Spaulding won't say whether he works with Apple and Foxconn, or talk about them specifically.

It's important to note that they are by no means the only electronics makers implicated.

"It is common for factories to hide working hours, to somehow coach workers on what to say when auditors come to the factory," Spaulding said.

On January 13, for the first time Apple released a list of its major suppliers, and with it its annual supplier responsibility report, showing that in 2011 it conducted 80 percent more audits than in 2010.

The company's supplier code of conduct limits workers to a 60-hour/6-day week. By Apple's own data, only 38 percent of its suppliers complied.

"Every time when we send reports, statements to them, we do not even get any reply," said SCOM's Debby Chan. "From this kind of experience, we think that Apple is almost the most arrogant company."

On Thursday, after a damning, front-page story in The New York Times, Apple CEO Tim Cook emailed his staff:

"Any suggestion that we don't care is patently false and offensive to us . . . We are attacking problems aggressively . . . it would be easy to look for problems in fewer places and report prettier results, but those would not be the actions of a leader."

And that's just the point for Mike Daisey.

"Why are we talking about Apple here as opposed to, say, Microsoft or Dell or Samsung or any of the other companies that contract with the Foxconns of the world?" Teichner asked.

"Apple has said for decades that it wants to be a leader," replied Daisey. "Well, it's a leader now. I think they should be delighted that people actually expect them to lead and to rally the rest of the industry."

In 2012 it's virtually impossible to stop buying and using electronics made in Chinese factories for Apple or anybody else.

"Our devices are so beautiful, especially the Apple devices. They're so gorgeous-looking that it seems as though they were made by a machine. But the reality is they're assembled by hand - thousands of people work with their fingers putting together the tiny components," said Daisey. "So much of our world is actually handmade, even though it looks so modern. It's built on the bones of this labor. And we need to actually understand that."

Bill Nye on an eclipse's beauty and the wonder of science
Thanks for reading CBS NEWS.
Create your free account or log in
for more features.
View CBS News In
CBS News App Open
Chrome Safari Continue
Be the first to know
Get browser notifications for breaking news, live events, and exclusive reporting.