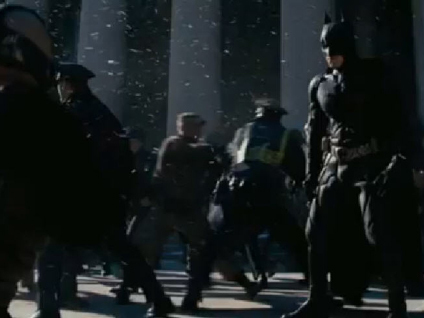 (CBS) A new trailer for "The Dark Knight Rises" has arrived.

Moviegoers who saw certain IMAX screenings of "Mission: Impossible - Ghost Protocol," were treated to a six-minute prologue of Christopher Nolan's new Batman film, but those who saw it on standard screens still got to see the latest teaser.

The clip opens on a young boy singing the national anthem at a football game, as the villain Bane (Tom Hardy) wreaks mayhem at the stadium.

It also gives a closer look at Anne Hathaway as Selina Kyle (aka Catwoman).

"A storm is coming, Mr. Wayne," she warns Bruce Wayne (Christain Bale, reprising his role as the Caped Crusader) as the two dance at a gala. "And you and your friends better batten down the hatches."

Gary Oldman returns as Commissioner Gordon, Michael Caine is back as Alfred, and Morgan Freeman as Lucius Fox. Joseph Gordon-Levitt and Marion Cotillard also star in the film.