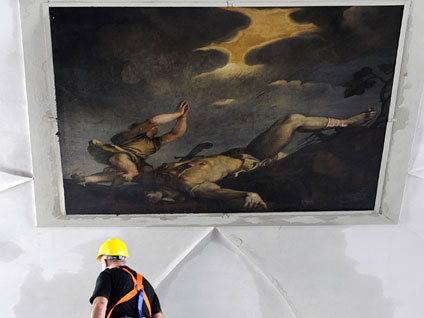 Call it "The CSI Effect." It seems the popular CBS TV show on crime scene investigators is having an effect on real-life jurors. They want a clear trail of evidence, or they won't vote "guilty."

She notes that, despite more than one witness testifying Blake had asked them to kill his wife, the jurors wanted more than that. They wanted the razzle-dazzle of "CSI."

Every week, Kauffman explains, stars on the show solve crimes based on intricate analysis of forensic evidence. And that kind of evidence just wasn't available in the Blake case.

"They couldn't put the gun in his hand. …There was no blood spatter. They had nothing," jury foreman Thomas Nicholson said after the trial ended.

It was prosecutor Shellie Samuels' first loss in 50 murder cases. Though she presented more than 70 witnesses against Blake, she couldn't show the jury blood evidence, or conclusive gun-shot residue.

"If she would have had all that information," juror Lori Moore said later, "that would have meant that he was guilty."

More than 60 million people watch the "CSI" shows every week, which means a lot of potential jurors now have high expectations of forensic evidence. "The CSI Effect" is being felt in courtrooms from coast to coast, Kauffman points out.

Trouble is, Kauffman notes, this district attorney works in the small Oregon town of Astoria. The nearest forensic lab is hours away.

Beth Carpenter, who's with the Oregon Crime Lab, says there are expectations well beyond what the reality is, and that has increased the workload quite a bit.

And in a big city like Baltimore, prosecutors blamed "The CSI Effect" when jurors acquitted a man of murder, even though were two eyewitnesses.

"Not even first degree, second degree, third degree, nothing, and they shot my husband," cried Patricia Peterson, the victim's wife.

Even the producers of "CSI" have been surprised at how jurors want to judge fact from their fictional creation.

"CSI" creator Anthony E. Zuiker observes, " 'The CSI Effect' is, in my opinion, the most amazing thing that has ever come out of the series. For the first time in American history, you're not allowed to fool the jury anymore."

In fact, Kauffman adds, at least half the jurors selected for the Blake case say they watch such shows regularly.

"The prosecutor took the approach of, 'We don't need the DNA, we don't need the eyewitness, we've got the big picture here, and if you look at the big picture, who had the motive, who had the opportunity, who acted strangely, who wanted his wife dead -- it was Robert Blake,' " says Loyola Law School Professor Laurie Levensen, a former federal prosecutor.

But clearly, the jury wanted the evidence they see on "CSI" each week.

Former prosecutor Wendy Murphy, a CBS News consultant, says "The CSI Effect" is real, and an impediment: "When 'CSI' trumps common sense, then you have a systemic problem. The National District Attorneys Association is deeply concerned about the effect of 'CSI.' "

Murphy points out, "This has been a bit of a problem even before the onset of DNA, and shows like 'CSI.' You get jurors who don't have a lot of brain cells asking questions after the case is over about why there weren't any fingerprints on the pillow case. Of course, that makes no sense.

"But once you get the influence of 'CSI,' what they start to expect is not only a lot of forensic evidence, but that this one missing piece would have told them the truth. That's just not reality.

"Most murder cases have a little forensic evidence, but it doesn't really tell the whole story.

"I actually think one of the problems is we're not screening out these jurors who are way too much under the influence of these pop culture programs. They shouldn't be allowed to sit in judgment, frankly."

Defense attorney and CBS News consultant Mickey Sherman disagrees, saying jurors are "a little more educated now, maybe too educated. …If they believe the person committed the crime, forensics or not, they're gonna find him guilty."

The two squared off about the role, if any, of "The CSI Effect" in the Scott Peterson and Blake cases.