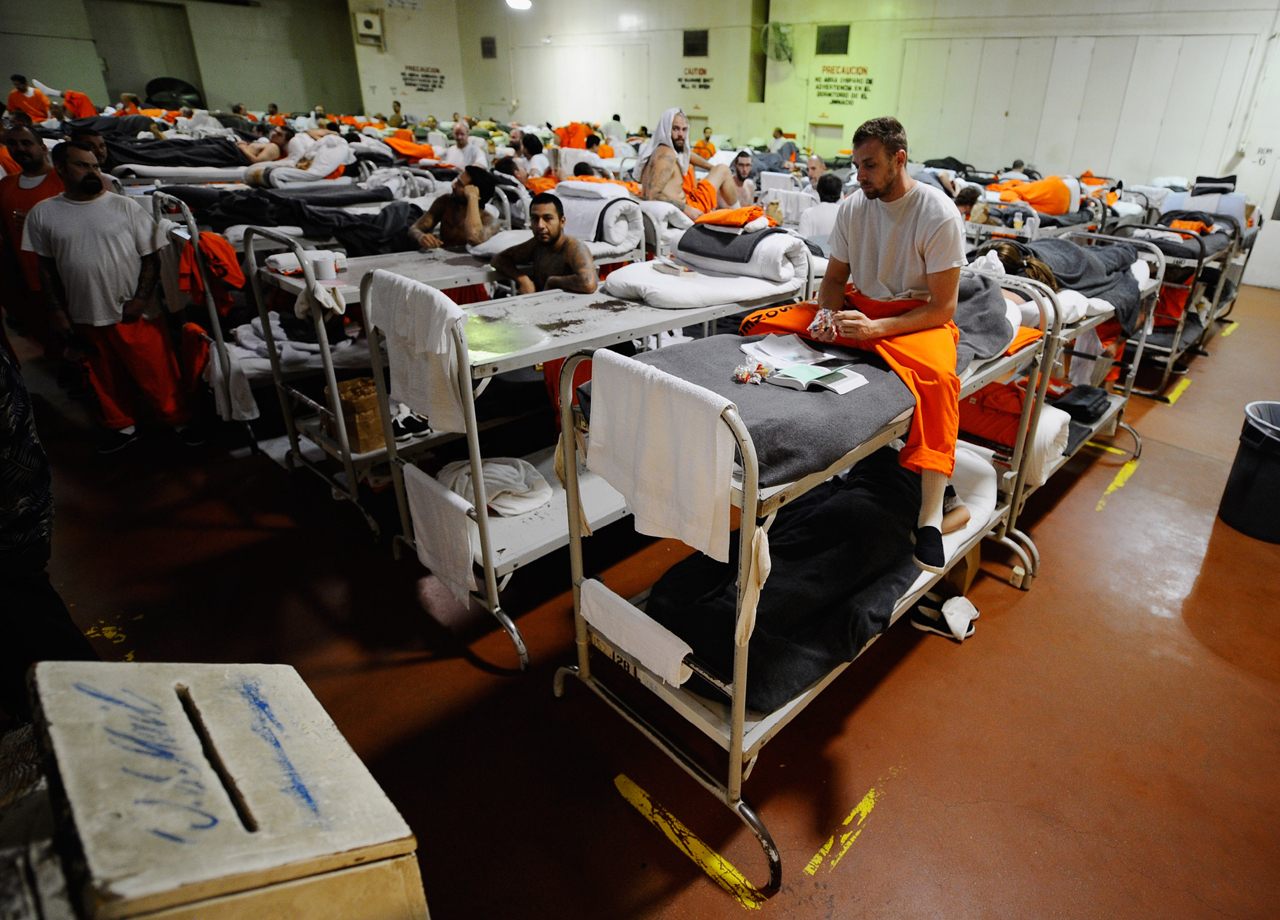 (CBS News) Is it fair to call the United States the "incarceration nation"? That's what some experts say. And even some veteran law enforcement and correction officials think something's gone wrong. Our Cover Story is reported now by Martha Teichner:

At the Gadsden County Jail near Tallahassee, Fla., there are bunks, and mattresses on the floor.

The jail has a capacity of about 150 inmates, but there are presently 230 inmates in the facility right now.

Walter McNeil, president of the International Association of Chiefs of Police, sees the same story everywhere he goes in the U.S.

In one "pod" of Gadsen jail, in which there are 24 bunks, there are 28 inmates - and by the time the weekend comes, there will be five or six more inmates.

That's nothing compared to California. Overcrowding was so bad there, the U.S. Supreme Court called it "cruel and unusual punishment," and last May ordered the state to cut its prison population by more than 30,000.

Nationwide, the numbers are staggering: Nearly 2.4 million people behind bars, even though over the last 20 years the crime rate has actually dropped by more than 40 percent.

The explosion in incarceration began in the early 1970s - the political response to an explosion in urban violence and increased drug use.

"So 'Tough on crime,' 'three strikes, you're out,' 'Let 'em rot, throw away the key' - all that stuff resulted in more mandatory sentencing, longer and longer sentencing," said Jacobson.

But nothing came close to the impact of the war on drugs. When it was announced in 1971, fewer than 40,000 people were incarcerated for drug offenses; now, it's more than half a million.

And here's the elephant in the room: Blacks use drugs at the same rate as whites, but go to prison more - nearly 3 out of 4 people incarcerated for drug possession are African-American.

"It's emblematic of the way in which race is contributing to mass incarceration," said Bryan Stevenson, executive director of the non-profit Equal Justice Initiative, and a professor at New York University Law School.

"How do you answer people who say, 'Well, the people who are in prison are bad people, and if they happen to be African-American, it's because there's a higher crime rate in the neighborhoods where these prisoners have come from'?" asked Teichner.

"I'd say for most, for many offenses, it's simply not true," replied Stevenson. "Drug use is not a problem unique to the African-American community. This problem is as great a problem in white communities, affluent communities, [where] we prosecute it differently.

"In communities of color, you see devastating consequences as a result of our policies. Now, one out of three black men between the ages of 18 and 35 is in jail, in prison, on probation or on parole."

Whatever the crime, if you go to the Equal Justice Initiative website, you'll see the 70-plus 13- and 14-year-olds sentenced to life in prison without parole in this country. Nearly two-thirds are children of color.

Bryan Stevenson appeared before the U.S. Supreme Court last month to argue that, even in murder cases, sentencing kids that young to die in prison is cruel and unusual punishment.

"We can't hide from these problems much longer, we really can't," Stevenson said.

U.S. Senator Jim Webb - ex-Marine and Vietnam War hero - couldn't be called soft on crime. The Democrat from Virginia has tried and failed to get Congress to address the comprehensive reform he is convinced can't wait.

"This is not a political winner, but it's a leadership necessity in my view," Webb said. "If you are a violent career criminal, you deserve incarceration. . . . But we can be much more adaptive in areas of non-violent crime, in length of sentences, and particularly in what we do with people when they begin to re-enter society."

In a bad economy, just the expense of incarceration is beginning to create converts among state legislators faced with disastrous budget problems. In 2011 alone, 15 states passed significant sentencing reform legislation. Democrats and Republicans united in their determination to cut prison populations.

Which is why, not far from Tallahassee, the State of Florida is building a so-called re-entry center for 400 non-violent inmates.

Here they'll cost taxpayers HALF what the state would spend on keeping them in prison.

"This is the smart way of trying to deal with our prison population," said Chief McNeil. "We know that the vast majority of the people in prison are going to return to prison unless we do something different."

Doing something different at the Gadsden County Jail, a few miles away, means teaching prisoners basic skills they'll need when they get out - like how to dress for success, and how to interview for a job.

But criminologists don't. They see education as one tool among many that can help keep people from going back to prison.

At California's formidable San Quentin Prison, inmates are encouraged to enroll in the Prison University Project. In a class on Greek tragedy, every man here took the plays personally.

But here are the statistics, from the U.S. Department of Justice: More than 50 percent of ex-prisoners will be back behind bars within three years.

So, how to keep them from going to prison in the first place, whether by rethinking the old lock-'em-up-throw-away-the-key mentality, or preventing crime with beefed-up policing in high crime areas?

"No one can really explain exactly why," said Jacobson. "The changing nature of the economy, change in drug use patterns, more targeted policing . . . But one of the things we know going forward, if we want to both continue and drive down crime even further, is that increasing the size of our prison systems will not get you there."

Was it merely a drop in the bucket? Or was it the beginning of the end of our epidemic of incarceration?

EDITOR'S NOTE: A transcription error mis-stated the cost per inmate as $47,421 per year. That is the annual cost of an inmate's care in California. The average cost among 40 states surveyed by Vera Institute of Justice is $31,307.