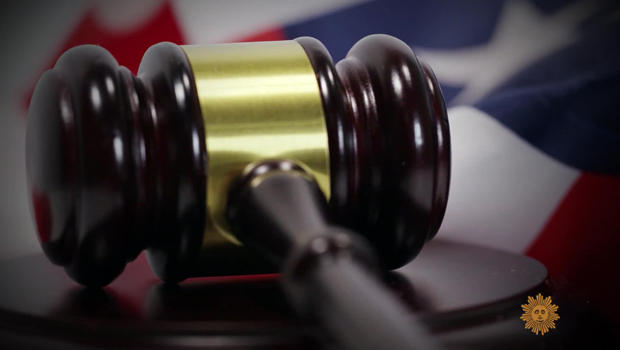 The 911 audio recording of an eyewitness to an arrest, and the subsequent video of the suspect being pummeled, documented the takedown in Grand Rapids, Michigan back in 2014. "I don't know if these are undercover officers that are on top of this man, but this man is screaming, 'Call the police, call the police,'" said the caller to 911. "So, I don't know what's going on, but they're beating him up, they're literally assaulting him."

The guys on top are, in fact, undercover cops. The shirtless man is a criminal suspect, emphasize "suspect." James King just had the stuffing knocked out of him because he bit one of the cops.

"I bit the officer on the arm because he put me in a chokehold, and I blacked out, and when I came to, that was the only thing I could do to save my life at the time," King said.

Senior contributor Ted Koppel asked, "And then what happened?"

"He let go, eventually, but then he proceeded to punch me in the head until I couldn't move anymore," said King.

Which brings us to what may be the central argument for a legal doctrine known as "qualified immunity." You don't want law enforcement officers taking down a potentially dangerous suspect, worrying about the possibility of a civil lawsuit.  As Jack Collins, who was general counsel for the Massachusetts Chiefs of Police Association for more than 40 years, explained. "It comes down to police officers saying: 'Tell me why it is that I have to make this quick decision, use the best information I have, and if later on somebody finds that I made a mistake, I may lose my house, my pension?"

James King and the actual suspect didn't really look much alike. But well, mistakes do happen. King can tell you all about that. He was working two jobs back in 2014, and was on his way from one to the other: "Two gentlemen, scruffy lookin' guys, backwards ball caps, came up to me and said, 'Hey, who are you?' And I said, 'Hey, I'm James.' You know, 'What's up? What's goin' on?' The first guy asked, you know, 'Is that your real name?' I said, 'Well, yeah, yeah. Of course that's my real name.' Then the other guy stole my wallet out of my pocket."

King confirms that they had badges around their necks, but thought they were fake. Police say they were checking for his ID when one of them took his wallet.

"That was the moment where I thought I was being mugged, and I turned to run," King said. "And a fight ensued and I started to yell for the police."

"But as a consequence of your fighting back against what you think is a mugging, you are now accused of assaulting a police officer?" asked Koppel.

"I did, for nine months, felt like I was living in a nightmare and unsure of whether or not I was going to go to prison for a crime that I didn't commit."

King was lucky. Even luckier, he said, because he is White: "My criminal trial attorney, one of the first things he said to me after I told him what happened, he looked me in the eyes and he said: 'If you were Black, they would've killed you.' I knew he meant it. And that has always stuck with me."

So, to repeat, King was lucky (a) because he's not dead, and (b) after legal proceedings that dragged on for many months, a jury found him not guilty of assaulting a police officer. He said, "When I spoke with my criminal attorney, he told me this thing happens more that you would hope. And most of the people that try to fight these things don't win. Many people that have had happen to them what happened to me, they're in jail right now, or worse."

But what about the arrest that set all of this in motion? Couldn't King sue law enforcement for damages? Well, he could, and he did, and attorneys for the cops invoked qualified immunity.

Jack Collins, who provides legal advice to police agencies, said, "Most cops, quite frankly, don't think about qualified immunity. They have no idea what it's about. And they just know, basically, by and large were I to make a mistake, I'm not gonna get sued and have my house taken."

And, in fact, in James King's case, a district court determined that the officers were entitled to qualified immunity because, given the circumstances, their actions were reasonable. That decision was appealed and overturned. The case is now awaiting further action from the Supreme Court. Again, this has been going on for six years.

Shaniz West's case has been going on just about that long. Several years back she returned to the house she was renting near Boise, Idaho to find the police waiting. She told Koppel, "They let me know they were looking for a suspect, Fabian Salinas, which is my children's father. I had let them know that he was there earlier, grabbing his belongings, but that I was unsure if he was in the home at the time. They then asked me if they could enter the home to get Fabian.

"They threatened me, saying I can be charged with felony – harboring a fugitive."

From a recording made at the time:

Officer: "Let me tell you this, OK? He's got a felony warrant for his arrest. If you harbor him, you're going to jail for felony harboring."
West: "Wait, what?"

So, West said, she told the officer they could enter and gave them her keys.

"But instead of opening the door and perhaps risking the life of a police officer, they call the SWAT team?" said Koppel. "And what did the SWAT team ultimately do?"

"They shot tear gas into my home through the front, and also the back of the home," West said. "They destroyed windows, doors. An officer fell through a crawl space. They just ransacked my home and destroyed it, and left it."

Police could have used the key; but, in fairness, though the suspect they were looking for wasn't in the house, there was a dog, so police did hear movement.

West, meanwhile, was homeless. "We stayed at my grandmother's for two weeks," she said. "And then from there, we were kind of just with family members from couch to couch."

West sued, and police invoked qualified immunity. Their argument has a certain bizarre poetry to it: by giving police the keys to her house, West in effect consented to whatever action police took to search the house for the suspect. A lower court wasn't buying that argument, but an appeals court did.

During a hearing in the case of Shaniz West v. City of Caldwell, the defense attorney argued, "Did defendants exceed the scope of consent by using tear gas and causing damage to plaintiff's property? The answer to that question is no."

The Supreme Court has declined to hear the case. So, West, it appears, is out of legal options, and out of luck.

"When I looked at almost 1,200 cases that were filed around the country, I found that a small proportion of those cases, less than 4%, were actually dismissed because of qualified immunity," Schwartz said.

Attorney Robert McNamara, at the Institute for Justice, a non-profit law firm that represented Shaniz West and James King, said qualified immunity flips the usual way of thinking about things on its head.

Qualified immunity, he explains, can also apply where there is no previous court ruling on a case exactly like the one you're arguing. "What that means is that government officials have free rein to violate your rights as long as they manage to violate your rights in a way that nobody ever thought of before."

Koppel asked, "So, George Floyd's family, for example, if they were to ask for any damages from the city, in theory, at least, qualified immunity could be invoked?"

"That's absolutely right," McNamara replied. "The question asked in that case will not be whether it was right or wrong for those officers to act as they did; the question, as odious as it seems, is actually going to be, for purposes of qualified immunity, whether the jurisdiction already has cases about kneeling on someone's neck, and exactly how many seconds did the officer in that earlier case kneel on someone's neck."

That's one, enormously powerful argument against qualified immunity. Call it the "outrage" argument.

But more to the point, if George Floyd's family gets a large financial settlement, it most likely won't be the individual cops who pay – qualified immunity, says professor Schwartz, isn't necessary to protect the police: "Union officials and other defenders of qualified immunity use two talking points repeatedly in defending the doctrine: that officers will be bankrupted if qualified immunity goes away, and that good officers who make reasonable mistakes will be found liable. And neither of these things are true, because officers virtually never pay as a consequence of indemnification agreements."

Case in point: earlier this month the City of Louisville, Kentucky agreed to pay $12 million to the family of Breonna Taylor, who was shot and killed by police in her home.

None of that money will be paid by the officers involved.