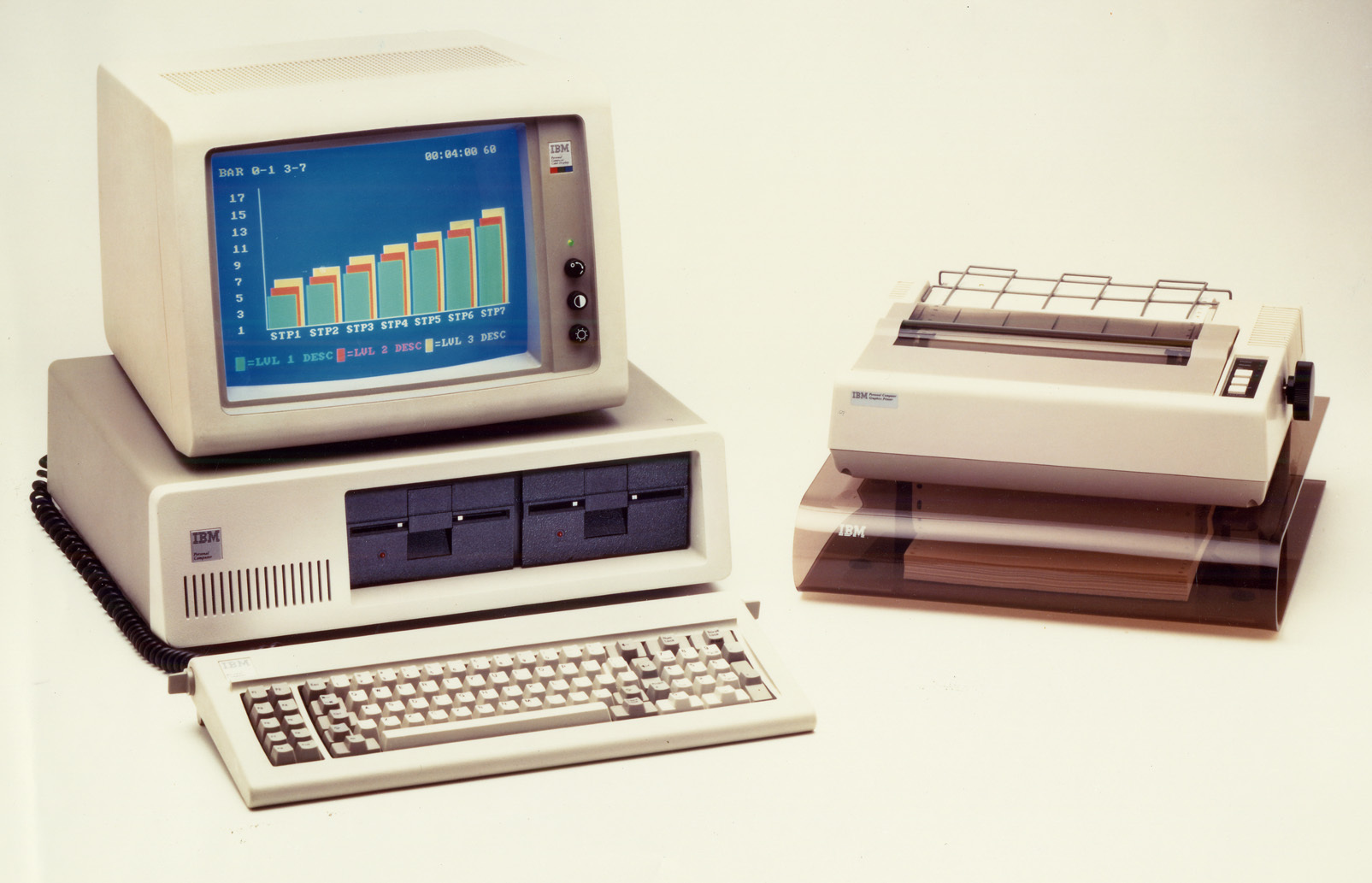 Most people in the Western world walk around with a powerful computer in their pocket or purse, otherwise known as a smartphone. It's not unusual to see someone clutching a legal pad-size gadget on airplane flights, such as an iPad, to read books. It's nearly impossible to walk into a coffee shop without finding someone pecking away at a trim notebook computer, checking e-mail and surfing the Web.

The lineage of all those devices, in one way or another, flows directly back to a press conference some 30 years ago tomorrow. On August 12, 1981, IBM rented out a ballroom at the elegant Waldorf Astoria Hotel in New York and introduced its landmark 5150 personal computer.

Looking at the beige box today, nothing seems particularly remarkable. The rectangular CPU, with two black bays for floppy disks, isn't a marvel of design brilliance. There's nothing striking about the lines, the graphics, the color palette. The 5150 wasn't even the first PC. Apple, Atari, and Commodore produced so-called microcomputers that preceded it. And IBM's creation was inferior in some ways to those rivals.

But the 5150, more than any other computer before it, launched the PC revolution. It changed the way we work, the way we communicate, the way we entertain ourselves. That nondescript hunk of metal led to innovations that upended industries. More than any computing device before it, the 5150 changed our world.

The great revelation of the 5150, the reason it changed so much while earlier computers remained hobbyist gadgets, came in the way it was made. Nervous, particularly about the advance that the Apple II was making in computing, IBM raced to come up with an alternative. With time pressure, IBM chose to build its new machine from non-IBM components, a foreign concept for the insular company. That enabled the team to develop the product in 12 months, faster than any other product in IBM's history at that time.

Making a computer with off-the-shelf parts unleashed the industry. IBM used Intel's 8088 computer processor. For its operating system, IBM first turned to Digital Research Inc., hoping to license its CP/M. But, in a tale that has become legend in techdom, DRI hesitated and provided an opening for an upstart company, Microsoft, to offer an alternative operating system, PC-DOS, based in part on CP/M.

"You needed that spark of innovation that changed the paradigm," said Paul Bloom, chief technology officer of telecommunications research at IBM. "It really expanded the market."

IBM created the model that continues to pervade the PC industry. Relying on other companies to build parts for your technology was radical thinking at the time. Time pressure forced IBM into the strategy. But ultimately, it led to rapid innovation as niche component makers and software developers invested money and energy into improving their piece of the puzzle.

That turned IBM into a master assembler, a role that was easy for others to replicate. And that's exactly what rivals did. Within two years, Compaq Computer produced the first IBM PC clone, using the identical architecture, something IBM made publicly available so that other companies could easily make compatible software and peripherals. Within just a few more years, the market was flooded with clones, securing spots at the heart of the computing industry for Intel and Microsoft and, somewhat ironically, ensuring a diminished role and sliding market share for IBM.

Later that decade, as the PC industry began to take shape, IBM recognized the importance of controlling the operating system. It developed OS/2, the next-generation operating system with Microsoft. At the same time, Microsoft was developing a rival operating system called Windows. The partnership fractured in 1990 and Microsoft's Windows went on to dominate the PC operating system business. Those early IBM decisions--particularly opting for a third-party operating system and ultimately choosing Microsoft's PC-DOS rather than DRI's CP/M--ultimately played a huge role in shaping the computer industry today.

That first 5150--made up of a system unit, a keyboard, and a color graphics capability--cost $1,565. Consumers needed to shell out more money for options such as a display, a printer, diskette drives, and extra memory. The 5150 originally weighed 21 pounds without the diskette drives, 28 pounds with two of them. It contained 40 kilobytes of read-only memory and 16 kilobytes of user memory, before adding the diskette drives. Compare that, for example, to the new, sleek Samsung Series 9 Notebook, which weighs 2.88 pounds and comes with a 128-gigabyte hard drive and 4 gigabytes of system memory.

The 5150 was a roaring success, helped in no small part by some of the most iconic advertising of the day. IBM wanted to convey the idea that anyone could use its new computer. So it settled on ads featuring Charlie Chaplin's tramp character, portrayed by mime Billy Scudder, as a lovable simpleton that could be coaxed into using the new machine.

It says much about how the computer industry has changed that IBM is no longer in the business of making PCs. The company sold its PC business to Chinese PC maker Lenovo for $1.75 billion in 2005. IBM recognized that the PC business was becoming increasingly commoditized, something it had started with the 5150. And it recognized that the once rapid growth of the market was a thing of the past.

"Just as we grow and mature, so does technology," IBM's Bloom said. "I don't know that the PC is dead. But it's certainly not growing the way other technology is growing."

These days, much of technology's growth comes from mobile devices. Smartphones and tablets, already far more powerful than the original 5150, are taking on functions that were once the domain of PCs, such tasks as e-mail, Web browsing, and even document creation and editing.

IBM is focused on even smaller computing devices, sensors, as the one of the next great paradigm shifters. Sensors are popping up everywhere, in appliances in people's homes to devices they wear on their bodies to traffic signals in major cities. And they're all collecting data and feeding that information to computer systems to analyze and act upon. IBM, whose great strength is collecting and analyzing data, is working to standardize the technology to make it more ubiquitous and more useful.

And yet, as all these other forms of computing emerge, the personal computer industry sparked by the 5150 rolls on, even if it won't return to the growth rates of its early days. Ever-thinning notebooks, such as Sony's new two-thirds-of-an-inch-wide , keep hitting the market. , which automatically connects to the Internet and doesn't require local storage, changes the notion of personal computing.

It all started at the Waldorf Astoria 30 years ago tomorrow.

The world's largest music streaming service is moving into new territory
Thanks for reading CBS NEWS.
Create your free account or log in
for more features.
View CBS News In
CBS News App Open
Chrome Safari Continue
Be the first to know
Get browser notifications for breaking news, live events, and exclusive reporting.