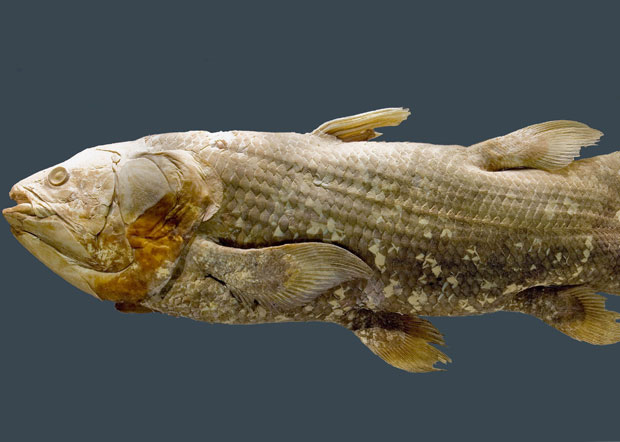 NEW YORK Scientists have decoded the DNA of a celebrated "living fossil" fish, gaining new insights into how today's mammals, amphibians, reptiles and birds evolved from a fish ancestor.

The African coelacanth is closely related to the fish lineage that started to move toward a major evolutionary transformation, living on land And it hasn't changed much from its ancestors of even 300 million years ago, researchers said.

At one time, scientists thought coelacanths died out some 70 million years ago. But in a startling discovery in 1938, a South African fish trawler caught a living specimen. Its close resemblance to its ancient ancestors earned it the "living fossil" nickname.

And in line with that, analysis shows its genes have been remarkably slow to change, an international team of researchers reported Wednesday in the journal Nature.

Maybe that's because the sea caves where the coelacanth lives provide such a stable environment, said Kerstin Lindblad-Toh, senior author of the paper and a gene expert at the Broad Institute in Cambridge, Massachusetts.

Modern coelacanths make up two endangered species that live off the east coast of Africa and off Indonesia. They grow to more than 5 feet (1.5 meters) long and have fleshy fins.

The coelacanth's DNA code, called its genome, is slightly smaller than a human's. Using it as a starting point, the researchers found evidence of changes in genes and in gene-controlling "switches" that evidently aided the move onto land. They involve such things as sense of smell, the immune system and limb development.

Further study of the genome may give more insights into the transition to living on land, they said. Their analysis concluded that a different creature, the lungfish, is the closest living fish relative of animals with limbs, like mammals, but they said the lungfish genome is too big to decode.

The water-to-land transition took tens of millions of years, with limbs developing in primarily aquatic animals as long as nearly 400 million years ago, by some accounts, and a true switchover to life on land by maybe 340 million years ago, said researcher Ted Daeschler.

Daeschler, curator of vertebrate zoology at the Academy of Natural Sciences of Drexel University in Philadelphia, who didn't participate in the new work, said genome research provides a way to tackle some previously unanswerable questions in evolution.

He emphasized that DNA is best used in combination with fossils.

"This is a great detective tool," he said. "You might collect DNA evidence at a crime scene, but you can't ignore the dead body.... With paleontology, we have the dead bodies."