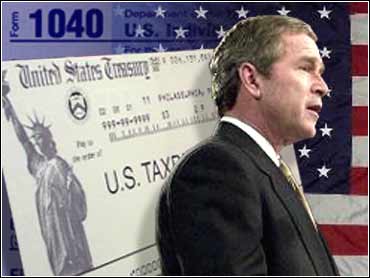 The Bush administration wants Americans to know their tax refund checks will soon be in the mail. If private economists are right, the checks of up to $300 per person will be arriving just in the nick of time to avert a full-blown recession.

"This will give a much needed boost to the economy and could very well make the difference between an economy that continues to grow and one that slips into recession," said Mark Zandi, chief economist at Economy.com.

Congress, under heavy pressure from the administration, overcame doubts and retained the refund mailout in the final version of the $1.35 trillion, 10-year tax cut program passed last Saturday. The tax relief slated for this year totals $55 billion.

While the current schedule calls for the first of an estimated 95 million checks to start showing up in mailboxes in late July, Treasury Secretary Paul O'Neill said Wednesday he was not satisfied with a time table that would not have the bulk of the mailings completed until the end of September or later.

He said he was applying pressure to IRS officials to get the job done more quickly.

"We may not be able to do better than (September), but I am not satisfied that we can't," O'Neill told reporters after a meeting with top officials overseeing the operation.

The IRS plans to send the checks out at a rate of 11 million per week, the first such massive tax refund operation conducted since the Ford administration sent out $200 refund checks in 1975.

Click here for more on the history of U.S. taxes…
Or here for more on the 107th Congress.
By July 15, everyone who filed a tax return in 2000 will receive letters telling them how much of a refund they will be getting and an estimate of when the checks will arrive. The actual check mailings will be based on the last two digits of the Social Security number of the taxpayer listed first on the 2000 return, starting at 00 and going through 99.

The amount of the refund check will be based on the taxpayer's 2000 income tax return. The maximum will be $600 for married filers and $300 for single filers.

The refund checks will come to 5 percent of taxable income, up to $6,000 for an individual filer and $12,000 for a couple filing jointly.

While the amount of the check will be based on 2000 income figures, the refund is being mailed to reflect the decision by Congress to lower the bottom tax rate to 10 percent from 15 percent, retroactive to Jan. 1 of this year.

The administration pushed for the checks because of a belief that the economy needed the jolt provided from a quick infusion of cash. Also helping this year will be half-point cuts in other individual tax rates that will be elt more gradually as employers adjust withholding rates.

Private economists said all the tax relief is coming at a critical time. Economic growth came to a near standstill of just 1 percent for the gross domestic product in the final three months of last year and 1.3 percent GDP growth in the first three months of this year.

By a standard definition, a recession occurs when the GDP, the economy's total output, is negative for two consecutive quarters.

But because of the rebates, analysts were predicting a much better performance in the second half of this year. Wyss said GDP growth could average 3.5 percent in the July-December period.

"We expect Americans will spend close to half of their rebate checks. This will have quite an impact in the second half of this year," Wyss said.

"Roughly half the population is struggling and living almost pay check to pay check," said Zandi. "Those folks will use the rebate almost immediately."

Zandi said the checks would come in time to help many Americans pay back-to-school bills and everyone would have the money in time for Christmas shopping.

Critics of the refund idea have raised the specter that thousands of checks will go astray, sent by the IRS to the wrong addresses because people have moved. IRS officials advise that people who have moved should make sure they have filed a change of address form with the Post Office.

O'Neill said he believed the IRS, which has come under heavy criticism for its performance in recent years, would prove to be more than equal to the challenge of getting the checks into the right hands.

"I think you will see that the Treasury and the IRS stand up really well to high standards and excellence in how this job is done," O'Neill said. The success, he added, would come from "thousands of unsung heroes" at the two agencies.