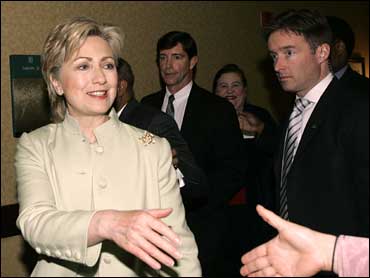 This column was written by William Greider.


Considering the formidable advantages Hillary Clinton has assembled for 2008, why should anyone feel sorry for her? Because the senator is in a trap, and many of her assets have swiftly turned into liabilities. This predicament is largely of her own making, but also of changed circumstances she did not foresee. Front-runners have often fared poorly in Democratic nominating contests during the last 30 years, especially when establishment insiders promoted an aura of inevitability for them. Hillary is a candidate for the same fate.

Inevitability actually is (or was) her core strategy. For six years, talented ranks of Clintonistas have assiduously worked Washington and Wall Street to create that expectation for her. They promoted romantic yearnings for a Clinton restoration in the age of George W. Bush. They amassed awesome advantages to scare off less famous opponents or, if need be, to crush them. Senator Inevitable has all the money and brains and influential connections. Plus, she has a rock-star-popular husband, the ex-President, who's a brilliant strategist and performer.

What could go wrong? Well, things changed — dramatically — and the front-runner now finds herself scrambling to catch up with the zeitgeist. The watershed election of 2006 confirmed that Bush and the conservative order are in collapse. That inspires Democrats to embrace a far more ambitious sense of what's possible. Senator Clinton, the brainy policy wonk conscientiously calculating her next move, suddenly seems miscast for an era when Democrats are on offense and bolder ideas are back in play.

Clinton's great vulnerability was captured brilliantly by Barack Obama in a single sentence, without a mention of her name. "It's time to turn the page ..." People are looking forward, not back, he declares. People long for a promising new generation in politics. Let's not turn back to old fights, the acrimony of decades past.

Nothing personal. But Hillary Clinton is the past.

When she cites the family accomplishments — his and hers — or reminds audiences that "Bill and I" stood up to the vicious right-wing assaults, it sounds almost as though she is offering a co-presidency. If anyone misses the connection, the former President seems to be everywhere, touting his own thoughts on how to govern the country (presumably cleared with her, but who knows?).

This is the central tension in Senator Clinton's campaign. It's what makes her sound conflicted. Does she intend to emulate the risk-averse, center-right juggling act by which her husband governed? Or, as she sometimes suggests, will Clinton II be more aggressively progressive, less beholden to business and financial interests, more loyal to the struggles of working people? Senator Clinton tries to have it both ways: running on her husband's record and popularity, yet hinting she will not be like Bill.

That sounds like a tough sell. Some Democrats love him forever; others still loathe him for what he did or failed to do in office. The Senator seems to be betting that nostalgia will prevail among party faithful, perhaps accompanied by amnesia. In any case, this contradiction undermines her aura as a forceful leader. Bill Clinton had the persuasive skills to get away with this, charming even those he had betrayed. Hillary Clinton may lack the insincerity to pull it off.

Senator Clinton's struggles are visible in her repeated efforts to recalibrate her positions on major issues — adding a little muscle each time, but always a step or two behind public opinion. A year ago, she was still straddling the gut question of withdrawing from Iraq. Now she wants action in 90 days. She is molting a little, but still sounds more comfortable as a hawk.

The demands for an apology on her original go-to-war vote is not the point. It reflects a deeper suspicion that Hillary is as cynical as Bill on the fundamental matter of warmaking. One recalls Bill Clinton's scolding advice to Democrats after they lost the 2002 Congressional elections. People, he said, would "rather have someone who is strong and wrong rather than somebody who is weak and right."

Globalization and trade — another deeply divisive issue for the party — has produced a similar dilemma for Senator Clinton. She keeps ratcheting up her position, step by step, even voting against CAFTA in 2005. But she cannot embrace fundamental reforms (and mean it) without colliding with her husband's championing of free trade and with Robert Rubin, whose Wall Street money-raising machine will be a major factor in financing her campaign. If she did divorce herself from the Clinton-Rubin doctrine, that would create other problems for her.

The Senator has one more problem, and his name is Bill. She and the Clintonistas probably regard the former President as their greatest asset, but he has the personal potential to become a fatal liability. I do not refer to the scandalous behavior that over the years has occasionally humiliated his wife (though that risk provides constant grist for insider gossip). I mean the threat that Bill Clinton simply won't get off the stage. He loves to talk and collect popular adulation, and people love to hear him. Last fall, he held a glamorous 60th birthday party in New York that lasted three days. He has the capacity — unconsciously or otherwise — to steal his wife's show just by being himself.

One thing we know from the past is that Bill can't help himself. Self-control has never been his strong point. But, as we also know from experience, Hillary Clinton and her campaign staff can't control him, either. His egotism poses a real and present danger to her ambitions.

I am mischievously reminded of Lurleen Wallace, another political wife, who stood in for her husband when George Wallace was ineligible for another term as governor of Alabama. But that seems unfair. Hillary Clinton is accomplished in her own right and she has twice been elected as a senator from New York.

A more poignant comparison is with Senator Edward Kennedy, another inheritor of the family mantle. After his older brothers were killed, Teddy Kennedy was propelled by legendary expectations that he would someday run for President and restore the Kennedy name to the White House. When he finally did run but lost his party's nomination Kennedy, ironically, was freed to fulfill his real talent as a legislator and become the courageous and savvy liberal lawmaker of lasting fame. If Hillary should lose in '08, perhaps she will be liberated, too.

By William Greider
Reprinted with permission from the The Nation