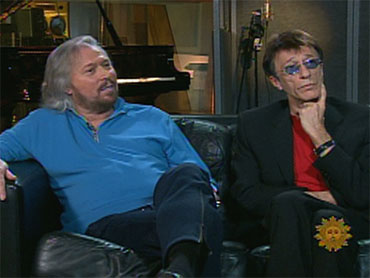 Hit songs such as "Jive Talkin'" won the Bee Gees a place in the Rock and Roll Hall of Fame. Now, in the aftermath of personal loss and estrangement, the two surviving Bee Gees are back in harmony once again. Anthony Mason makes a visit. . .

It's been awhile since we've heard from the Bee Gees . . .

"You know, it's been a few years since we've heard our voices together," said Barry Gibb.

But Barry and Robin Gibb have started rehearsing again.

"Does it come back easily?" asked Mason.

"Yeah, and the more you do it the stronger it gets," said Barry.

After the sudden death of brother Maurice nearly 7 years ago, one of the world's most popular groups went silent. But now the two surviving brothers, working at Barry's home studio in Miami, are taking tentative steps to bring back the Bee Gees:

"The blend, the voice is great. Even I get nostalgic," said Barry.

It's not their first comeback, of course. Over their 50-year career, the Bee Gees have endured commercial droughts, critical disdain, and the disco backlash, to sell more than 200 million records.

"Is that something you developed or was it always just there?" asked Mason.

"We were never taught music or harmonies," said Robin. "We just sang what we felt."

The 3 oldest Gibb boys started singing together as kids in England.

When the family emigrated to Australia in 1958, the brothers got a record deal and a TV show. But the Bee Gees wanted a bigger stage:

"We knew that to reach the rest of the world, we had to be either in the States or London," said Robin. "We had to be where the action was."

So in 1967 they boarded a ship back to England:

"You didn't know enough to be scared at the time?" asked Mason.

"The word 'no' and 'damn the torpedoes' was part of our psyche," said Robin.

Within weeks of arriving in London, the brothers were signed by producer Robert Stigwood:

"Is that what he said, really?" asked Mason.

Stigwood quickly sent them into the studio to cut a record:

"It was late-ish in the evening and Robert said, 'Listen, you know, we're still looking for something that we can say,Listen this could be a hit. All this stuff is good, but I need something that's an obvious hit.'"

So they went out into the stairwell to run through some ideas:

"And while we were singing the lights went out, and that inspired the idea of being trapped in a coal mine," said Barry,

"New York Mining Disaster 1941" landed them on the charts.

By the end of 1967 they'd have three more hits - "To Love Somebody," "Holiday" and "Massachusetts." The Bee Gees were international stars:

But after a five-year run their songs suddenly stopped making the charts. They were in what Barry called "the wilderness."

"Do you sit there during that and say 'I've written all these hits. How come I can't write one now?'" asked Mason.

"I just think we felt, and the industry felt, that we'd run our course," said Barry.

"Did you think it was over?"

It was Eric Clapton who recommended a change of scene: Miami.

We went back with Barry and Robin to Criteria Studios, where in 1975 they turned their career around:

"Were you consciously trying to reinvent yourselves?" Mason asked.

"I think we were looking for inspiration," said Robin.

They found that inspiration on a daily drive over a causeway to Miami Beach:

"It was a clickety-click noise that the car made every night when we were coming back to 461," Barry said. "It still happens today when you go over this bridge."

That clickety-click led to "Jive Talkin'," which took the Bee Gees back to the top of the charts.

"We finished 'Nights on Broadway,' the main vocals, and Arif said, ''You know, can one of you scream in tune?'" Barry recalled.

That's how he found his famous falsetto. "And it wasn't just able to be a scream, but it could sing a song - this other voice that was in there, you know? And it was literally a discovery."

As their new white-soul blend of funk & falsetto was producing another string of hits, Stigwood asked them for a few new tracks for a small film he was making about the disco scene:

"We didn't really foresee certainly how big it was going to be," said Robin.

"Saturday Night Fever" wasn't just a monster hit record. It was a worldwide cultural tidal wave - #1 for 6 months, it would sell 40 million copies.

By April 1978, the Bee Gees had written 5 of the top 10 songs on the charts. Not since the Beatles had one band so dominated the airwaves:

"You were everywhere in the world," Mason said.

"Yes, we were extremely overexposed!" laughed Barry. "But it's the truth. You know, we were having too much success. In fact, we had three in the top 5 in Billboard, not just five in the top 10. And it was just too much."

When the disco backlash hit, the Bee Gees were the punching bag:

"In some respects, do you regret the success?" Mason asked.

"We had the time of our lives," Barry laughed, "but we got beat up. I mean, it was painful. We got beat up. If you have too much success, you get punished."

"At some point in the middle of the backlash, did you resent it?"

"Of course," Barry said. "You can't be wonderful to everyone one minute and terrible to everybody the next. We were pretty well devastated by it, you know? And that took us about two to three years to regroup, mentally, emotionally.

"You know, I can't wear a white shirt, you know? We can't wear chains around our necks."

"Other people can!" said Robin.

"Other people can, but we can't," said Barry.

So the brothers retreated, writing hits for other artists, like Barbra Streisand ("Guilty"), Dionne Warwick ("Heartbreaker"), and Kenny Rogers & Dolly Parton ("Islands in the Stream").

"I got the sense you were saying, 'Look, we're tired of being the joke.'" Mason said.

But that same year, the Bee Gees were recognized by the Rock and Roll Hall of Fame. Respect had finally been paid.

But in 2003, Maurice Gibb, who was just 53, died suddenly from a tangled intestine. "He was absolutely fine one day, and 48 hours later he was dead," said Barry.

They'd already lost their youngest brother, Andy, who died in 1988 after years of battling drugs.

Barry and Robin admit that Maurice's death divided them:

"We just were unable to communicate with each other," Barry said.

"I think we got afraid of each other," Robin said. "I don't know what it was."

"I was polarized," said Barry. "I had no passion, no interest in continuing at all, you know? Robin went the opposite direction, and had to keep moving."

Robin described it as seeking "distraction" - and a fear of Barry.

"I was afraid because I knew where Barry was emotionally," Robin said. "And I knew that his way of expressing himself [was] by not going forward, by not being a Bee Gee."

"The fear factor was the pressure thing," Robin said. "Was I putting pressure on Barry?"

After talking it over, Barry and Robin are in harmony again. Time move on without ever letting go of Mo.

To celebrate the Bee Gees' 50 years of making records, a series of releases are planned over the next year.

And Barry & Robin have started writing songs together again.

"We still have a lot of music in us," Barry said.

They've written or performed 15 Number One hits. That music never left us. But the Bee Gees themselves are back.