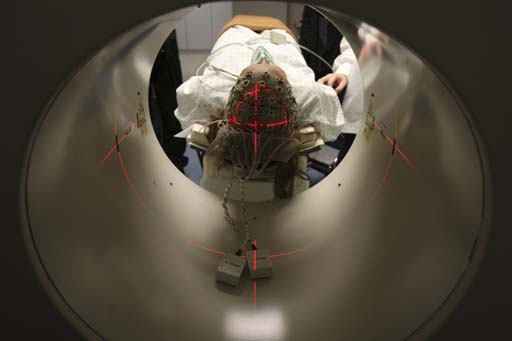 NEW YORK -- A standard brain scanning technique is showing promise for helping doctors distinguish between patients in a vegetative state and those with hidden signs of consciousness.

A study released Thursday is the latest to investigate using technology to help meet the challenge of making that distinction, which now is generally based on a doctor's bedside exam.

Patients in a vegetative state have open eyes and show periods of sleep and wakefulness, but they are unaware of themselves or others and unable to think, respond or do anything on purpose. Patients in a minimally conscious state show only intermittent and minimal signs of awareness of themselves or their environment.

Distinguishing between those two conditions is important because patients with even minimal awareness can be treated to help them communicate and to prevent suffering. They respond much better to stimulation from medication or sounds, touch, music and odors.

In the new research, released by the journal Current Biology, researchers from Denmark, Belgium and Yale University investigated using so-called FDG-PET scans to measure the brain's consumption of blood sugar, which brain cells use as fuel. They sought to establish a specific level of consumption that could distinguish between the two groups of patients.

They studied 49 vegetative patients and 65 minimally conscious ones, diagnosed by standard bedside procedures. They found that using a particular cutoff for PET scan results, they could correctly identify patient status 88 percent of the time.

The researchers checked the patient status again a year later. They found that eight of the 11 vegetative patients who had scored above the cutoff, which had been associated with minimal consciousness, had in fact recovered consciousness. The other three had died.

Three minimally conscious patients had scored below the cutoff. Of the two patients the researchers could find a record for, one showed no change and the other had died.

Dr. Nicholas Schiff, a professor of neurology and neuroscience at the Weill Cornell Medical College in New York, who didn't participate in the work, called the work "very important." Such tests could encourage early diagnosis and promote proper care, he said.