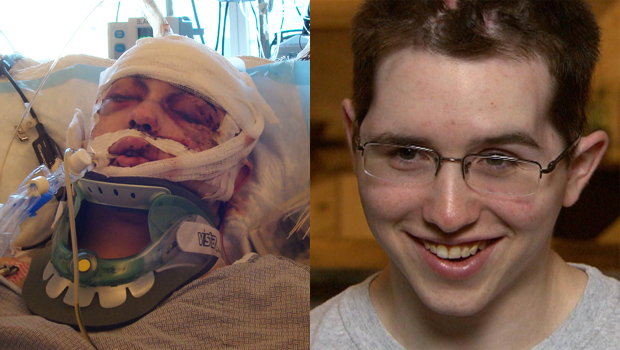 "Just keep goin'" are words that are easy to say, much harder to live by. Yet one young man who suffered a near-fatal injury is managing to live by that principle, and then some. Lee Cowan has his story:

Despite what Dylan Rizzo may say ("I'm not very good, but I gotta get it done"), his bowling skills are actually pretty good, especially when you consider what Dylan has been through.

When asked if they'd doubted Rizzo would be back having beers with them again, his friend Alex MacEachern said, "It wasn't necessarily a doubt."

Ryan Perkins added, "The reports that we were getting from the parents were, you know, he shouldn't be alive right now."

Five years ago Dylan, then 19, was driving to Ryan's house to play video games. His car hit a patch of black ice and he spun sideways into a telephone pole.

His parents, Steve and Tracy, got the call every parent fears.

"The pole seemed to hit him directly on the head," Steve recalled, "and from there he went forward and hit the windshield and had more damage on the other side, so he had an impact, and then a second impact."

Tracy said that where Dylan sat, "there was a big indentation in the car."

He was rushed to Massachusetts General Hospital in Boston. Within an hour neurosurgeons had removed the left side of his skull and part of the right to make room for his brain to swell.

But Dylan had slipped into a deep coma.

Remembering the first time he saw Dylan after the accident, Alex MacEachern said, "I just remember standing, and not being able to move my feet. I wasn't going to pass out, but it was just extremely surreal."

Dylan had been an athlete. He was an accomplished track star, and rooted passionately for his Lynnfield High Pioneers. But the accident had done a shocking amount of damage to his brain.

Dylan remained in his coma for more than two weeks. He did finally open his eyes, but while he was technically awake, he wasn't aware of his surroundings. He had transitioned into what's called a vegetative state.

A month later, there hadn't been much improvement.

Doctors broke the news to his parents that unless he came out of it soon, Dylan would likely stay in that vegetative state for life.

"Our family was in the waiting room," Tracy recalled. "And I said, 'We can't come out and tell our family that. I can't even say these words. I can't say it.'"

But one man, Joseph Giacino -- not a medical doctor, but a researcher brought in to study the case -- thought that Dylan's brain might just need more time.

"We were sort of lumping everyone into this vegetative state category," he told Cowan.

A neuro-psychologist at Boston's Spaulding Rehabilitation Hospital, Giacino is among a growing number of experts warning of what he calls a "rush to judgment" in cases of consciousness.

"As many as 40% of individuals who have been diagnosed with vegetative state, actually retain some conscious awareness," he said. "That's a fairly alarming number."

He thought Dylan just might be one of those cases and, given the right therapy, might pull himself out of that fog.

"The adage was, the brain is not a muscle, so you know, just simply exercising it is not going to help it," he said. "Now, there's evidence that if you do rehearsal of a particular behavior, including in a damaged brain, it may well get better."

Dylan was moved to the pediatric unit at Spaulding Rehab, where they started working him hard.

They helped him stand ... tried to get him to walk ... even climb stairs.

"He never said no to any challenge," Steve said. "Physically, anything you asked him to do, any medications, any shots, whatever it was."

It was two years after the accident when Cowan met Dylan for the first time -- not in a nursing home, but back in his OWN home.

The boy who wasn't supposed to be able to walk or talk took Cowan down to his basement to play foosball.

He has confounded the experts -- and he knows it.

Talking was difficult, but he managed to string a few words together. "I feel great," he said.

"And you're making progress every day."

His medical team was pleased, but not satisfied -- not yet, anyway. They kept pushing Dylan to work even harder.

On this day an occupational therapist was helping him make muffins. His movements were slow -- but with help he did it.

"Every day you see something new that's he doing that he wasn't doing before," Tracy said.

Cowan watched as he learned to write again, too, and work on his memory.

"I'm not beating you up too much?" asked his therapist. Through it all, even when it hurt, Dylan was always thumbs-up.

This past summer we decided to check back in on Dylan again ... and guess where we found him? Back at his high school track, where he's a volunteer assistant coach. "I do love it," he said.

We went to the YMCA with him, too, where Dylan does weight training at least once a week.

His father said, "It's amazing to see the amount of weight he can actually lift, because it took weeks and months just to get him to lift his right arm."

But that's not what Dylan is most proud of. When asked where he has made the biggest improvement, he replied, "I can talk much better. Before I would just go, 'Uh, yeah.' And it was just awkward."

"You can have a conversation now?"

"Everything happens a lot quicker in your head."

"Yeah. A little quicker. Slowly but surely, it's getting a little better. I'm good, but I'm not that good!"

"Pretty good to me!"

"Yeah, I know but I'm not that ... I'm very intelligent, but I want to be more intelligent. That's the difference."

He's the first to admit he's got a ways to go. Dylan's mom, Tracy, is careful to keep her expectations in check.

"I want him to be able to take care of himself in the future," she said. "And I know he would love to have a family someday, so that's something I'm hoping will happen for him."

Dylan's not ready for a full-time job. He can't live alone, because cooking remains a challenge -- and he still needs help managing his long list of medications and taking care of his wounds, which are still healing.

Joseph Giacino concedes there are parts of Dylan's brain that will likely never recover. But what Dylan's case suggests, he says, is that for some people, being in a vegetative state may not be as persistent as it was once thought.

"The evidence is that, for somebody with a disorder of consciousness, the condition is not going to be considered permanent until a year," Giacino said. "And now with this most recent data, we know that the small percentage, maybe 15%, will actually recover after one year."

His amazing journey has surprised everyone -- his friends, his family, and his doctors. The only person NOT surprised by it all is Dylan Rizzo himself.

Cowan asked, "You sort of knew that you were going to get better, didn't you?"

Man with autism opened a cafe during the pandemic, and now it's helping others
More