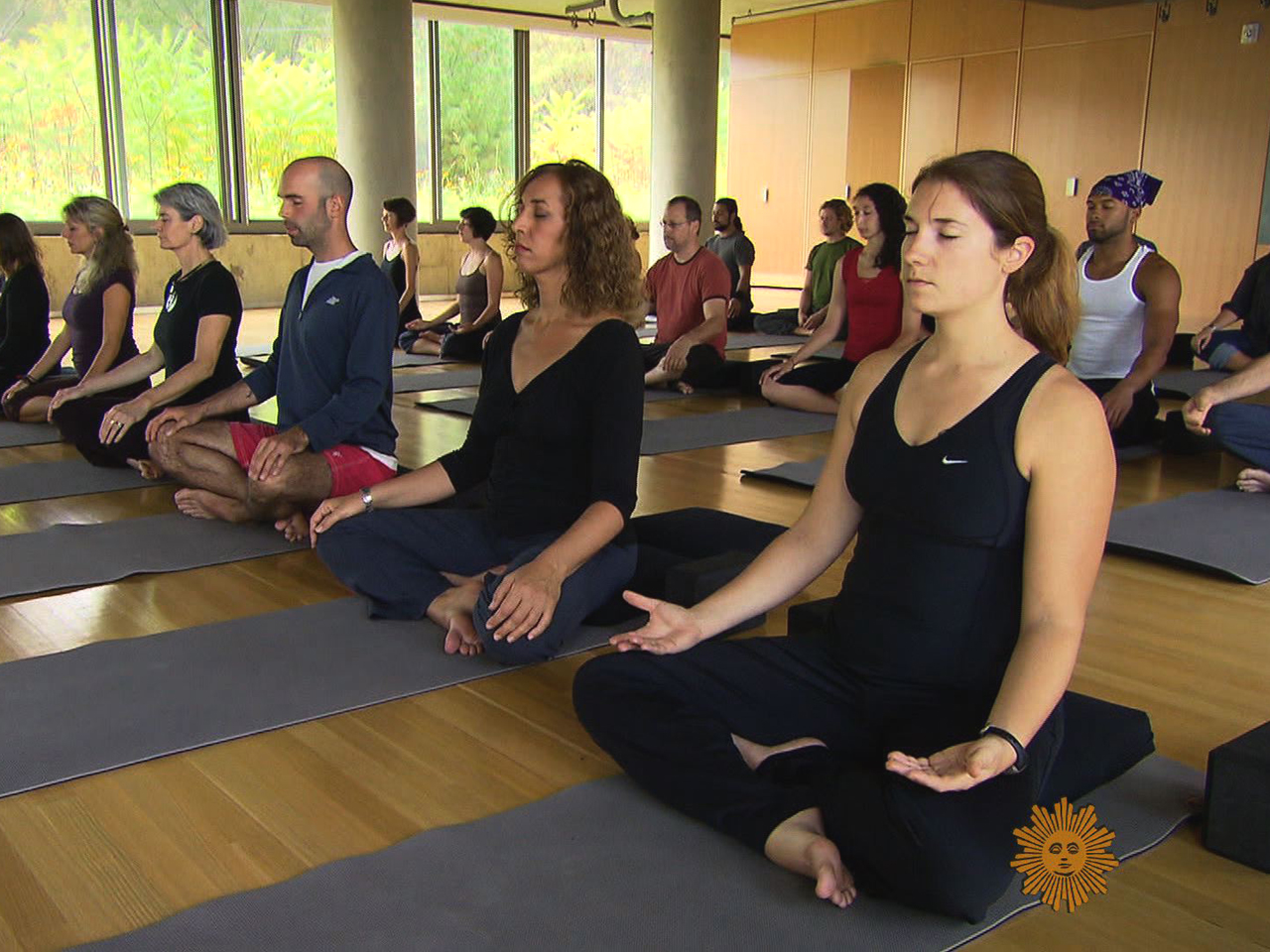 Just five days in, our New Year's resolutions are still relatively fresh, including those that have to do with good health and exercise. And when it comes to exercise, more and more Americans are taking up one that can fairly be described as a real stretch, as Rita Braver reports in our Cover Story:

Yoga: it's practiced by millions of Americans who credit it with bringing them better health, physical fitness, and serenity.

And then there are those who see it differently . . .

Yes, that's Alec Baldwin, the famously un-serene bad boy, who not long ago made headlines, again, when he got into an ugly scuffle with a photographer staking out his family.

When he spoke with Braver, just before that incident, he made no secret of the fact that his main interest in yoga isn't anger management; it's that his wife Hilaria is an instructor.

"When I came to her class the first time and watched her teach her class, all I wanted to do was, like, pour a glass of scotch and light a cigarette and just say, 'This is never happening,'" Baldwin said.

But Baldwin was there -- at least in body -- when his wife taught an unusual class right in the Smithsonian's Sackler Gallery in Washington, amid priceless works of art.

It's the first major exhibit about yoga ever mounted in the U.S.

The Baldwins chaired the opening gala and helped sponsor the show, which Hilaria Baldwin says calls attention to the ancient origins of a practice that began in India some 2,500 years ago.

"By looking at the history, you see how deep the roots are," Hilaria said, "and how important it has been through centuries. Now it kind of brings it full circle."

Curator Debra Diamond, who began working on the exhibition in 2009, said the various depictions of yoga masters, known as yogis and yoginis, show that there was never one set tradition for yoga.

Some forms have links to Hinduism, Buddhism, and other religions.

One fragment of sculpture is from the 2nd century. Its gaunt figures, said Diamond represented renouncers -- "those who gave up society, who began fasting and meditating in order to attain enlightenment and omniscience."

But yoga practice was often completely secular. Kings and maharajas who believed that yoga could help them achieve supernatural powers, like levitation, commissioned a wealth of sculptures, paintings, and manuscripts.

So what does the word "yoga" mean?

"The Sanskrit root of yoga, which is yug, means to hold, to join, to unite," said Diamond. "But the term yoga itself has probably more meanings than any other Sanskrit word. These range from the yolk, the harness of an ox, to the union between opposites."

Americans, including Henry David Thoreau of Walden Pond fame, became interested in yoga as early as the mid-19th century.

Howard Thurston, a famous magician of the late 1800s, traveled the country claiming to have supernatural yoga-style powers, performing illusions like the suspended rope trick.

Diamond said many American first came to know of yogi through the conjuring of exotic stereotypes about India that were rather dubious. "Yogis became an embarrassment for Indians as well as for the rest of the world," said Diamond.

But yoga's image began to change after a 1938 film showing an athletic series of poses and postures to promote physical and mental fitness, developed by a 5-foot, 2-inch yogi named Krishnamacharya.

And today a lot of us are striking poses: A 2012 survey by Yoga Journal found that some 20 million adult Americans say they do yoga, up from 15.8 million in 2008.

But how real are the health benefits?

Dr. Lorenzo Cohen is the director of integrative medicine at M.D. Anderson Cancer Center in Houston, which offers yoga classes for patients and employees alike.

Dr. Cohen says, of the clinical trials that have been conducted, including some at M.D. Anderson,  "We see that yoga can help improve fatigue, help improve sleep dysfunction in cancer survivors, as well as improve physical functioning.

"You're engaging your mind, you're engaging your breath, your lungs," explained Dr. Cohen. "And in some sense, simplistically, a bio-behavioral change is happening within the body. By and large, you're going to be decreasing stress hormones. Heart rate and blood pressure are going to reduce."

And yoga is a booming business! According to one study, Americans spend nearly $6 billion a year on yoga classes and products.

Yoga studios are found in more and more towns. There was even a yoga garden at last April's White House Easter Egg Roll.

And instructors like Hilaria Baldwin can teach even a yoga-phobic reporter (left) a move or two.

She persuaded her husband Alec to appear in her video for pregnant women. [They now have a four-month-old.] And Hillaria says yoga helped her become more relaxed:

"I just stopped taking things so seriously, which was really the key to being much happier," she said.

"Has this rubbed off on you?" Braver asked Alec Baldwin.

"Only where the paparazzi aren't involved," he laughed.

In fact by any stretch of the imagination, yoga takes dedication and discipline, which a lot of us know we should have, but like Alec Baldwin, we may not be able to achieve, despite our best New Year's resolutions.

But never fear: Yoga has always been about the quest, as well as the accomplishment.

How Do You Define Patriotism?