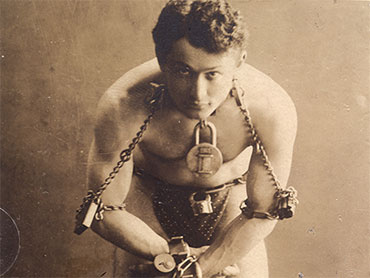 HOUDINI was the stage name of a magician and escape artist who died on Halloween in 1926. It was the one rendezvous with mortality even he couldn't escape. With Martha Teichner we'll now try to unlock his secrets:

Watch an old film of the master escape artist performing and you'll know why we haven't forgotten the name Houdini . . . you can't take your eyes off him, anymore than they could - staring up, mouths open, from a Boston street.

Not before, not since has there ever been a magician like him.

"I think you can see in the film footage of Houdini's escapes and the still photographs, how crowds, tens of thousands of people would amass, right before his performance, so, word spread quickly," said Brook Kamin Rapaport, curator of "Houdini: Art and Magic," at the Jewish Museum in New York City.

"Houdini really predicts and was an originator of our own dizzying and widespread entertainment culture," said Rapaport. "He worked very hard to promote himself."

Think about it: In 1907, over a century ago, Houdini first had himself filmed, handcuffed, jumping off a bridge in Rochester, N.Y. . . . emerging hands free.

He would boast "Nothing on Earth can hold Houdini a prisoner." And over the years, no matter how impossible the tests he devised for himself seemed, nothing did. He always escaped.

It was quite a trick, but perhaps his best trick of all was the invention of Harry Houdini.

"Houdini actually was born in Budapest, Hungary, but he always said that he was born in Appleton, Wisconsin," said his biographer, Kenneth Silverman.

He was born Erich Weiss on March 24, 1874. At the age of four, he moved with his mother and brothers to Appleton, to join his father, Rabbi Mayer Samuel Weiss, who was let go by one synagogue after another, in Appleton, then Milwaukee, and finally New York City.

"They were very poor," said Silverman. "His father worked for a while in a necktie cutting factory, and Houdini, I think, for a while also worked there as a child."

But even then, says Silverman, Houdini was seeking fame and fortune as a performer, doing his first performance as a circus acrobat at about age 14.

"He started off at the bottom rung of show business, which was dime museums: you pay a dime, you go in and see a sword swallower or you see Siamese twins," said Silverman.

By his late teens, he was already calling himself Harry Houdini, the name taken from a famous French magician named Robert Houdin. Playing those dime museums, Houdini met and married singer/dancer Bess Rahner. She became his assistant.

Houdini's first important magic trick was called the Metamorphosis. "Bess Houdini would be put into a sack, and she would go into the trunk," explained Silverman. "A curtain would be closed around it for a moment, bang, the curtains would open, Bess would be standing on top of the trunk. And inside the trunk, the locked trunk, would be Houdini! They would change places, this metamorphosis."

"What interested me about the Metamorphosis trunk," said Rapaport, "is how poignant a symbol it would have been to the immigrant community in this time."

The millions of poor immigrants who arrived with similar trunks, seeking metamorphoses of their own.

"In this period there was anti-immigrant sentiment, anti-Semitic sentiment, and people wanted to become Americans and really slough off their historic past and their roots," said Rapaport. "And by seeing Houdini's own transformation, it was really a great story of liberation from your past."

As he became world famous, Houdini had to up the ante. In 1910, he was the first man to fly a plane in Australia. In the 1920s, he produced and starred in silent films. His exploits became more and more difficult, more and more dangerous . . . especially when he added water.

Possibly his most sensational stunt was breaking out the Chinese water torture cell.

"His escapes were very demanding physically," said Silverman. "He practiced staying underwater, and he would lie in the bathtub and see how long he could stay underwater, with his wife timing him."

Inspired by Houdini, magician David Blaine subjects himself to punishing, even life-threatening feats of endurance.

"I had always heard that he could hold his breath for three minutes and 30 seconds," Blaine said, "And I remember fighting really hard to get to that mark.

"I don't think anybody wants to die, but I think there's a certain rush, or like this heightened sense of awareness that you get when you're pushing yourself in a place where you can only focus on that moment. There's like this moment of clarity, and it's an amazing feeling."

Blaine, if anyone, knows how much of what Houdini did was real and how much was illusion.

For the love of magic, David Blaine will show you how a trick works. But Houdini spent the final years of his life relentlessly exposing the trickery of spirit mediums who claimed they could contact the dead.

"He told the Los Angeles Times in 1924 that it takes a flimflammer to catch a flimflammer," said Rapaport. "And he folded aspects of his anti-spiritualist crusade into his theater performances."

Which is what made his deathbed pact with his wife so strange. He didn't die the way it happened in the old Tony Curtis movie, in his water torture cell, but from a ruptured appendix in a Detroit hospital.

"Houdini died on Halloween in 1926," said Rapaport. "Bess Houdini, his beloved wife, and he had an agreement that for a decade after his death, if in fact there was an ability to reach the other side, that he would communicate with Bess through a secret code."

Every Halloween for ten years, she held a séance. But he didn't come back.

In a way, he never left. He had imitators, but who remembers Torrini? Or Excello?

More than 80 years after Harry Houdini's death, his name is still synonymous with magic.

As he used to say at the end of his shows, "Will wonders never cease?"