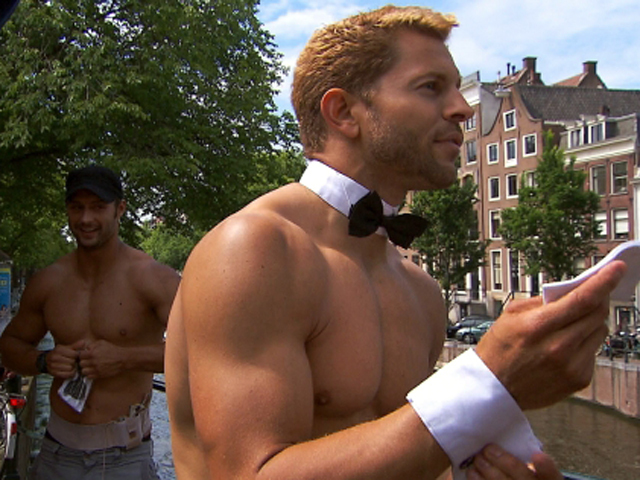 Once again, the ultra-competitive dating divorcees -- who, having won the first leg of this season's race, were eligible to win $2 million instead of $1 million if they crossed the finish line first -- found themselves stuck at an airport for reasons out of their control.

The leg began in Moscow, where teams had to figure out their next destination based on a flag given in their clue.

"France!" most of them exclaimed upon discovering the red, white and blue flag. But it wasn't France. The flag's stripes were horizontal, not vertical, and the country was the Netherlands. Off to Amsterdam!

Teams all made their own travel arrangements, and took different flights. Natalie and Nadiya convinced a ticket agent to sell them an itinerary that had a short, one-hour layover in Rome. This could have ended horribly, but it didn't -- the girls were the first ones to arrive in Amsterdam.

The Chippendales found a direct flight and arrived about an hour after the twins, while Trey and Lexi connected through Larnaca, Cyrpus, and arrived about an hour after that. Abbie and Ryan again found themselves stuck in Frankfurt's airport, after they missed one connecting flight and the next one had mechanical problems. They ended up arriving in Amsterdam at the same time as the last-place Beekman Boys, who connected through Oslo. The four of them were happy to see each other, and again decided to run the race together.

Once in Amsterdam, the twins chose to tackle the Fast Forward, which contained a classic "Amazing Race" challenge - eating a local delicacy in a certain amount of time. The girls had seven minutes to eat five herring each while riding on The Floating Dutchman bus/boat. For the second time this season, the twins were dealing with fish. They finished and headed straight for the Pit Stop, easily finishing first and winning $5,000 each.

Everyone else had to tackle the other parts of the race. First was a Detour: "Back in Time" (recreating Rembrandt's "The Night Watch" with living models) or "Organ Grind" (one team member operating a hand-cranked street organ while the other solicited 30 euro in tips).

James and Jaymes opted for the organ task, but soon realized that they weren't getting many tips and decided this was the perfect time to pull off their shirts and pull out their Chippendales cuffs and collars. Then the money started rolling in.

Once they collected the money, they were sent to Museum Geelvinck to search the gardens for their next clue. It was there that they found the Double U-Turn stand, and had to decide whether they wanted to play nice or play competitive. Earlier, the Twins, Texans and Chippendales had devised a plan -- whoever found the kiosk first would U-Turn Abbie and Ryan, and the next team to arrive would waste the second U-Turn by using it on whichever team had arrived first. James and Jaymes were in at the time, but both hesitated once it was actually time to play the game.

"Why lose a friend if you don't have to?" Jaymes asked. But he thought of his dad, who is suffering from cancer and  could use  the prize money, and went for it. They U-Turned Abbie and Ryan, and then the Texans arrived next and kept with the plan, selecting the Chippendales for the second U-Turn.

Abbie and Ryan and the Beekmans completed the Rembrandt task and moved on to the museum. Abbie and Ryan were shocked when they saw the Chippendales had U-Turned them, and set off to attempt the organ-grinding task (it had started raining by then, meaning there were very few passers-by on the street). Josh wanted to stick with them but Brent quickly shut that idea down - these two aren't going to be winning the "Race," but there was still no reason for them to sacrifice themselves.

They moved on to another familiar "Race" challenge: pole-vaulting across a ditch, grabbing the clue that would lead them to the Pit Stop, and then vaulting back across. No one really seemed to have a difficult time with this one.

As expected, Abbie and Ryan arrived at the Pit Stop last, and were eliminated from the race. That means the only team that could have won $2 million this season is now gone.

Do you think the Beekmans should have stuck with Abbie and Ryan? Were the Chippendales right to use the U-Turn? Tell us your thoughts in the comments.