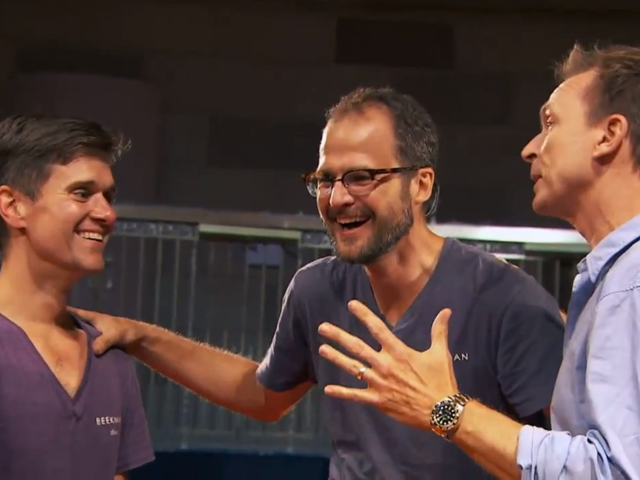 After three continents, nine countries and more than 25,000 miles, it was time for teams to head for the finish line on this season of "The Amazing Race."

But who won the million dollar prize? (Spoiler alert!)

It was Josh and Brent, a.k.a. the Beekman Boys. Yes, you read that right -- the team that hadn't won a single challenge all season and struggled at points just to stay in the race, stayed calm and steady, as the other teams got frazzled, and were able to finish first.

Here's how it happened:

When Sunday's two-hour finale began, Chippendales Jaymes and James, Texans Trey and Lexie, goat farmers Josh and Brent and twins Natalie and Nadiya (who escaped elimination last week but had a Speed Bump awaiting them) were the only teams remaining.

All four teams took the same flight from Mallorca, Spain, to Barcelona, where they switched to a train that took them to France's Loire Valley. The Texans, twins and Chippendales continued with their alliance, which made no sense now that their strongest competition -- Abbie and Ryan -- were out of the race. Their new agenda: Eliminate the Beekman Boys. Natalie and Nadiya, feeling the pressure of being in last place, were particularly keen to see them go, and made comments about the Beekmans "hanging around for no reason," "coasting through" and "hanging on coattails."

Once in France, the teams loaded a couple of crates into their cars and head to a chateau to find a stone dog that contained their next clue. The next destination was Leonardo da Vinci's final resting place, Chateau d'Amboise, but the twins first had to complete their Speed Bump -- lacing a woman into an 18th-century corset. It didn't take them long, but they still lost precious time. And once they were behind the other teams, the alliance unraveled fast.

The Detour required teams to choose between Chow (cutting up and deboning raw meet to feed hunting hounds) or Plow (using a horse and a traditional plow to make rows in a field).

The twins and Beekmans went for the dogs, and engaged in a lot of trash talking while preparing the dog food. The twins accused Josh of faking his ankle injury (to be fair, he didn't seem to have much trouble running around this week) and the Beekmans kept up the banter once they realized it was distracting the girls, who watched in disbelief as "the gays," as they called them, finished first and sped away.

Teams then went to Bourre to La Cave Des Roches, where mushrooms were on the menu for the Road Block. One team member had to descend into the caves, search for three specific kinds of mushrooms and bring back 10 of each. It was dark in the subterranean cavern and many of the mushrooms looked alike. Some team members got uneasy when the lights went out (Can you blame them?).

The Chippendales and Texans finished and made it to the Pit Stop at Château de Chenonceau in first and second place, respectively. The twins finished the mushroom challenge before the Beekmans and it looked as if their place in the finale was secure, but then they ran into navigation issues and Josh and Brent were able to take the third-place spot. The girls came in fourth and were eliminated, looking sober and quiet as they were told they wouldn't be continuing.

Then it was on to the 12th and final leg of the race, and their final destination: New York City! Teams had to travel to Brooklyn's Coney Island boardwalk and search the area for their next clue, which was hard to find because it on a poster that didn't have the traditional "Amazing Race" red and yellow, which is what everyone was looking for.

The Chippendales were the last ones left at the boardwalk once everyone else found the clue and sped off to the Brooklyn Navy Yard. Finally, they saw the poster -- which was right in front of where they were standing -- and followed suit.

"Who's up for an Amazing Escape?" the clue asked. The challenge required a team member to perform an Harry Houdini classic -- escape from a straight jacket while suspended upside-down 15 stories above the ground. Once they got out of the straight jacket, they would be dropped into a surprise bungee free fall.

After that, they were directed to find Lombardi's, NYC's oldest pizza restaurant, and make a few deliveries. Teams had to memorize three addresses and deliver specific orders to each on foot. The Beekmans, being New Yorkers, had an advantage here, but squandered it when they delivered two of the orders incorrectly and had to re-do them. Josh's mistake sent Brent into full-on passive aggressive mode, and they bickered all the way through the do-over.

The next destination was the United Nations headquarters, where they got their final challenge of the season. "Who has a way with words?" the clue asked. Whoever didn't do the Houdini challenge had to take on this one -- correctly identifying the ways to say "hello" and "goodbye" in each of the nine countries they visited on "The Amazing Race," and hoisting the phrases up the flagpole with the corresponding country. Everyone remembered Spain and France immediately, but how were they greeted in Bangladesh? Russia? Turkey? China?

All the teams were there at the same time, and the pressure was on. Lexi's composure unraveled quickly, and Trey couldn't do much besides trying to encourage her to keep going. Josh smartly turned the task from a memory game into a math problem, using deduction to figure out the languages he didn't know. "I love the world!" he exclaimed when he finished.

Once all the correct greetings were hoisted with the correct flags, teams were directed to the Finish Line, located at Gotham Hall. Inside, host Phil Keoghan and all the eliminated teams were waiting as the Beekmans burst in first, winning the $1 million. James and Jaymes came in second, and Trey and Lexi came in third.

"We never, ever thought we would hear you say those words to us," Brent told Keoghan when he declared them the winners.

Josh added, "We were underdogs, and what I hope this proves to people -- whether they're a minority or they're out of work or they're losing their house or whatever -- if they just keep going and keep working as hard as they can, people will help, and at some point you will win."

What did you think of this season of "The Amazing Race"? Did the right team win? Tell us your thoughts in the comments.