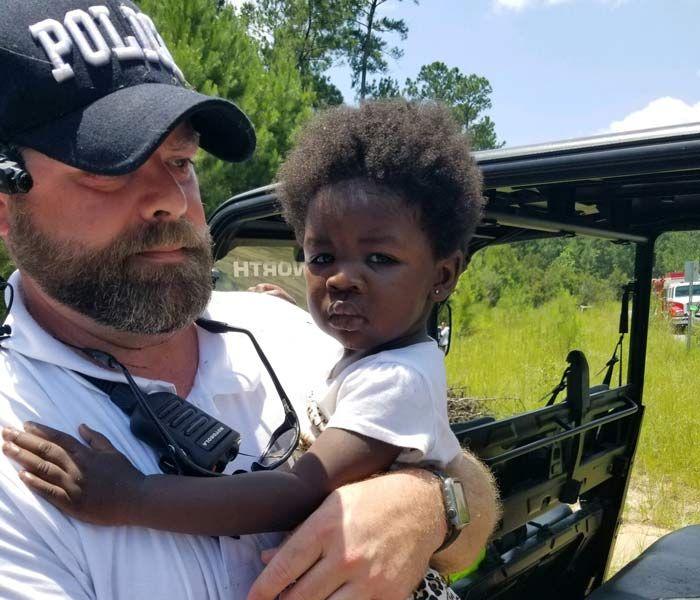 A dramatic rescue in the woods near Savannah, Georgia, was caught on police body camera video on Wednesday. The footage shows a group of officers walking in a wooded area when they begin to hear a toddler crying out in the distance.

"That's a child," one member of the team says. The group begins to pick up their pace and run through the trees towards the crying sound. "Where is she? Where is she?" another voice says. They reach the source, and a member of the crew pulls a 2-year-old girl out of the foliage. It was Kamiyah Vicks, who was reported missing by her mother earlier that day, CBS affiliate WTCO reports.

Kamiyah was last seen near a wooded area close to her home in Port Wentworth. According to Major Lee Sherrod from the Port Wentworth Police Department, her mother was seen pushing the child in a stroller on Tuesday. Then on Wednesday morning at around 7 a.m. she was seen without her daughter. Sherrod said the mother called police about her missing child.

When police arrived, Kamiyah's mother was in distress in what appeared to be a crisis situation. They deployed a search team and discovered the stroller and the mother's flip-flops near a neighborhood pond. Port Wentworth officials called in Marine Control, thinking the child could be in the pond.

A group of volunteers as well as firefighters and police officers from multiple departments began searching the woods near the pond. It was a team of Savannah Police Department recruits that found the 2-year-old crying in the woods at 12:27 p.m. Wednesday.

Cadets Robert Parker, Luis Esquina, and Ernest Mobley say their team searched for about two hours before finding the toddler. The cadets have all graduated from the Police Academy, but this is just the second week of their seven-week training session with Savannah Police Department. They say they're grateful that their training helped save a life.

"It was a relief," Esquina said. "It's a 2-year-old baby, so I thank God every single day that He's able to bless us and help us to get to where we're at, and I thank God He was there on our side today." Someone is heard thanking God in the video, when the group discovers the child.

The mother was hospitalized and was interviewed by investigators from the Port Wentworth Police Department. Kamiyah was also taken to the hospital. She only suffered minor cuts and scrapes, and was in "good spirits," the police department says. Photos show her in the arms of several officers, and she does not appear to be in distress. In fact, in one photo the toddler is happy enough to try on a pair of sunglasses while an officer holds her and others talk with her.