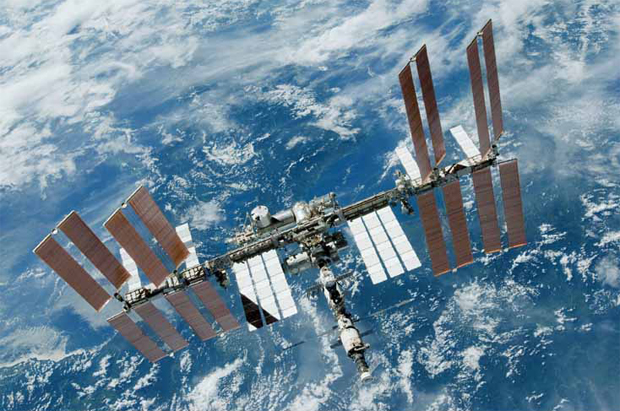 Astronauts gave thanks and previewed their "traditional" space meal in a video greeting from the International Space Station just in time for Thanksgiving.

NASA astronauts Scott Kelly, who is nearing the end of his one-year mission, and Kjell Lindgren took a moment to celebrate the season in a video preview of their Thanksgiving dinner, where they discussed what they're thankful for and grabbed a few quick bites of their zero-gravity feast.

The two NASA astronauts, along with Japanese astronaut Kimiya Yui, will get the day off from their 250-mile-high (400 kilometers) research on Thursday, and will share their Thanksgiving meal with the others aboard the space station: Russian cosmonauts Mikhail Kornienko, Oleg Kononenko and Sergey Volkov. [Space Food Evolution: How Astronaut Chow Has Changed]

"We just wanted to wish you a very warm and happy Thanksgiving," Lindgren said in the video greeting. "We are incredibly thankful for the opportunity to be up here on the International Space Station, working and living in this amazing orbiting laboratory -- a physical manifestation of what is possible when the great countries work together with communication, cooperation and collaboration towards peaceful means to perform research that benefits humanity back on the Earth."

He was also thankful for the "thousands, if not tens of thousands," of people working from the ground to keep the astronauts safe as they work in orbit, as well as for his family, whom he will get to see when he returns to Earth in late December.

Kelly added his own thanks, as well: "Being on the space station here and looking down at our incredibly beautiful planet gives us a different perspective on what it means to be citizens of planet Earth," he said. "Since I've been up here, we've seen so many bad things that often happen down there -- we follow that on the news -- and it just makes us really thankful to live in a country like the United States that provides us with freedom and opportunity."

For their day off Thursday, the astronauts will relax and catch some football in the late afternoon -- traditionally, although the Russian cosmonauts don't share their day off, they'll all gather for the Thanksgiving meal together.

The first Thanksgiving in space was aboard the U.S. Skylab space station in 1973, and the first on the International Space Station was in 2000. NASA spokesman Dan Huot told Space.com that the meal has remained relatively consistent from year to year over the lifetime of the International Space Station -- it just happens that the smoked turkey, candied yams, rehydrated corn and potatoes au gratin have been available for space from the very beginning.

In "The Martian," stranded astronaut Mark Watney survived by planting raw potatoes intended for a crew-wide Thanksgiving feast on the Red Planet. But at least for now, space station astronauts survive only on precooked and pretreated foods. (Although the astronauts tried their first space-grown lettuce this year, the potential zero-gravity staplewill not be incorporated into the festive meal.)

Some astronauts could potentially have extra food sent up as special-request items, Huot said, but he isn't aware of anyone doing so; the astronauts seem to be sticking with the basics.

Kelly and Lindgren demonstrated those basics to conclude the Thanksgiving video, as Kelly tried a bite of candied yams and Lindgren chewed a chunk of newly unwrapped smoked turkey.

"We don't have much of this stuff, so I hope he enjoys that," Kelly quipped as Lindgren tried the turkey -- "because that was his Thanksgiving dinner right there."

Editor's Note: In case you want some space flavor for your meal, here's NASA's recipe for space cornbread dressing.