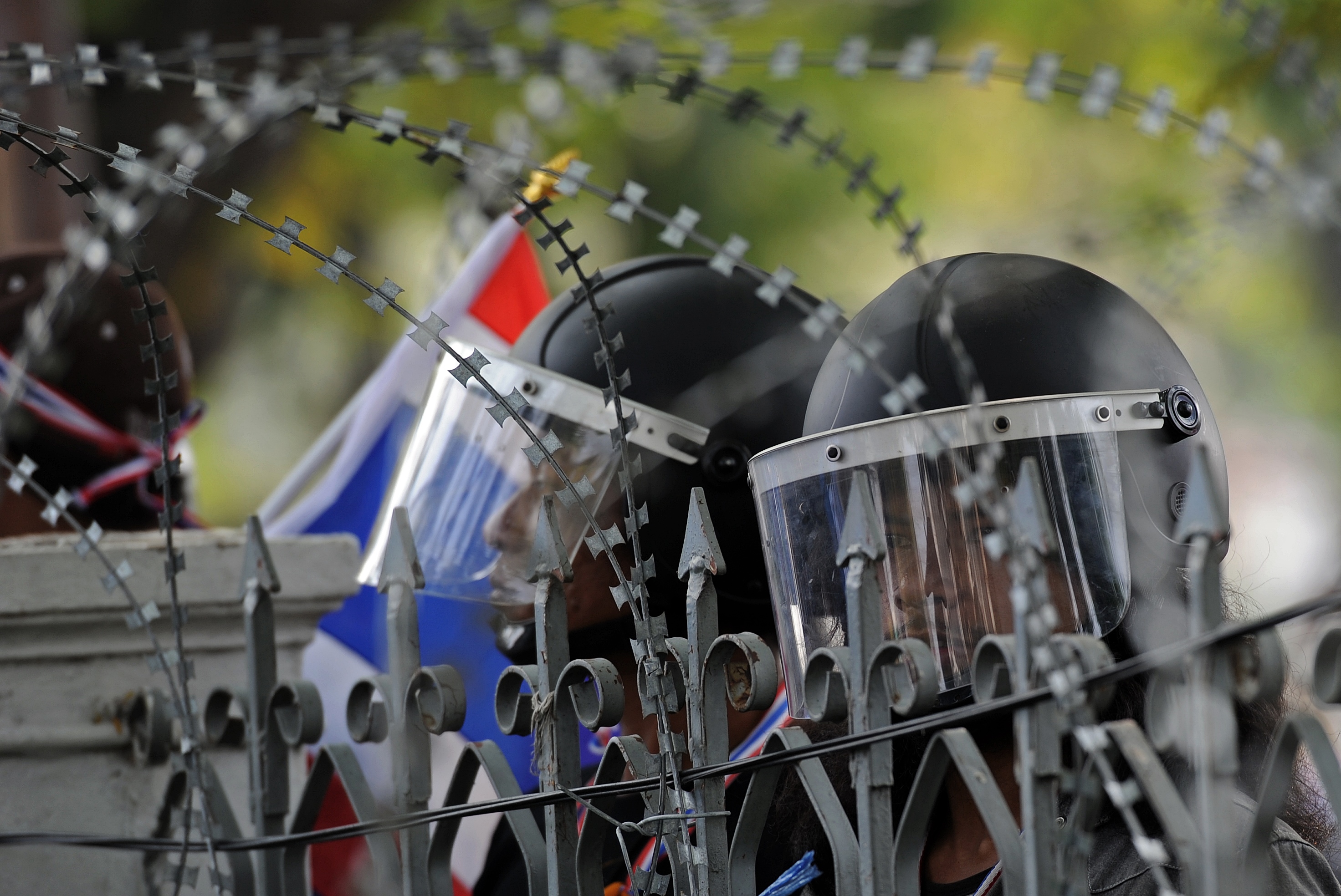 BANGKOK -- Protesters cut off electricity to the prime minister's office compound on Thursday and demanded that police abandon the premises, piling pressure on the government amid a political crisis that has dragged on for weeks.

The protesters, seeking to force the replacement of caretaker Prime Minister Yingluck Shinawatra's government before a Feb. 2 election, have threatened to force their way in if police don't leave. Police attempts to negotiate were rebuffed, but they did not withdraw immediately.

Yingluck was not in her offices at the time and shortly afterward gave a televised address from an unidentified location in which she announced a Dec. 15 meeting of all sections of society to try to find a solution to the crisis.

The protest leadership has demanded a meeting with senior military and police officials, a call which has so far been rejected, at least publicly.

In a previous confrontation, police withdrew from the compound to allow the demonstrators in without a fight. That withdrawal came after two days of increasingly violent standoffs.

Looking for a way out of the crisis, Yingluck dissolved the lower house of Parliament on Monday and called for early elections. Her foes, however, insist she step aside to make way for an interim appointed government, an action that cannot be taken under the country's constitution.

They claim that Thai politics is hopelessly corrupt under the influence of Yingluck's billionaire brother Thaksin Shinawatra, who was ousted in a 2006 military coup after being accused of corruption, abuse of power and disrespect for the country's constitutional monarch.

To carry out reforms, they want to institute a less democratic system where the concept of one-man, one vote would no longer apply because they believe the masses are not well enough educated to choose responsible leaders. They also say the poor sell their votes.

Thaksin's supporters say he is disliked because he has shifted power away from Thailand's traditional ruling class.

Thaksin and his allies have easily won every national election since 2001, relying on the support of the rural majority and urban poor, who benefited from his populist policies. The opposition Democrat Party, which has allied itself with the protests, has not won an election since 1992.

Yingluck's ruling party won the last vote two years ago in a landslide, and is likely to be victorious in any new ballot.

Protest leader Suthep Thaugsuban this week has been declaring that his movement has more legitimacy than the government, which he claims has acted against the constitution.

In a series of bizarre "orders," he has called for police not to report to their posts and demanded that Yingluck be prosecuted for insurrection, a charge that has already been laid against him for his movement's temporary occupation of government offices and call for civil servants to not report for their jobs but instead join the protest movement.

The orders are not taken seriously by anyone outside of the protesters, but are meant to project an image of power among supporters and the public at large.