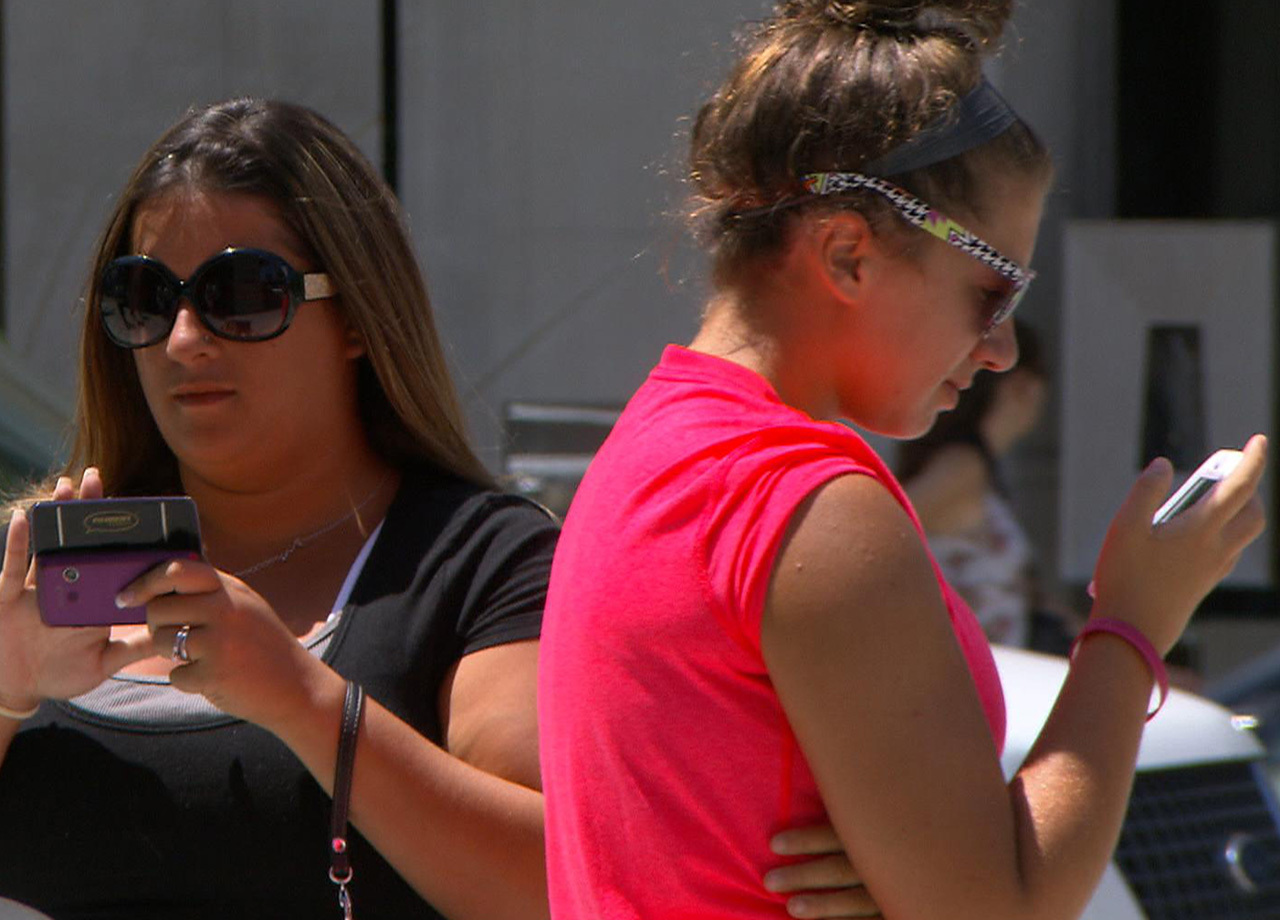 (CBS News) Uhm, sorry, just checking my cell phone . . . a reminder of just how disconnected from our surroundings all these devices can make us. And disconnected is one of the milder things some critics say about our push-button compulsions. Our Cover Story is reported by Susan Spencer of "48 Hours":

Once upon a time, in what seems a far-off land, if you saw someone walking down the street talking to himself, you'd think he was, well, crazy.

Not any more. Ninety percent of American adults own cell phones and, whether talking or texting, it seems that 90 percent of the time, they are using them.

"These days, the minute that people are alone, at a stop sign, at the checkout line in a supermarket, they panic, they reach for a phone," said MIT psychologist Sherry Turkle.

She says high-speed connections have left us more disconnected than ever.

"I studied families who are having breakfast together, and every member of the family is texting," said Turkle. "I study funerals and people around texting.

She pointed to a recent New Yorker cover that captured the phenomenon: A family is at the beach, and each person is on their phone.

Turkle's book, "Alone Together," surveyed hundreds of people about their plugged-in lives. Her conclusion: We have lost the art of conversation.

"An 18-year-old boy talks about how he always would rather text than talk. He says, 'I'll tell you what's wrong with having a conversation - it takes place in real time, and you can't control what you're gonna say.'"

These days, texting is seen as a skill. In New York recently, thumbs were flying as teens competed for the coveted title of "America's Fastest Texter."

"Is it too strong to call this an addiction?" asked Spencer.

"I don't like the word addiction, personally. I think we're vulnerable," Turkle said. "I think we're smitten. We're like young lovers who are afraid too much talking will spoil the romance."

We can't take our eyes off the things, even when we should! Security cameras caught a poor woman walking, with confidence, straight into a fountain.

She just got wet, but another man could have been killed as he nonchalantly strolled off a train platform.

Around the country last year there were more than a thousand emergency room visits for these sorts of injuries.

So where would we all be if suddenly we didn't have any of these precious little devices? If we had to give up all smartphones, BlackBerries and iPads, what would happen? Could we even function?

It turns out, these are not silly questions, as researchers here at the University of Maryland discovered.

Researcher Sergey Golitsynskiy and his colleagues asked students around the world to go without their cell phones for 24 hours. "It ended up being the most horrible experience many of them had ever in their life, according to what they self-reported to us. The psychological impact was significant."

Seventy percent of them quit the experiment, saying they simply couldn't do it.

"They felt a tremendous amount of boredom. They were bored without it," said Golitsynskly. "They felt emotionally detached from the rest of the world."

One American student reported: "I was itching, like a crackhead..." Someone in the U.K. said: "Media is my drug ... I am an addict." A student from China wrote: "I was almost freaking out." And a person from Argentina reported: "Sometimes I felt 'dead.'"

Nicholas Carr, who writes about technology and culture, says, "I think we become obsessive in our desire to keep checking Facebook updates and texts and emails."

Carr believes there's a scientific reason why these devices are our favorite vices: "People have a primitive instinct to want to gather information, to want to know everything that's going on around them. And you can kind of see how that would help you survive back in cavemen and cavewomen days. Where it becomes a problem is when we create this new world for ourselves where there's unlimited amounts of information. We can't stop this compulsive checking."

If we can't stop, think how hard it will be for the generation that's never known anything else, like a toddler - a YouTube sensation - who's so used to the touch screen iPad that a magazine leaves her mystified. How does this work? Why isn't it responding!

"The trend is toward ever more connection, ever more distraction," said Carr.

He thinks all this distraction is messing up our brains: "It begins to crowd out all the quieter, calmer moments, when you might engage in reflection or introspection or contemplation."

But decades ago, people were saying that television would rot our brains! Carr insists there's a difference:

"It was isolated into certain periods of our days," he said. "You'd come home from work and you'd watch some TV, or you'd watch some TV on the weekend. Some people, the first thing they do when they wake up, check their e-mail. Last thing they do before they go to bed, take another glance. And so this is the first time we've had a technology that is kind of imposing itself on us throughout the entire course of a day."

So would it be smart to throw away our smartphones? UCLA neuroscientist Gary Small thinks not. He's used the latest imaging techniques to see what happens in the brain when people surf the web. He says "your brain on a book" and "your brain on Google" are very different brains.

Dr. Small doesn't deny that these devices sometimes distract, but he says brain scans show they also can help sharpen our minds.

"We took a group of older people, and many of these people had never searched online before. And we just had them search online for an hour a day for a week. And we saw significant increases in brain activity, especially in the frontal lobe - the thinking brain."

Dr. Small admits he is "hooked" on his smartphone. Nick Carr got rid of his, thinking it was intruding on his life too much.

But everyone else we interviewed admitted to owning a smartphone.

"I love my smartphone," laughed Turkle. But she added, "I'm not worried about being fixated."

Turkle's advice on how to avoid fixation? Occasionally put the thing down, look another human being in the eye - and open up your mouth.

Kenny Loggins on savoring the moments
Thanks for reading CBS NEWS.
Create your free account or log in
for more features.
View CBS News In
CBS News App Open
Chrome Safari Continue
Be the first to know
Get browser notifications for breaking news, live events, and exclusive reporting.