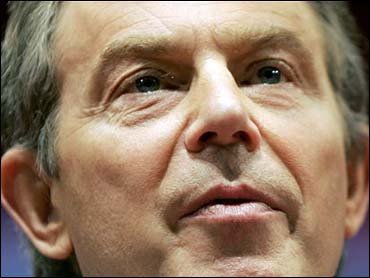 Text of Prime Minister Tony Blair's statement Thursday morning on the train and bus attacks in Britain, as delivered at the G-8 summit in Gleneagles, Scotland:

I'm just going to make a short statement to you on the terrible events that have happened in London earlier today. And I hope you understand that at the present time we're still trying to establish what has happened. There's a limit to what information I can give you. And I'll simply try and tell you the information as best I can at the moment.

It's reasonably clear there have been a series of terrorist attacks in London. There are, obviously, casualties, both people that have died and people seriously injured. And our thoughts and prayers, of course, are with the victims and their families.

It's my intention to leave the G-8 within the next couple of hours and go down to London and get a report face to face with the police and the emergency services and the ministers that have been dealing with this, and then to return later this evening.

Each of the countries around that table has some experience of the effects of terrorism. And all the leaders, as they will indicate a little bit later, share our complete resolution to defeat this terrorism.

It's particularly barbaric that this has happened on a day when people are meeting to try to help the problems of poverty in Africa and the long-term problems of climate change in the environment.

There will be time to talk later about this.

It's important, however, that those engaged in terrorism realize that our determination to defend our values and our way of life is greater than their determination to cause death and destruction to innocent people in a desire to impose extremism on the world.

Whatever they do, it is our determination that they will never succeed in destroying what we hold dear in this country and in other civilized nations throughout the world.