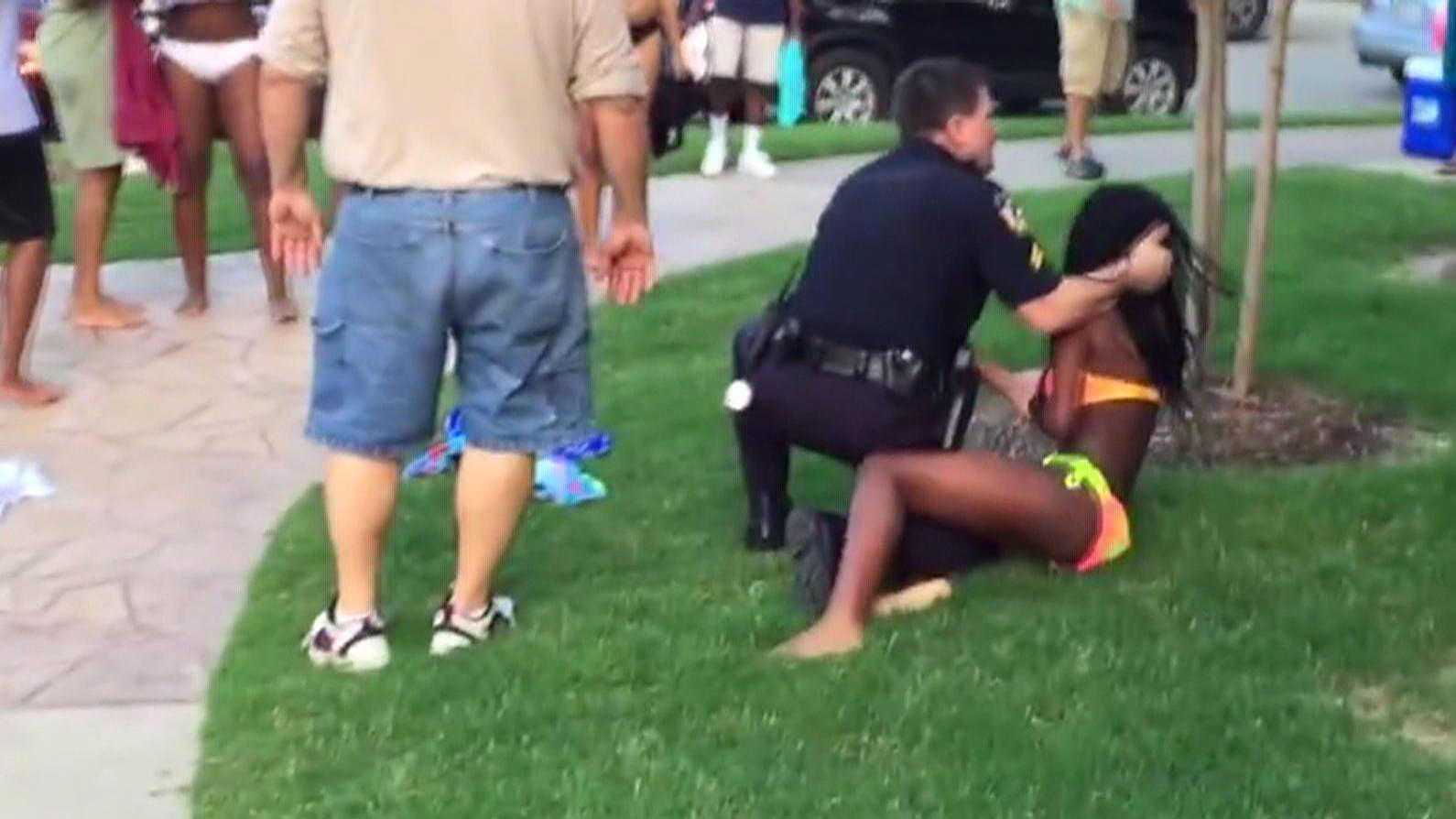 McKINNEY, Texas - A Texas police officer has resigned, days after cell phone video of him violently restraining a young girl and drawing his weapon on unarmed teens at a pool party went viral.

"The actions of Casebolt, as seen on the video of the disturbance at the community pool, are indefensible," Conley said. "Our polices, our training and our practices do not support his actions. He came into the call out of control and -- as the video shows -- was out of control during the incident. I had 12 officers on the scene and 11 of them performed according to their training. They did an excellent job."

The video -- which showed Casebolt putting one black teen in handcuffs, pointing his gun at others and throwing a young black girl to the ground -- sparked worldwide outrage. Monday night, hundreds of demonstrators gathered outside the pool where the incident took place, many calling for Casebolt to be fired.

The dispute is the latest in a string of high-profile incidents involving white police officers use of questionable force against black people. On Tuesday, White House spokesman Josh Earnest said President Obama was monitoring coverage of the incident.

Saying he feared for his safety, Casebolt gave a statement to investigators and left town after being placed on administrative leave Monday, according to CBS Dallas.

Neighbors said a woman who lives in the community reserved the pool for an event, according to Benét Embry, a black local radio personality who witnessed the incident. The homeowners' association limits the number of guests each homeowner may have at the pool to two. But about 130 people, mostly kids, showed up.

At one point, several kids began jumping over the fence to get into the pool area and were causing a disturbance, Embry said, and a couple of fights broke out.

"This was a teenage party that got out of hand," Embry said.

Although most of those detained were male and minorities, the fight that prompted calls to the police was between two adult white women and the 19-year-old black woman who hosted the party. Police said some of the young people did not live in the area and did not have permission to be at the pool.

"I do not condone the actions of those individuals who violated the rules of the community, showed disrespect to the security person on scene, and to the officers who responded," Conley told reporters Tuesday. "However, we as a department are held to a high standard of action as we do our jobs."

According to Conley, charges of interference with the duties of a police officer and evading arrest have been dropped for the lone man who was arrested. All others who were initially detained were later released without being charged.

A girl who recorded video of the incident said police were only targeting minorities, reports CBS Dallas. "I honestly believe it was about race because mostly they did nothing to the Caucasians," 13-year-old Jahda Bakari said. "They were trying to make us leave, but if we ran, they'd chase after us, and if we stayed, then they'd arrest us."

Brandon Brooks, another teen who recorded video of the incident, told television station KDFW that tensions rose after a white woman and a black teenager had an altercation. He said the white woman told the teen "to go back to Section 8 housing," a reference to federal housing aid given to low-income families.

The comment holds extra significance in McKinney, which has been the target of lawsuits accusing its housing authority of racially segregating Section 8 housing. One long-running lawsuit was settled with a consent decree in 2012 that aimed to open up the west side to subsidized housing.

Brooks said the officer was "out of line" and that he felt compelled to keep filming when Casebolt pulled out his gun.

"At that point, my heart did drop and I was scared that someone was going to get shot and possibly killed," he said.

CBS Dallas reported that since Casebolt resigned voluntarily , it would be difficult for the City of McKinney to discipline him. The Texas Commission on Law Enforcement (TCOLE) will only enter "marks" in Casebolt's file if he is disciplined or fired from a department, meaning he can still work as a commissioned police officer.

Several people have filed complaints against Casebolt that could result in criminal charges. If so, his TCOLE status and his ability to be hired by another law enforcement agency would be affected. Conley said it was likely that Casebolt will receive his pension.

State records reviewed by CBS Dallas show the 41-year-old Casebolt, who has been with the department for since 2005, had 2,200 hours of law enforcement classes, including extensive training in both cultural diversity and use of force.

Complaints against Casebolt were still being reviewed, according to Conley, who said the investigation is continuing.