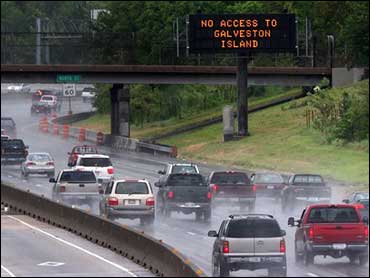 Texans' fondness for large, manly vehicles has helped make the Lone Star State the biggest carbon polluter in the nation.

The headquarters state of America's oil industry spewed 670 million metric tons of carbon dioxide into the atmosphere in 2003, enough that Texas would rank seventh in the world if it were its own country, according to the most recent figures from the U.S. Energy Information Administration. The amount is more than that of California and Pennsylvania - the second- and third-ranking states - combined.

A multitude of factors contribute to the carbon output, among them: Texas' 19 coal-burning power plants; a heavy concentration of refineries and chemical plants; a lack of mass transit; and a penchant among ranchers and urban cowboys alike for brawny, gas-guzzling trucks - sometimes to haul things, but often just to look Texas tough.

Debbie Howden, an Austin real estate agent, said her family of six has two pickup trucks, three SUVs, and no apologies. "I would definitely put size and safety over the emissions thing," said Howden, 55. She calls their high fuel bills a "necessary evil."

Anthony Nguyen attended the famously liberal University of California at Berkeley but drives a black Nissan Frontier pickup handed down from his dad, a liquor store owner near Houston. Nguyen said his father hauled liquor around in the truck, but he admitted he has no practical use for its large bed.

"I think it's the idea that in Texas, everything is bigger," said Nguyen, 20. "I grew up here, and I think it's pretty cool."

While states such as like California and New York are moving quickly to address global warming, the issue has prompted only scattered calls for reforms here. GOP leaders in Texas have refused to make emissions reduction a priority, and Republican Gov. Rick Perry has expressed doubt as to whether global warming is even a manmade problem.

Texas political leaders read "environmental protection as government activism" and want no part of it, said Jim Henson, director of the Texas Politics Project at the University of Texas at Austin.

With all the don't-mess-with-Texas swagger he can muster, Perry has called Al Gore's mouth the leading source of carbon dioxide. As for the state's greenhouse gas ranking, Perry's administration makes no apologies.

"Being that Texas is a heavily populated state, that it is the leading producer of energy, has the largest refining capacity and has the largest petrochemical industry in the nation, it would be expected that we would have the largest total of greenhouse gases in the country," Perry spokeswoman Allison Castle said.

Transportation accounted for 28 percent of Texas' carbon emissions in 2003.

There is little doubt the state's stand on pollution reflects the influence of Texas' biggest and most powerful industry: energy.

"Decisions are not just made by politicians because of a lack of foresight, but in many cases, they have big contributors encouraging them to move in that direction," said Luke Metzger, director of Environment Texas.

Texans polled last spring listed the Iraq war and immigration as the nation's most pressing issues, with fewer than 4 percent saying the environment was a top concern. Nationally, slightly less than half of Americans polled by the Pew Research Center last year rated global warming as a "very serious" problem. Of those, 55 percent say it requires immediate government action.

Kirk Pingel, 28, said his Chevy Trailblazer gets about 18 miles per gallon on the highway, but high gas prices don't deter him: "I'd rather have the luxury of the car I want instead of a car that gets good gas mileage but maybe I didn't want that car."

Pingel coaches youth football and basketball teams and said the extra space in his SUV is useful for transporting sports equipment. His theory on why Texans love their trucks and SUVs? "The larger the car, the bigger you feel," he said.

There is some evidence that attitudes are changing, but only modestly.

"As more hybrids are added on, particularly hybrids that are trucks, you see a spike in those," said Kim Sue Lia Perkes, a spokeswoman for the Texas Department of Transportation title and registration division. "You might not get Texans out of their trucks, but they will buy their hybrid trucks."

The governor touts the state's leadership on renewable energy, like wind. But environmentalists were outraged early last year when Perry signed an executive order to speed construction of 11 new coal-fired power plants. Plans for most of those plants were eventually scrapped after TXU - the state's biggest utility and the source of $400,000 in contributions to Perry's political campaigns - was sold to a private equity firm.

Last fall, the mayors of the state's seven largest cities kicked off a campaign to encourage Texans to replace incandescent light bulbs with efficient compact fluorescents.

"Texans have long had their heads in the sand and now the sand is getting so hot that they're starting to pull it out and look around at what other states are doing," said Tom "Smitty" Smith, director of Public Citizen's Texas office.

One of the House's most conservative members recently declared there's no sense in debating global warming and created a House Carbon Caucus to address carbon emissions.

"It's not about whether global warming is a fact. I don't think we ever get anywhere with that," said Republican state Rep. Warren Chisum, a rancher from the Texas Panhandle and chairman of the House budget-writing committee. He said about 56 Republican and Democratic House members out of 150 have joined the Carbon Caucus.

But she hopes to buy a more efficient vehicle next time around, and when she can, she walks to the post office and the drugstore instead of driving.

"It's time to quit letting the oil lobbies run things," she said. "We need alternative energy. We're really interested in seeing that."