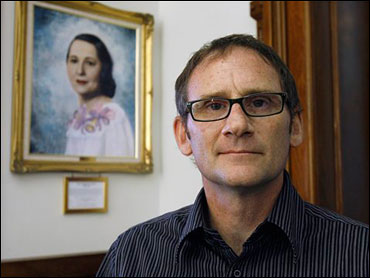 Politics can be plenty spooky, especially this time of year. But in Texas, some politicians have a way of sticking around way past Election Day.

Some say Sam Houston, the Texas hero who famously gave up his job as governor rather than join the Confederacy, still roams his old home here, pacing nervously. Others have seen the ghost of Lyndon Johnson watching election night returns in the mezzanine of the storied Driskill Hotel in Austin.

"That is one haunted city," said Fiona Broome, a psychic, ghost hunter and author who wrote "The Ghosts of Austin, Texas."

The state Capitol is a particular hot spot, she said.

"The Capitol is haunted day and night," she said. "If you've got a nice, misty day there, people see ghosts walking up the path to the Capitol building all the time."

Broome, who spent time in Austin over five years doing research for the book, said she saw many ghosts at the Capitol, including one possibly of Comptroller Robert Marshall Love walking up the promenade toward the building.

Love, who was shot and killed by a disgruntled associate in his first-floor office in 1903, has allegedly startled both tourists and state troopers in his outdated business suit. He was wearing a top hat when Broome saw him.

Across the street, the fire-blackened Governor's Mansion is known for its Sam Houston sightings. But in the turbulent years of the Civil War, the tortured wails and moans from a room where a lovesick teenager took his own life were so disturbing that Texas Gov. Andrew Hamilton locked it up and banned anyone from entering the room, according to the book "Ghost Stories of Texas" by Jo-Anne Christensen.

The fire that destroyed much of the historic landmark last summer likely didn't deter the home's spirits, Broome said. "They'll stay there and they'll be back when it's rebuilt," Broome said.

A few blocks from the Capitol, the legendary Driskill Hotel has a few apparitions of its own.

In the hotel and bar, where it's often said more state business takes place than any official site in Austin, both George W. Bush and Johnson have hosted election night parties and top-secret strategy sessions. And Johnson's ghost is still routinely seen at the hotel.

"He is spotted sitting in a chair right around where they used to set up the TV, where politicians used to come in and watch election results," Broome said.

With the Nov. 4 election shaping up to be a tense one, "I would definitely be looking for him there" on Election Night, she said. "I would be more surprised if people didn't see him there."

Inside the Capitol's imposing pink dome, the third floor has been a particular hot spot. According to the legend, a "lady in red" seemingly hasn't been able to leave the office once occupied by her lover or their secret stairwell, located in an office suite that was held by former House Speaker Pete Laney.

On foggy mornings, in the Capitol's east wing, mysterious handprints appear in the condensation of a Senate reception room window despite repeated cleanings. The window once occupied the bedroom where a 23-year-old stayed before he died in a 1983 fire that destroyed the apartment.

Just outside the reception room is where Senate cook and waiter Tim Mateer said he saw a lady turn a corner late one night behind the Senate chamber when he thought he was alone. He looked around the corner to see who it could have been, but the small cubby was empty.

Not too long after that, Mateer was walking through the Senate press conference room when he was startled by a portrait. It was the woman he'd seen in the hallway - former Texas first lady Fay Wright Stevenson, who died of cancer in 1942.

Mateer says she's a friendly guest and he's happy to share his space with Stevenson, who once played hostess for Senate functions when her husband, Coke Stevenson, was lieutenant governor.

"If Austin had not been the capital city, I'm not sure it would have been as haunted as it is," Broome said. "But because it is the capital city, it's just attracted these tremendously colorful, wonderful characters. These are not just ho-hum ghosts."

Former state historian Bill Green said he never had a run-in with Capitol ghosts during his 1986-89 term with the state, though he heard of many.

"People tend to be skittish at night and their imagination probably works on them," he said. "I'm not particularly one of them, although I do believe in ghosts. I live in a haunted house, but that's another story."