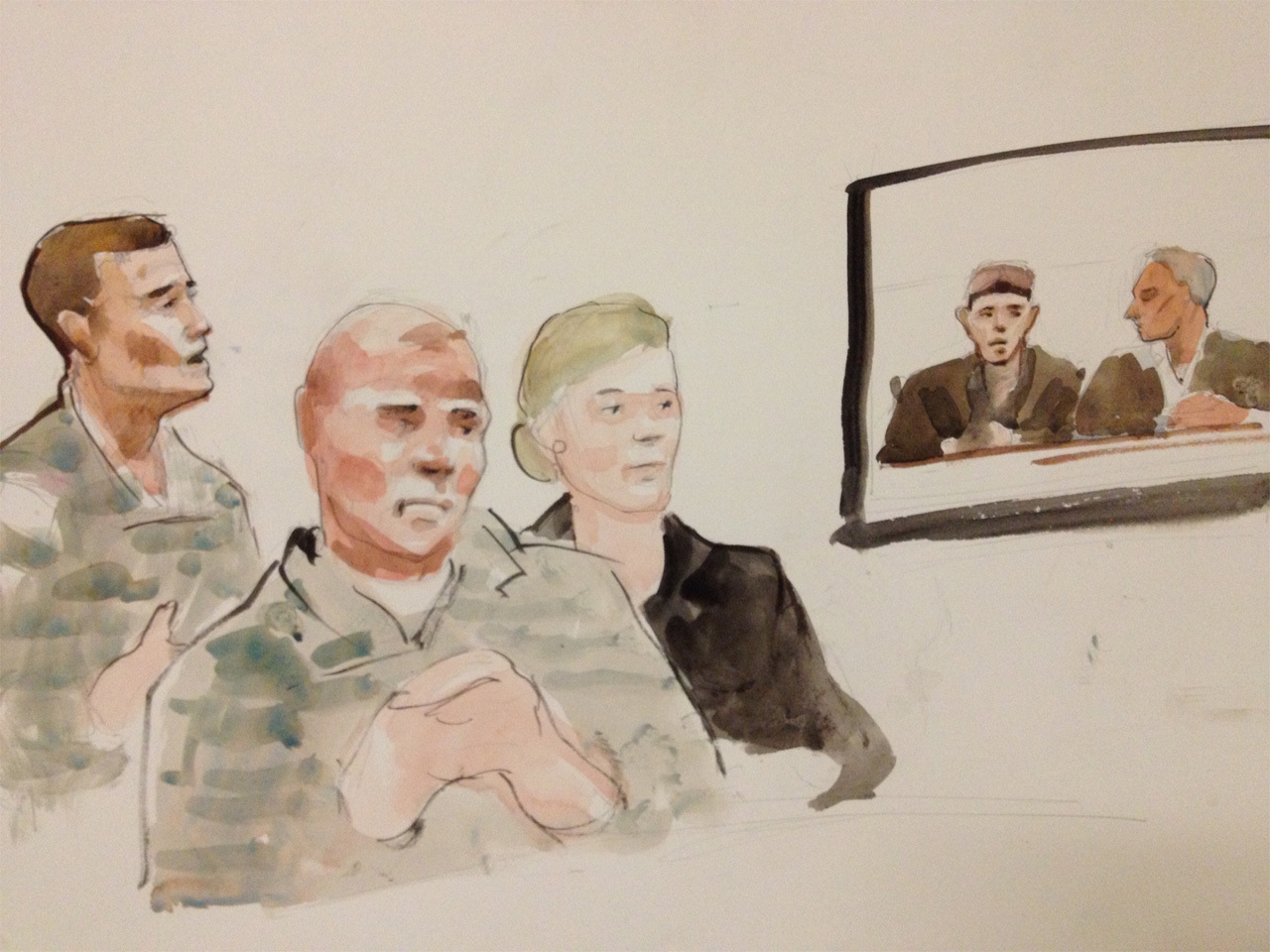 JOINT BASE LEWIS-McCHORD, Wash. Testimony has concluded in a preliminary hearing for an American soldier charged with killing 16 Afghan civilians.

Staff Sgt. Robert Bales kept a calm face as child after child testified by video link from Afghanistan about the bloodbath that left their parents and other loved ones dead.

After the hearing at Joint Base Lewis-McChord, Wash., the investigating officer will decide whether to court-martial Bales, who could be sentenced to death if he's convicted. The hearing began Nov. 5 and is scheduled to end with closing arguments Tuesday.

Through a video monitor in a military courtroom near Seattle, Bales saw young Afghan girls smile beneath bright head coverings before they described the acts he's accused of committing.

He saw boys fidget as they remembered how they hid behind curtains when a gunman killed the civilians in their village and one other.

And he saw dignified, thick-bearded men who spoke of unspeakable carnage: the piled, burned bodies of children and parents alike.

From the other side of that video link, in Afghanistan, another man saw something else: signs that justice will be done.

"I saw the person who killed my brother sitting there, head down with guilt," Haji Mullah Baraan said Monday in an interview with The Associated Press. "He didn't look up toward the camera."

Baraan was one of many Afghan witnesses who testified in Bales' case via the video link over the weekend.

"We got great hope from this and we are sure that we will get justice," Baraan said.

Prosecutors say Bales, 39, slipped away from his remote base at Camp Belambay to attack two villages early on March 11, and that nine children were among the dead.

The slayings drew such angry protests that the U.S. temporarily halted combat operations in Afghanistan, and it was three weeks before American investigators could reach the crime scenes.

Several soldiers testified that Bales returned to the base alone just before dawn the morning of the attacks, covered in blood, and that he made incriminating statements such as, "I thought I was doing the right thing."

Prosecutors say he also made a mid-massacre confession, returning to the base to wake another soldier and report his activities before heading out to the other village. The soldier testified that he didn't believe Bales and went back to sleep.

The Army held nighttime sessions of the hearing on Friday, Saturday and Sunday for the convenience of the Afghan witnesses.

Witnesses were as young as Robina, just 7, who wore a deep-red head covering and a nervous smile as she described how she hid behind her father when a gunman came to their village that night.

The stranger fired, she said, and her father died, cursing in pain and anger.

One of the bullets struck her in the leg, but she didn't realize it right away.

Robina's friend, Zardana, 8, sipped from a pink juice box before she testified. She suffered a gunshot wound to the top of her head, but after two months at a military hospital in Afghanistan and three more at a Navy hospital in San Diego, she can walk and talk again.

Zardana's brother, Quadratullah, recalled that he and others scrambled when the gunman attacked, yelling "We are children! We are children!" The man fired anyway.

Afghan witnesses recounted the villagers who lived in the attacked compounds and listed the names of those killed. The bodies were buried quickly under Islamic custom, and no forensic evidence was available to prove the number of victims.

None of the Afghan witnesses was able to identify Bales as the shooter, but other evidence, including tests of the blood on his clothes, implicated him, according to testimony from a DNA expert.

Bales sat quietly throughout, betraying no reaction to what he heard. Sometimes he watched testimony on a large monitor in the courtroom, and other times he lowered his head and watched on a laptop computer in front of him.

Bales, 39, an Ohio native and father of two from Lake Tapps, Washington, has not entered a plea. His attorneys have not discussed the evidence, but say he has post-traumatic stress disorder and suffered a concussive head injury while serving in Iraq.

During cross-examination of several witnesses, Bales' attorney, John Henry Browne, sought to elicit testimony about whether there might have been more than one shooter.

"There's no way it was one person," Maj. Khudai Dad, chief of criminal techniques with the Afghan Uniform Police, opined Sunday night.

But Dad offered no evidence to support his speculation, and the vast majority of other testimony pointed to there being a single gunman. A video taken from a surveillance blimp also captured a sole figure returning to the base.

It wasn't immediately clear how soon any court-martial might be held.

But if and when it is, military prosecutors say, the Afghan witnesses won't have to testify through a screen any more. It will be face-to-face.