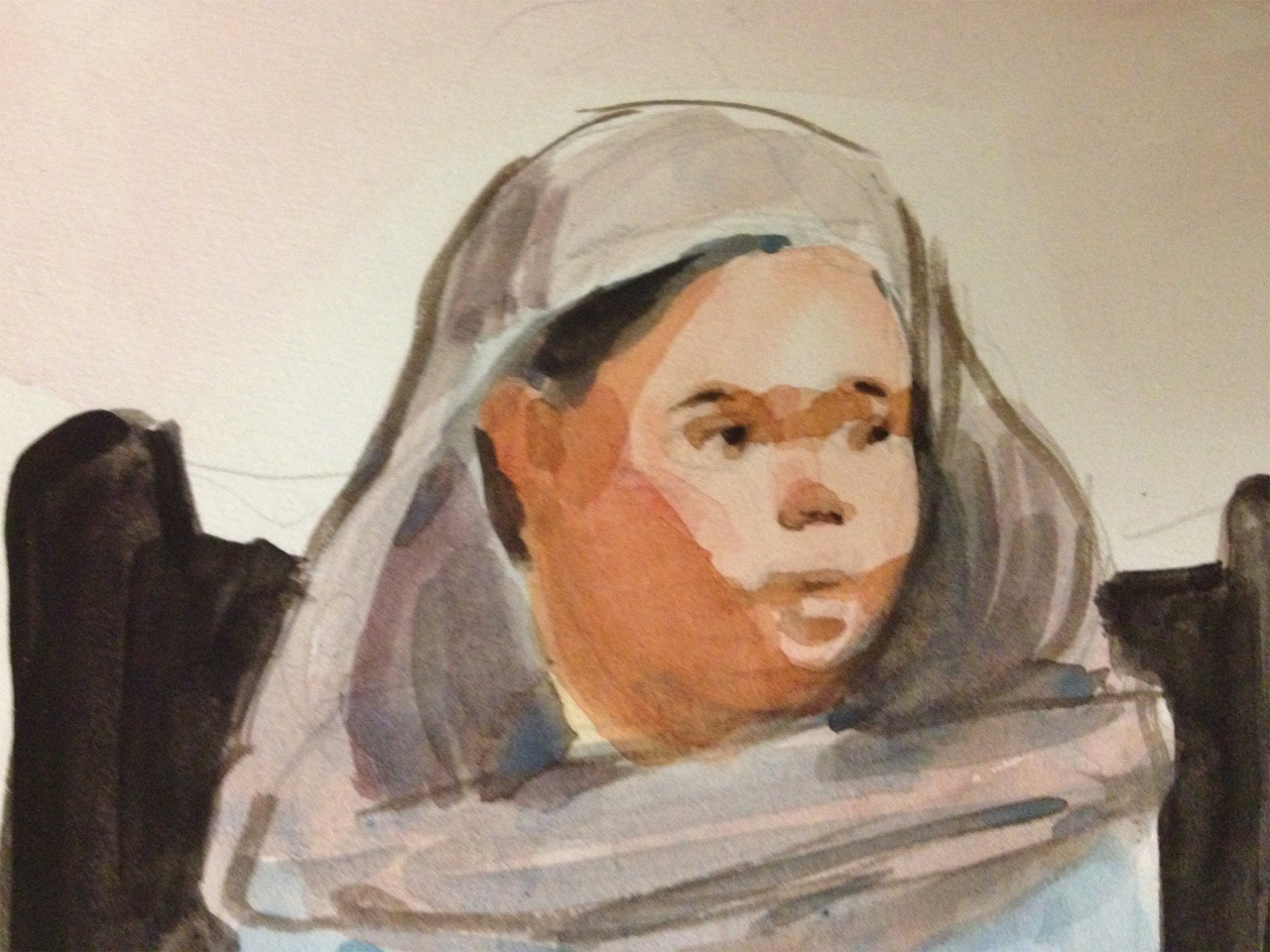 JOINT BASE LEWIS-McCHORD, Wash. Little Robina took her seat wearing a deep-red head covering and a nervous smile, ready to tell her story. She giggled as any 7-year-old in the spotlight might.

But when the questions began, what she recalled seemed impossibly dark: how she hid behind her father when the gunman came to their village that night, how the stranger fired, and how her father died, cursing in pain and anger.

"I was standing behind my father," she testified simply, by video feed from Afghanistan Saturday night during a hearing for the soldier accused of killing 16 civilians, including nine children, in Kandahar Province. "He shot my father."

One of the bullets struck her in the leg, but she didn't realize it right away, she said.

Her testimony came on the second overnight session of the preliminary hearing for Staff Sgt. Robert Bales, who prosecutors say slipped away from his base to attack two villages. The slayings drew such angry protests that the U.S. temporarily halted combat operations in Afghanistan, and it was three weeks before American investigators could reach the crime scenes.

The stories recounted by the villagers have been harrowing. They described torched bodies, a son finding his wounded father, and boys cowering behind a curtain while others screamed "We are children! We are children!"

Bales sat quietly throughout, betraying no reaction to what he heard.

Robina's friend, Zardana, now 8, also testified, but only briefly to describe what the shooter was wearing.

Zardana suffered a gunshot wound to the top of her head, and when she arrived at a nearby military base, the doctors focused on treating the other injured victims first. They figured Zardana had no chance of surviving.

After two months at a military hospital in Afghanistan and three more at a Navy hospital in San Diego, she can walk and talk again.

Before she testified, Zardana sat at the witness table sipping from a pink juice box through a pink straw. A loose head covering and a barrette held her dark brown hair out of her face.

The hearing at Joint Base Lewis-McChord is meant to help determine whether Bales, 39, will face a court-martial in the deaths. He could face the death penalty if he is convicted.

The Ohio native and father of two from Lake Tapps, Wash., has not entered a plea and was not expected to testify. His attorneys have not discussed the evidence, but say he has post-traumatic stress disorder and suffered a concussive head injury while serving in Iraq.

The Afghan witnesses recounted the villagers who lived in the attacked compounds and listed the names of those killed, to provide a record of the lives lost. The bodies were buried quickly under Islamic custom, and no forensic evidence was available to prove the number of victims.

Sadiquallah, a slight boy of about 13 or 14 whose head rose just above his chair at the witness table, described being awakened by a neighbor screaming that an American had "killed our men."

He said he and another boy, Zardana's brother, ran to hide in a storage room and ducked behind a curtain. It provided no protection from the bullet that grazed his head and fractured his skull. Sadiquallah said the shooter had a gun and a light, but he could not identify the man.

The other child was hit in the thigh and also survived. That boy, Rafiullah, testified Saturday that an American had attacked them and put a gun in his sister's mouth.

His father, Samiullah, was away when the shootings occurred, and testified that by the time he returned the next morning, his two wounded children had been driven to a base for treatment. He found his mother among the four corpses at the compound.

Prosecutors said that in between his attacks, Bales woke a fellow soldier, reported what he'd done and said he was headed out to kill more. The soldier testified that he didn't believe what Bales said, and went back to sleep.

During cross-examination of several witnesses Saturday, Bales' attorney, John Henry Browne, sought to elicit testimony about whether there might have been more than one shooter.

One Army Criminal Investigations Command special agent testified that several months after the massacre, she took a statement from one woman whose husband was killed. The woman reported that there were two soldiers in her room — one took her husband out of the room and shot him, and the other held her back when she tried to follow.

But other eyewitnesses reported that there was just one shooter, and several soldiers have testified that Bales returned to his base at Camp Belambay, just before dawn, alone and covered in blood.

A video taken from a surveillance blimp also captured a sole figure returning to the base.