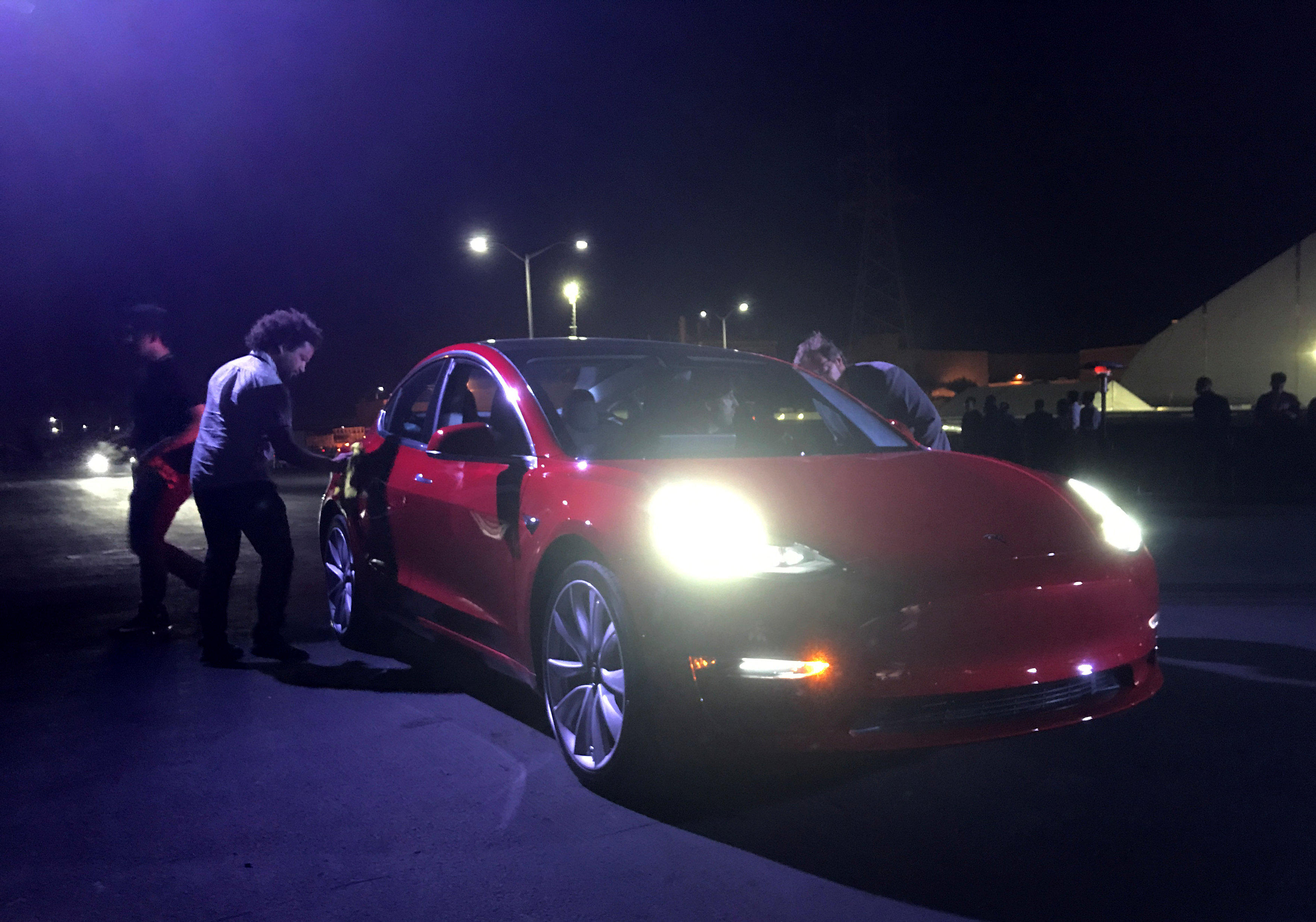 It's been a long time coming for Tesla fans who've been counting the days since Tesla opened up pre-orders for the Model 3 in early 2016, but the wait is over. Tesla has delivered the first Model 3 sedans to consumers and production is now rapidly accelerating towards full-swing. That's good news for those who pre-ordered their cars early, but the good news for everyone is that we finally have the answers we've all been waiting for -- and some impressions from behind the wheel, too.

Tesla's Model 3 will start at $35,000. That's before federal or state incentives, which could subtract thousands more from the price of the car. Its formal range is 220 miles, but those wanting more can step up to the Long Range edition. That adds $9,000 to the price and 90 miles to the tank, meaning you're starting at $44,000 if you want to go 310 miles on a charge.

Elon Musk had originally said there would be few configurations of the Model 3 available initially, and indeed there are, with only the Long Range car available at launch. Buyers will have a choice of six colors -- black is standard, but there are two silvers, a blue, a red and a white if you're willing to spend $1,000 more. You can then spend an extra $1,500 for 19-inch wheels and pay a further $5,000 for the Premium Upgrades package, which includes power-adjustable and heated seats, a better sound system, LED lighting and a tinted glass roof -- which you're probably going to want if you plan to drive anywhere the sun rises.

But you're not done yet. Tesla's Autopilot, which allows for advanced driver assistance on the highway and well-marked back roads, will set you back $5,000. If you want to roll the dice and add the extra sensors to enable future full autonomy when Tesla finishes developing it, that'll be another $3,000.

All told, if you tick all the boxes you come in at $59,500. That's about $10,000 cheaper than the most affordable Model S that is currently available, the the 249-mile Model S 75. I'd still call that a very good deal for what you get, though not quite the value proposition of that $35,000 starter edition.

The Model 3 will accelerate to 60 in 5.6 seconds by default and whirr its way up to a top speed of 130 mph. If you opt for the Long Range edition, however, and that drops to 5.1, the top speed rising modestly to 140 mph. Compare that to a top-shelf Model S P100D's 2.4-second 0 - 60 time and it may sound slow, but 5.1 seconds is more than respectable and, since this is an EV, the immediate throttle response means it feels much quicker.

Numbers like range and price are hugely important when it comes to the success of an EV, but they only tell half the story -- and I'm very happy to report the other half of the tale is just as good.

The car automatically unlocks based on your proximity, connecting to your phone using Bluetooth LE -- yes, there isn't a physical key -- and the door handles are manual, unlike the auto-extending ones on the Model S. Push on the back and they swing out, much like the handles on a Nissan GT-R.

The Premium seats I sampled are low-slung and comfortable, and power-adjustable using traditional controls down to the left of the seat. When it comes to adjusting the steering wheel and the mirrors, that's when tradition goes out the window. There are two thumbwheels embedded in the spokes of the steering wheel that can be rolled up or down or pushed from side-to-side, much like many computer mice.

It's with these that you configure many more things in the car. Dig into the settings section of the 15-inch central display and you can select mirror adjustment mode. Here, the left wheel controls the left mirror, the right one controls the right. The same goes for adjusting the position of the steering wheel itself.

This is not only a novel and, eventually, intuitive solution, it reduces the number of physical controls that have to be added to the car. This means an interior that is not only visually more pure, but is also easier to manufacture. It's also cheaper. Even the air vents, which run the full width of the dashboard, are adjusted by that central touchscreen, not unlike the new Porsche Panamera.

Interior impressions are nice, but of course I was itching to get going, and while I didn't have a huge amount of time with the car -- maybe 15 minutes total -- it was enough to get some solid impressions. And solid is a good way to describe the car. Despite being a fair bit smaller than the Model S, even more so than the X, it still feels roomy inside and drives with the same poise and composure as the bigger cars.

Acceleration is indeed less brisk than its bigger siblings, but that passenger-startling response that's a Tesla trademark is still here. I was able to zip through some increasingly dense traffic without issue, a quick flex of my right foot plenty enough to dive into any gap. On the move the Model 3 feels far more nimble than its 3,814 pounds would suggest (3,549 if you go for the shorter-range model), and with the battery pack down low it stays admirably flat in the turns.

The steering wheel is fat and deep and feels great in the hand, though I must admit the thumb wheels do feel a bit plasticy compared to the other materials, which are quite premium -- in the Premium trim, at least. Headliner, dash, seats and even the wood insets felt nice to the touch. It's definitely more than on par with cars available from the low $40,000 range.

And that single, central display? It does take some adjustment not having a traditional speedometer or the like behind the wheel, but I didn't mind it. In fact, I found myself a little less distracted as I wasn't constantly glancing down at my speed. Some drivers will surely struggle with it, though, and I still hope that Tesla offers a heads-up display at some point, but for me at least, it's not an issue.

Beyond the driving dynamics and price and everything else I was curious to know about, I was probably most concerned about two things: headroom in the rear seats and space in the trunk. I'm happy to report that both are non-issues.

I'm six feet tall, yet with my short legs I sit tall and often struggle to get comfortable in the rear seats of even full-size cars. I had no problem in the Model 3. Instead of a traditional roof liner, there's nothing but glass over your head in the back. While I do wonder what this'll mean on a hot, sunny day, it does make for some very lofty seating.

And then there's the trunk. Here I was concerned because the rear glass does not swivel upward, this is a sedan not a hatchback, and from looking at the earlier concepts it sure seemed like you'd be left with a narrow opening back there. But, the trunk, though shallow, opens up high and gets well out of the way. There's actually a very large trunk opening and a plenty-deep trunk.

Two bags of golf clubs should be no problem. I bet you could even manage four.

Tesla has repeatedly declined to give a formal update number of pre-orders in the system, but today Musk himself told us that the company has received "somewhere over a half-million reservations." 500,000 also happens to be the rate of annual production Musk hopes to be able to eventually achieve for the Model 3, which will be built at its Fremont factory along-side Models S and X.

But, it will take some time to get to that rate, and Musk says that if you were to place a deposit for the Model 3 today you should expect delivery at the end of 2018.

By the end of this year, Musk hopes to be building about 5,000 Model 3 sedans weekly. If you're a reservation-holder I'll let you do the math on when you can maybe, hopefully expect yours, but a lot of this assumes that the production ramp goes smoothly. "It's an amazing car," Musk said, "but we're going to go through at least six months now of manufacturing hell."

That hell will include finding problems in the assembly process, optimizing efficiency and, quite likely, dealing with one or more suppliers failing to deliver their widgets with promised frequency. The Model X "hell" was infamous as Tesla struggled to get the SUVs out the door in any volume, but all those learnings went into the design of the Model 3. Everything from the simplification of the interior to the number of connections on the coolant system was minimized, all with the intend of making the car simple, fast and cheap to build.

After the incessant delays of the Model S and Model X, cynicism around Tesla has evolved to something of a fever pitch. Tonight, with the delivery of the first Model 3 sedans, Tesla is also delivering on a promise and doing so with a car that's not only on time but really good. No, it isn't nicer or faster than the S or the X, but it isn't supposed to be.

Only time will tell on reliability of the car, and there will be some inevitable teething issues, but overall I'm impressed with what I've seen and felt. This is an EV that drives as good as it looks and is competitively priced. We've come to expect the first two things from Teslas of the past. It's good to finally add that third part to the equation.