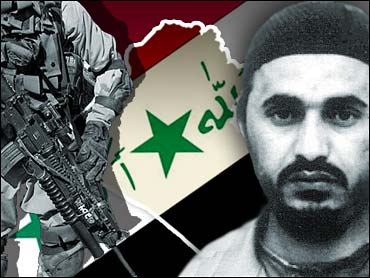 The U.S. military released on Tuesday a letter it believes was addressed to terror mastermind Abu Musab al-Zarqawi from an underling complaining that incompetence of leaders in his al Qaeda in Iraq network is hurting morale among his fighters.

The letter's authenticity could not be independently confirmed, but it was the latest in a series of claims by U.S.-led forces of progress in the fight against Iraq's bloody insurgency, including defeating militants in skirmishes, raiding their hidden arms caches and getting tips about them from Iraqi informants.

But the claims come at a time when insurgents have dramatically stepped up attacks, including large suicide bombings, killing nearly 170 people in six days.

Gen. Richard Myers, chairman of the U.S. Joint Chiefs of Staff, said on April 26 that Iraq's insurgency remains undiminished in its capabilities, despite U.S.-led efforts to crush the militants. "I think their capacity stays about the same. And where they are right now is where they were almost a year ago," he said at a Pentagon news conference.

Al-Zarqawi, a Jordanian-born militant who has declared his allegiance to Osama bin Laden's al Qaeda network, is the most wanted man in Iraq. He is tied to many bombings, kidnappings and beheadings of hostages since the U.S.-led invasion removed Saddam Hussein from power two years ago.

Pentagon spokesman Bryan Whitman said the letter is believed to be authentic and "gives the indication that his [al-Zarqawi's] influence and effectiveness are deteriorating."

"It describes low morale and weak and incompetent leadership," Whitman said, though he added that al-Zarqawi's organization can continue to carry out significant attacks.

The letter, dated April 27, was signed by Abu Asim al-Qusaymi al-Yemeni, who Whitman said was an al Qaeda member and veteran of fighting last year in the former insurgent stronghold of Fallujah. It was seized during an April 28 raid in Baghdad, which also yielded an undated document listing targeting information and sketch maps for kidnappings and bombings, the U.S. military said.

A copy of the letter distributed by the military, in the original handwriting in Arabic, is addressed to "Sheik Abu Ahmed" and is full of scratched out words and is illegible in parts.

Al-Zarqawi has never been known to use that name, said terror experts in the United States, Egypt and Jordan — al-Zarqawi's home country. In the numerous postings about him on Islamic militant Web forums, the name Abu Ahmed is never used, though he is sometimes referred to as "the sheik" or even "the butchering sheik."

It was unclear whether the writer made a mistake in the name or was addressing someone else. Whitman said Abu Ahmed is al-Zarqawi, and the letter seems to address the top figure in the organization.

The writer of the letter complains about some of the middle ranks of al Qaeda leaders in Iraq — the "emirs," Arabic for "princes" — and asks the sheik to "test those who are below you. Some of them are ... oppressors and some of them are not so."

"Morale is weakening and there is [exhaustion or confusion] among the ranks on the mujahedeen, and some of the brother emirs are discriminating among them. God does not accept such actions," the writer says, according to an AP translation of the copy provided by the military. "We have found emirs who are not fit for leadership."

He appears to give his side of a particular incident, saying his fighters got confused orders over whether to carry out suicide operations or go home and were abused by their superiors. "This came after humiliation and rude treatment and many other things. Who can tolerate all this?"

He appears to chide the sheik for not being as close as he once was with the fighters. "The situation is not the way it used to be in Fallujah, when you used to come and visit us and we used to enjoy sitting with you. The situation has completely changed," he writes.

Finally, the writer asks for a direct meeting to discuss "secret" issues. "I no longer trust any person who says that he is coming from the sheik's side. We are tired and we have suffered a lot," he says.

He also praises the sheik for being "a thorn in the mouth of the Americans."

Five suspected insurgents were killed and three captured during the April 28 raid, the military said. The statement identified one of those killed as Abu Rayyan, the Saudi leader of a Baghdad-based car-bombing cell.

U.S. forces have said they nearly captured al-Zarqawi in a February raid that recovered his computer.

The U.S. military has claimed similar finds of al-Zarqawi communications in the past.

In February last year, the military released a letter it claimed was written by al-Zarqawi complaining that if the insurgency failed to prevent the handover of sovereignty, "then there will be no choice but to pack our bags and move to another land where we can once again carry our banner."

However, al-Zarqawi's group has continued unrelenting bloody attacks after every stage of progress in Iraq's moves toward democracy — following the handover of sovereignty last year, elections in January and the creation of Iraq's government this week.