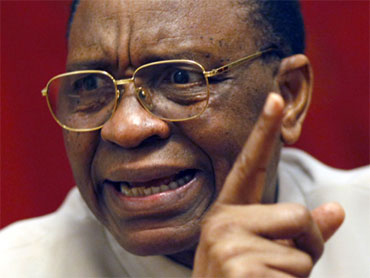 U.S. crude oil futures hovered just below $44 a barrel Monday, the highest since oil futures began trading in New York 21 years ago, amid fears of further disruptions in supply and new terror warnings in the United States.

September light sweet crude contracts were trading down 20 cents at $43.60 a barrel in electronic trading before the market opening on the New York Mercantile Exchange. Prices rose as high as $43.92 a barrel several times earlier in the session. The $43.80 a barrel settlement price on Friday was the highest close since oil began trading on the New York exchange in 1983.

In London, oil prices on the International Petroleum Exchange eased with some traders skeptical about terror warnings in the United States that sent oil futures soaring in New York. Contracts of Brent crude for September delivery were down 18 cents to $39.85 a barrel in early trading.

However, traders said prices in London were lower partially because of profit-taking and were poised to go higher if there was another strong opening in New York.

Barclays Capital in London said the market was ready to push higher.

Crude prices are nearly 35 percent higher than they were a year ago. Fears over oil supply from Iraq and Russia also contributed to high prices, traders said.

Iraq will take another four years before it can raise crude production to a targeted 4 million barrels a day, the nation's Oil Minister Thamer al-Ghadhban was quoted as saying by the state-run al-Sabah newspaper.

Iraq's oil production of 2.6 million barrels a day has been down by around 400,000 since the U.S.-led invasion last year, he said.

Distribution is often disrupted by attacks on pipelines and other infrastructure.

"Our aim is to increase production up to 6 million barrels a day, but that needs the investment of between $15 billion to $20 billion," the minister said.

Russian oil giant Yukos remains mired in a yearlong dispute with the authorities over multiple claims for unpaid taxes, and appears set to lose some production units that contribute to its 1.7 million barrels a day of output.

A Moscow court Friday rejected the company's appeal to lift an order banning the sale of its assets, including its largest operating unit Yuganskneftegaz.
By Jane Wardell