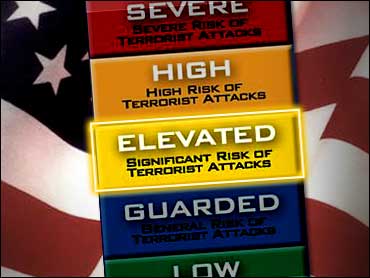 The U.S. government is warning that a surge in terrorist violence overseas and the end of the Muslim Ramadan holy month increases the possibility of attacks on American interests abroad.

A classified bulletin was sent Thursday to law enforcement and government officials. It says the spate of bombings in Istanbul and elsewhere signal al Qaeda's continued desire to attack U.S. interests abroad, according to a senior law enforcement official speaking on condition of anonymity.

CBS National Security Correspondent David Martin reports the CIA's threat matrix, the daily compilation of terrorist threats against Americans, was, in the words of one senior official, "off the charts" with indications of possible attacks throughout Europe, Aafrica and the Middle East.

Still, there are no plans so far for the government to raise the U.S. color-coded terror threat level beyond its current "yellow," or elevated, position, the midpoint on a five-level scale, officials said.

The month-long Ramadan holy period, which ends early next week, has seen a spate of deadly terrorist bombings in Turkey and Iraq.

The holy month began with several deadly bombings in Baghdad, including a suicide attacker who detonated an ambulance packed with plastic explosives outside the international Red Cross headquarters in the Iraqi capital.

On Thursday, at least 27 people were killed and about 450 wounded when twin truck bombs destroyed the Istanbul headquarters of a British bank and the British consulate. The attacks follow bombings at two Istanbul synagogues Saturday that killed 23 people.

The FBI warned in October that al Qaeda and other Islamic extremist groups might time attacks to coincide with Ramadan because of the religious symbolism. But many law enforcement and intelligence officials also say that terror groups tend to act when operations are ready, regardless of the date.