"All In The Family" was a huge hit for Norman Lear - KING LEAR, you could call him, considering the respect that he enjoys in the world of entertainment. Bill Whitaker has a Sunday Profile:

There's gotta be story behind the hat … and there is.

Norman Lear's wife bought him his signature hat to keep him from scratching his head while he writes.

But he's a man who has worn many hats over the years: TV, movie & music producer, political activist, family man. At 86, you'd assume he'd done it all. But ask Norman Lear and he'll tell you he's only just begun.

"No, there's no slowing down," Lear told Bill Whitaker.

"Why not? You've earned the right to say, 'You know, I want to sit back and watch all these things come to fruition.'"

The man best known for creating hit after TV hit in the 1970s is occupied these days with music. He bought into a record company 10 years ago, and today his greatest passion is Concord Record group's latest project: Playing for Change, little-known street musicians recorded separately around the world, brought together in song.

It's had 12 million hits on the Internet, a tour is planned … a CD. Profits help build schools for music in the third world.

Lear wants nothing less than to inspire - no, change the world through music.

"I've never shown that - [and] I've shown it to a lot of people - where they haven't been emotionally connected when it was over," he said.

Lear has been connecting with audiences for decades. He grew up with TV, writing for stars like Jerry Lewis, making us laugh at his characters while making us look at ourselves.

Lear first became a household name back in 1971 with his insurgent little sit-com, "All in the Family." The language was shocking; the topics - racism, rape, homosexuality, miscarriage - never seen on TV before, all spinning around the unapologetically politically incorrect, working class, blowhard, bigot next door, Archie Bunker, played by the late Caroll O'Connor.

It was the number one show for five straight years.

"What made you think that bigotry could be funny?" Whitaker asked.

"It wasn't bigotry per se," Lear said. "It was the state of the man's mind. He was afraid of tomorrow."

Lear took our anxiety at the social upheaval at the time - Vietnam, the women's movement, civil rights - and invited us to face it with a laugh, always pushing our buttons, and always pushing the envelope.

He was probably the hardest working man in show business, running from one taping to the next. He even did the warm-up acts.

It paid off. Some weeks four of the top-five shows were Lear's.

"Did you plan to topple old taboos when you put these shows on the air?" Whitaker asked.

"No. You know, you could hear anything we were saying in a schoolyard. What was the big surprise?"

"I think the big surprise was that you put it on TV, the first to do it."

"For him to say that he didn't have an impact on not only television, but society is, you know, it's a little too humble," said Rob Reiner.

But in 1980 the king turned his back on his TV empire to go in a completely different direction.

He grew alarmed as evangelical Christian preachers grew more visibly and vocally involved in politics, with views and tactics he found divisive. He responded the way he knew best - on television.

His TV advertisement ("There's gotta be something wrong when ministers try to tell you you're good Christians or bad Christians depending on your political point of view") spawned People for the American Way, his grassroots civics organization to keep Americans aware and protective of their rights.

"You are not saying that religious people should not be engaged in political life?" Whitaker asked.

"No, I'm saying anything but that," Lear said. 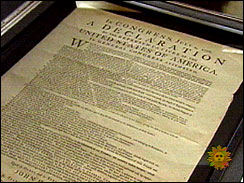 (CBS)
He says all voices should be heard. As proof, he turns to the original document: one of 25 remaining original printings of the Declaration of Independence, which he bought for $8.1 million.

"I never know whether I'm going to cry or just tear up," he said, showing the document, which he called "our nation's birth certificate."

"'All men are created equal, endowed by their creator with the right to life, liberty and the pursuit of happiness.' I mean, come on!"

And just as this original sheet was used in 1776, Lear takes it around the country for as many Americans as possible to see and read its message.

We were with him the night he brought it to students at the USC communications school, which, by the way, has a research center named for Lear.

Buying the Declaration spawned Declare Yourself, a Lear organization that has registered more than 4 million young voters - in states red and blue - since 2004.

And while his own politics are decidedly liberal, he preaches that democracy only truly works when everyone is involved. His latest endeavor: Born Again American, using song to get Americans off the sidelines and engaged in civic life.

"It's totally bipartisan," he said. "I think of myself, by the way, as a bleeding heart conservative. You will not mess with my Bill of Rights!"

He defends everyone's rights: those like him, who support President Obama ("Barack, you know? Who could have guessed five years ago we were going to have an African American as president?") and those who don't.

"What would Archie Bunker say [about a black president]? Boy, I've thought about that," Lear said. "You know, I think he'd find some way of saying, 'The guy isn't really black.' Ha ha ha! You know? 'He's half-black, that's a big difference. And you don't know if that ain't the biggest half.'"

"You know, I'm occupied with 'now' and 'next,'" he said - more voters to register, more movies, more music.

"I want to matter every day," Lear said. "That brings me great pleasure."