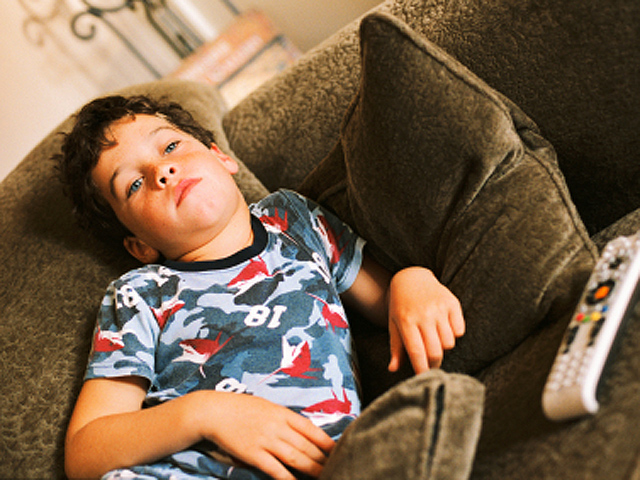 (CBS News) Parents who don't want their kids watching television because of what it might do their minds may also want to be concerned about their children's waistlines.

A new study of young children finds that with each hour of television watched, their waistlines grow larger and their muscular fitness gets weaker.

TV shortens life by 22 minutes per viewing hour, says study
Sitting less than 3 hours each day may tack 2 more years onto your life

The study looked at 1,314 kids between 2.5 to 4.5 years old, whose parents were asked to report how many hours of television they watched during the week and on weekends. On average, kids watched about nine hours of television each week, but TV-time appeared to increase by an average of 6 hours with age, indicating 4.5-year-olds watched about 14.8 hours of TV per week. According to the researchers, about 15 percent of the kids in the study were already watching 18 hours or more of TV per week when the study began.

Measuring waist size in 4.5-year-old kids, the researchers saw a child's waist grew by a little less than half a millimeter for ever additional hour a child watched TV per week on top of the average the parents reported originally. That means a 4.5-year-old child who watches 18 hours of television each week will gain an extra 8 millimeters, or 0.3 inches, on his or her waist by the time they turn 10.

What's more, each added hour of television made kids perform about .36 centimeters worse on a standing long jump test, which suggests trading physical activity for cartoons on the couch took a toll the child's leg strength. The research was published online in the July 16 issue of the International Journal of Behavioral Nutrition and Physical Activity.

Extra millimeters on the waist might not sound like a ton, but they may add up over time, raising risk for obesity and other chronic diseases such as diabetes or hypertension. Getting into a habit of television watching as a child may turn into a life-long habit for adults, the researchers said, which may affect their athletic ability along the way.

"Behavioral dispositions can become entrenched during childhood as it is a critical period for the development of habits and preferred activities," study author Dr. Caroline Fitzpatrick, a researcher at the University of Montreal, said in a press release. "Accordingly, the ability to perform well during childhood may promote participation in sporting activities in adulthood."

Research published last week that looked at adults found that cutting television viewing to less than two hours each day could tack on an extra 1.38-years in life expectancy.

The American Academy of Pediatrics recommends limiting children's total media time to no more than two hours of quality programming each day, and says there is no evidence that toddlers under 2 benefit from television.

"These findings support clinical suspicions that more screen time in general contributes to the rise in excess weight in our population, thus providing essential clues for effective approaches to its eradication," said study co-author Dr. Linda Pagani of the University of Montreal. "The bottom line is that watching too much television - beyond the recommended amounts - is not good," said Dr. Pagani.