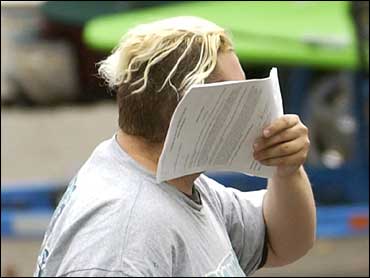 A high school senior charged with modifying a version of the Internet worm that crippled computer networks worldwide said the government has exaggerated its case against him, and disputed media coverage that portrayed him as a computer-savvy loner.

"I have a very supportive, close group of friends. I'm not reckless, I don't do drugs, smoke or drink. This is the first time I have ever had a run-in with the law. It's hurtful to see the accounts of me. I'm not depressed, embarrassed about my weight, or a misfit," Jeffrey Parson said in an interview.

Though his parents appeared on television Tuesday, Parson agreed only to an off-camera interview with a producer. He expressed concern the government was going to make an example of him.

"I understand that the government needs to catch someone for these crimes. I'm not the one they need to get," he said on a transcript posted on a news Web site.

Parson, 18, faces one count of intentionally causing damage to a protected computer. Conviction could bring a maximum 10 years in prison and a $250,000 fine.

Authorities say he admitted during an interview with FBI and Secret Service agents that he modified the original "Blaster" infection that made computers attack the Microsoft Web site last month. Prosecutors said Parson's worm affected at least 7,000 computers.

His parents, Bob and Rita Parson, spoke publicly for the first time Tuesday, and said their son was an ordinary teenager, not a computer whiz.

"My son is not brilliant; he's not genius," Rita Parson said. "Anyone that has any computer knowledge could have done what Jeff did."

The Parsons said they do not yet have a lawyer because they cannot afford one. They said a local attorney has been appointed for their son, but will not represent him when he goes to court Sept. 17 in Seattle.