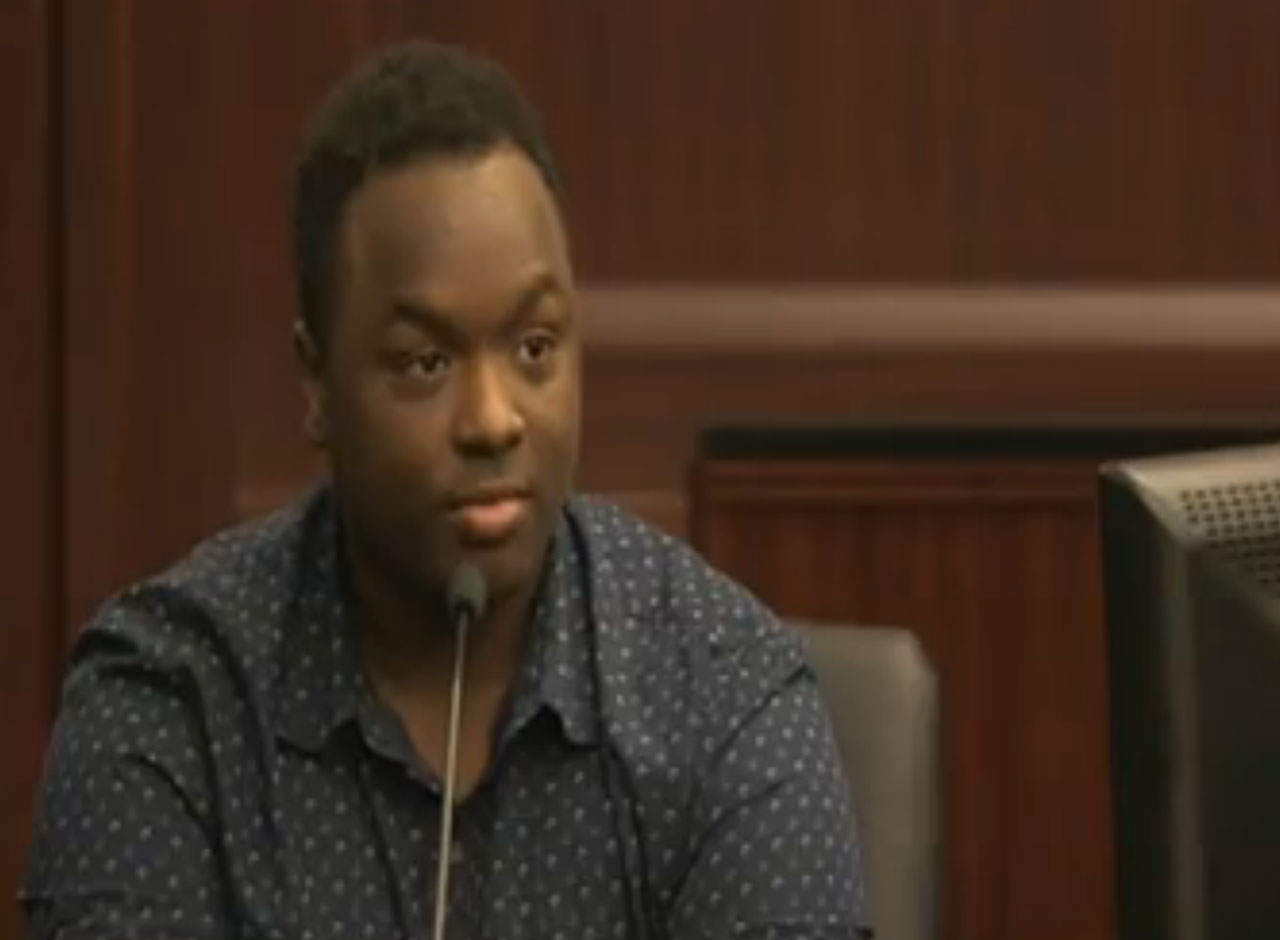 “Are you talking to me?”

Those are the words that Michael Dunn said before he began shooting at a car full of teenagers including Jordan Davis, according to two teens who were riding in the Dodge Durango in which the 17-year-old Davis was killed.

Tevin Thompson,18, was the first of three teens who were in the car with Davis to testify to what happened the night Dunn fatally shot him at a gas station in Jacksonville, Fla., on Nov. 23, 2012. Dunn is charged with one count of first degree murder, three counts of attempted first degree murder, and one count of shooting into an occupied vehicle. He has pleaded not guilty and maintains he shot at the car in self-defense.

Thompson testified that he, Davis, Tommie Stornes, 20, and Leland Brunson, 18, had planned to try to pick up girls at two local shopping areas and that they pulled into the Gate gas station around 7:30 p.m. for gum – “so our breath would smell good” – and cigarettes for the driver, Stornes.

According to Thompson, Stornes went into the gas station store and while the three other teens waited for their friend, Dunn pulled up in his car “really close” to their Durango. Dunn's car was so close, Thompson testified,  that he wouldn’t have been able to exit the passenger seat he was in. Both Thompson and Brunson testified that the music playing in the Durango was loud enough that the car shook with the bass. The teens also testified that the Durango had tinted windows.

Thompson told the court that Dunn said: “Turn your music down I can’t hear myself think.” Thompson says he obliged, but that Jordan Davis objected, saying, according to Thompson, “F**k that, n****r, turn it back up.” Thompson turned the music back up, and that’s when Davis and Dunn began “having a conversation back and forth.”

Both Thompson and Brunson said that it was Davis who escalated the verbal sparring. The teens told the court that they never heard Dunn curse or yell at Davis. Brunson said that at one point, Davis said, "I'm tired of people telling me what to do."

According to Thompson, Stornes came back from the convenience store, opened the driver's side door and did a little dance to the music before getting in. Brunson testified that Thompson turned the music down again when Stornes got back in the car, to tell him what was going on, and that that's when he heard Dunn say "Are you talking to me?" Brunson said he saw Dunn get a gun from his glove compartment, cock it, aim it out his window toward where Davis was sitting, and start shooting.

Both teens testified that Stornes put the car in reverse and that Dunn kept shooting as the teens sped away toward a nearby parking lot.

On cross-examination, defense attorney Strolla peppered the teens with questions about whether any of them had disposed of a weapon immediately after the shooting, but they remained firm that there was never any weapon in the car and that they didn't take anything out of the car after the shooting. Police found a pocket knife in Davis' pocket, and Brunson testified he didn't know it had been there and that the only thing he saw in Davis' hands during his verbal argument with Davis was a cell phone.

Strolla accused Stornes, who wrote and published a song about Davis, of trying to make money off his dead friend, and questioned why he referred to Davis as his "homeboy" on Facebook when he'd only known the other teen a month.

Stornes said he was only trying to memorialize Davis, who, he said, had a "big heart."

Strolla asked Stornes if he had been drinking or smoking marijuana on the night of the shooting; Stornes said he had not. Strolla also pressed Stornes about the fact that he had been on felony probation for burglary at the time of the shooting and was breaking his curfew by being out after 7 p.m., but did not, in Strolla's words, face "consequences" from that violation.

Strolla appeared to be making a case that police did not adequately question the teens or obtain written or recorded statements on the night of the shooting.