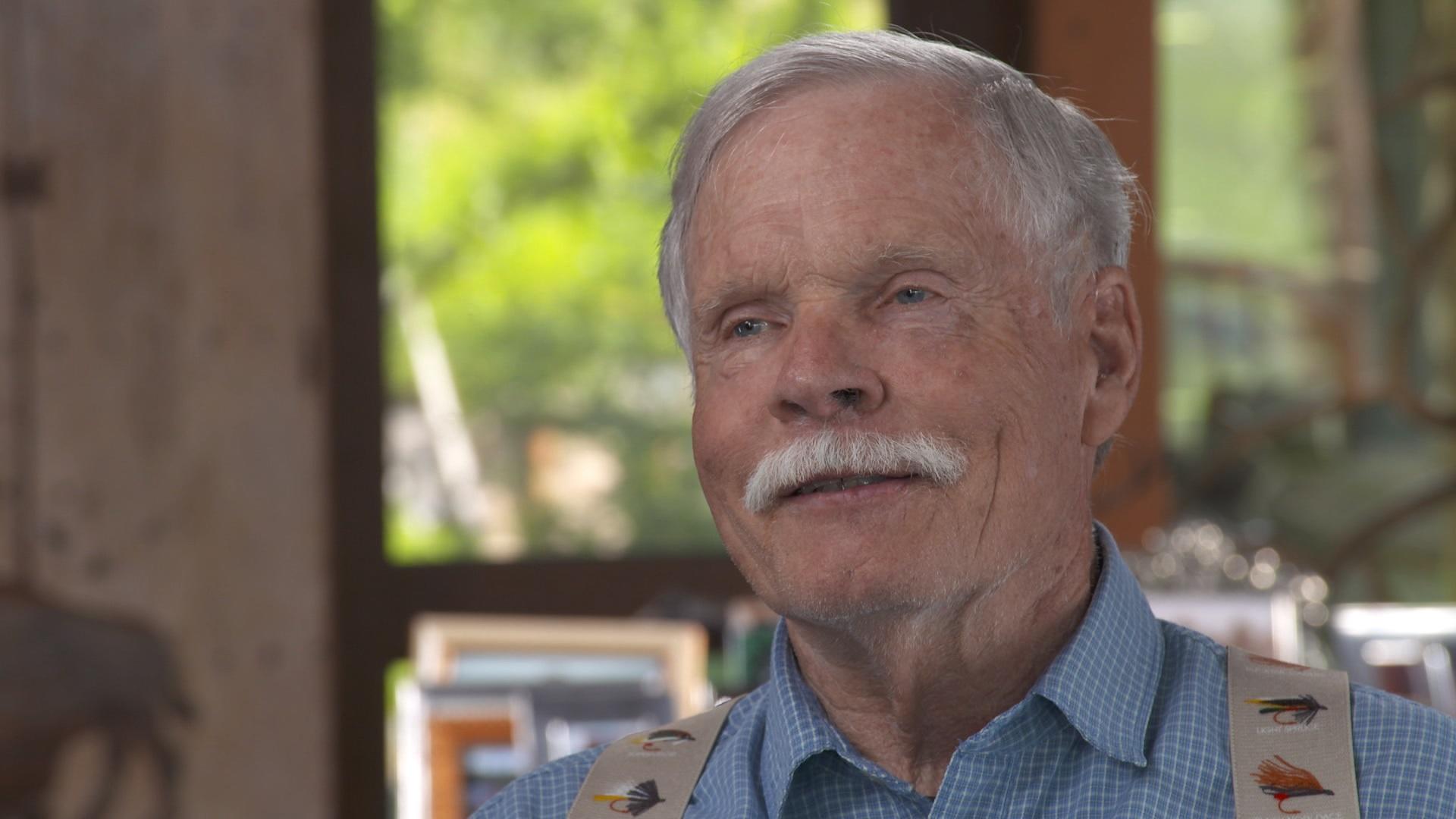 Any list of the legends of American business would have to include the name Ted Turner.  Bold and frequently controversial, Turner was very much a disrupter in his prime. But time and age have put him in a reflective mood, as Senior Contributor Ted Koppel found, when he visited Turner at his Montana ranch:

You need a wide lens on your camera to capture the many sides of Ted Turner, especially out on his sprawling, 113,000-acre ranch outside Bozeman, Montana.

Riding on horses together, Koppel asked Turner, "You ever ride your whole property here?"

"You've always been a bit of a dreamer, haven't you?"

"Well, a lot of my dreams have come true!"

"60 Minutes" has been covering the fulfillment of Turner's dreams for almost 40 years. In 1979, Harry Reasoner made the following observation about Turner: "He's just convinced he can do anything he's set out to do.  And so far, he's been right."

At that point, Ted Turner had not yet created CNN.  But he had bought the Atlanta Braves and the Atlanta Hawks, and by transmitting all those baseball and basketball games via satellite to cable stations around the country, Turner transformed his not-very-successful local Atlanta TV station  WTBS into his own creation, which he dubbed a "super station."

"Programming? You know we've got the best of any independent station," he said in a TBS ad.

Around the same time, Turner, a man of many parts, had already skippered the yacht Courageous to a 4-0 sweep of Australia in the America's Cup, arguably the world's most prestigious yachting race.

"I'm a lot of different people, if you didn't know that by now," Turner told Reasoner. "I'm a multi-faceted person.  I got a lot of multiple personalities.  You ought to see me at midnight on a full moon!"

By the time Diane Sawyer got to Turner, in 1986, CNN was well up and running, and Turner had his sights on acquiring CBS.

Sawyer asked him, "What happened to the man who said CBS was 'a cheap whorehouse taken over by sleaze-artists'?"

"I said that years ago," he said. "I was more of a crusader then than I am now, but I really felt that way at the time."

Ted Turner was a loud practitioner of political incorrectness years before Donald Trump rode that pony into the White House.

Back in '86, he gave a speech in which he said, "Italians!  Italians!  Imagine Italians at war.  What a joke!  They didn't even belong in the last war.  They were sorry they were in it! They were glad to get out of it! They'd rather be involved in crime and just making some wine and having a good time!"

They called him the "Mouth from the South" and "Captain Outrageous." But when Turner sat down with Mike Wallace in 2003, CNN was already an international powerhouse, and Turner had begun putting his money where his mouth had been.

"I got a letter saying that I was going to be honored by the United Nations Association as their Man of the Year.  And I thought, well, what am I going to say? 'Cause I had to make a little speech."

And since money talks …

Turner fulfilled his pledge of $1 billion to the United Nations. He also contributed somewhere north of $250 million toward limiting the spread of nuclear weapons out of the former Soviet Union.

As Morley Safer discovered in 2008, though, Turner sometimes got his numbers a little confused, as in this conversation about the disastrous merger between Time Warner/CNN and AOL:

The confusion, the episodes of outrageous behavior, the euphoric highs and dark lows were initially diagnosed as symptoms of manic depression.

Turner says that was a misdiagnosis.  But he openly acknowledges having a progressive brain disorder, called Lewy Body Dementia.

"It's a mild case of what people have as Alzheimer's.  It's similar to that, but not nearly as bad," Turner said. "Alzheimer's is fatal.  Thank goodness I don't have that. But I also have got … let's … I can't remember the name of it."

"That's dementia.  I can't remember what my disease is!" he laughed.

"It's an unpleasant thing to remember."

"Yeah.  So, just tell me what the symptoms are.  I mean, one of the symptoms we're seeing right now: You can't remember what you wanted to tell me.  But frankly, Ted, at our age, you know, not being able to remember things is pretty common."

"But it's more extreme with you?"

Ted Turner begins most mornings these days with some yoga.

He has never been a quitter. His willingness to be shown on network television in what is certainly a diminished state is a testament to courage – and a surprising absence of vanity.

Turner has been, and remains to this day, a passionate environmentalist. Though he noted to Koppel, "I'm not buying anymore land. I've got enough."

Over the years, Turner has acquired roughly 2,000,000 acres of land, most, but not all of it, in the United States, much of it devoted to restoring the American bison.

Once there were literally tens of millions of bison in the American West.  By the early 1900s, they'd been slaughtered almost to the point of extinction – only a few hundred left.

"So, you've saved the bison race?"

Turner has more than 50,000 bison grazing on his various ranches. Early one evening he and Koppel drove to a remote section of the ranch in the hope of seeing, or at least hearing, some wolves.

Turner explained, "It's hit or miss."

"Right now, we're a couple of old geezers lookin' into the sun – we can't see a damn thing!"

We were just killing time, chewing the fat.

Koppel wondered if Turner had ever considered politics: "Were you ever tempted to get into the ring?"

"Not really.  A little bit," he replied. "The closest I came to running for office was when I was married to Jane Fonda. And when I discussed it with her, she was married to one politician [Tom Hayden], and she said, you know 'If you run for office, you run alone.'"

Koppel asked, "Were you thinking about going for the brass ring, for the big job?"

"I didn't think very much about it.  But I didn't see any point in doing anything else but that."

"So, you were thinking about the White House?"

Drive and ambition were qualities his father instilled in Ted Turner.

Koppel asked, "I think your father may have had the greatest impact on your life, would you agree with that, of any individual?"

"Of any individual?  Probably."

"And he took his own life at a young age."

"Yeah.  Well, that's young.  You told me yesterday that he'd left you a note.  Do you mind telling me what was in the note?"

"Well, he just said he was sorry.  That he got in … he felt like he was in over his head, but he wasn't. He just apologized.  Sad.  I loved him very much, and he was a hero of mine."

"As you get older now, as you go into the last few chapters of your life, do you ever think about suicide?"

Even as he struggles with the symptoms of Lewy Body Dementia, Ted Turner continues to engage great challenges:  threats to the environment, nuclear war, echoes, perhaps, of a poem he memorized as a classics major at Brown University recalling an ancient hero confronting insurmountable odds:

"Horatius at the Bridge" (1904) by Thomas Babington, Lord Macaulay:

"Then stepped forward Horatius, the Captain of the gate.
He said, 'To every man of woman born death cometh soon or late.
And how can man die better than facing fearful odds
For the ashes of his fathers and the temples of his gods? …

Hew down the bridge, Sir Consul, with all the speed ye may.
I would, with but two beside me, will hold the foe in play.
On yon narrow span 1,000 might well be stopped by three.
Now, who will stand on either hand and guard the bridge with me?"

"That was 'Horatius at the Bridge,'" he said.

And that, on the eve of his 80th birthday, is Ted Turner.