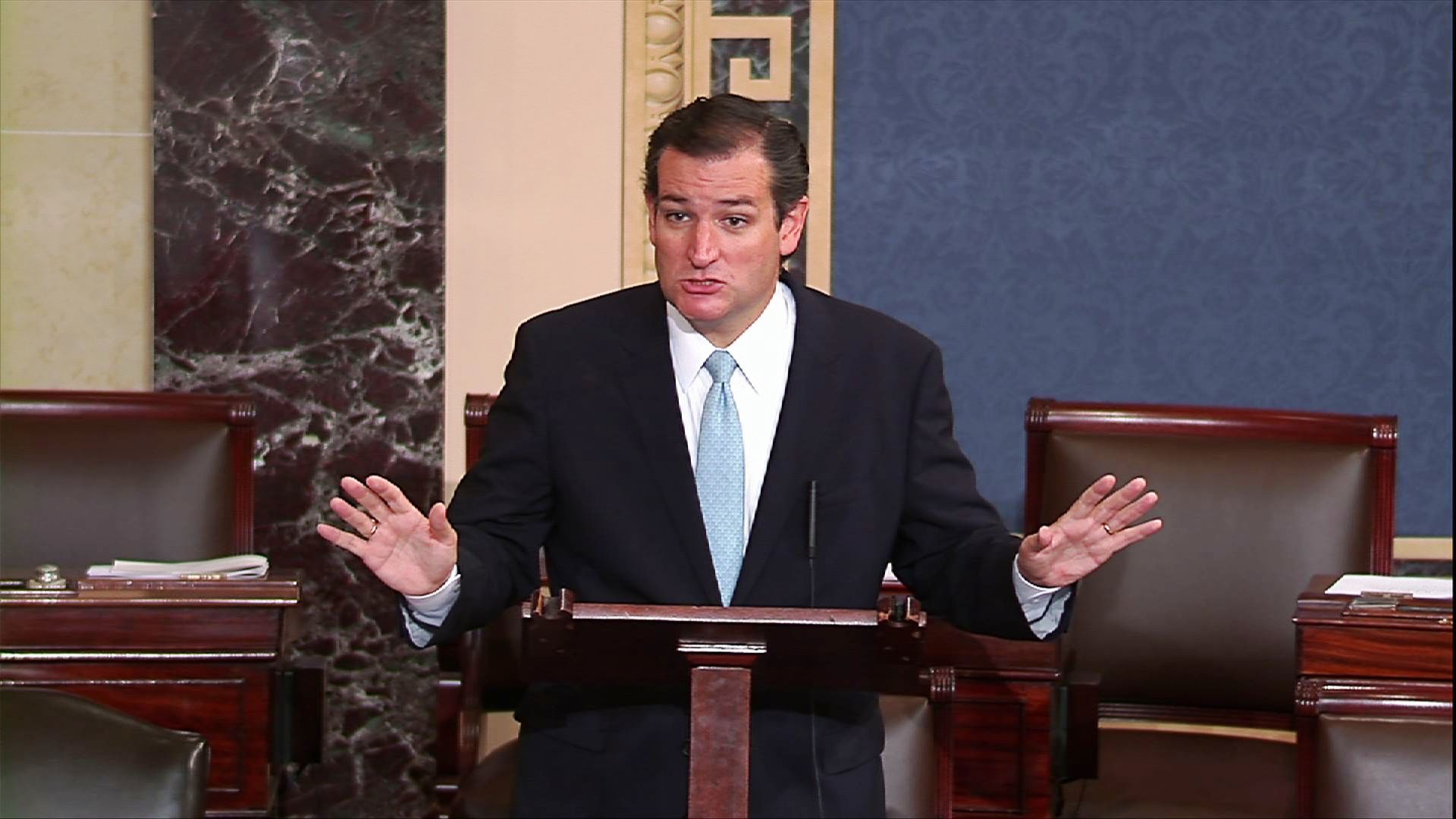 Congress continued its steady march toward a possible government shutdown Tuesday with another round of posturing, but little action to keep the government running past next Monday.

Both the Democratic and Republican leaders in the Senate seemed poised to speed up a vote on a spending bill from House Republicans that would have funded the government through Dec. 15 but stripped out funding for the Affordable Care Act. Many Senate Republicans were prepared to vote for the measure, which they favored, and Democrats were ready to get their hands on the bill so they could amend it and restore funding for the law.

But that possibility ground to a halt as Sen. Ted Cruz, R-Texas, took to the Senate floor to deliver an hours-long speech (that technically is not a filibuster, because of the Senate's procedural rules). He began talking at 2:41 p.m. ET, announcing that he intended "to speak against Obamacare until I am no longer able to stand."

His marathon entered its 15th hour at 4:41 a.m. ET on Wednesday. He did, however, get periodic breaks when other senators took the floor -- at least 8 Republicans and 2 Democrats at last count.

During his speech, several of Cruz's fellow GOP Senate colleagues joined him on the floor, including Sens. Rand Paul and Marco Rubio, The Associated Press reported.

Though he can't prevent the Senate from voting to end debate on the House proposal tomorrow, Cruz can speak throughout the night to draw attention to the issue and stop the vote from happening early. Although Cruz fully supports defunding the healthcare law, he has expressed concern that allowing the Senate to consider the measure will only allow Democrats to amend it and put the funding back in.

"Anyone who votes to cut off debate is voting to allow Senate Majority Leader Harry Reid [D-Nev.] to fully fund Obamacare," Cruz said on the floor of the Senate. His strategydoes not appear to have gained traction with most of his fellow Republicans.

"I think we'd all be hard-pressed to explain why we were opposed to a bill we were in favor of," said Senate Majority Leader Mitch McConnell, R-Ky., after Senate Republicans gathered for their weekly lunch meeting.

House members are set to return to Washington Wednesday, but there won't be much they can do about funding the government until the Senate sends back a revised version of their bill. That may not happen until Sunday, because of procedural hurdles - which would force the House to act quickly to avert a government shutdown on Oct. 1.

"We'll deal with whatever the Senate passes when they pass it," said Michael Steel, a spokesman for House Speaker John Boehner, R-Ohio. "There's no point in speculating before that."

Reid and McConnell both spoke favorably about the possibility of waiving certain rules to speed up debate. But, while McConnell told reporters that he didn't object to speeding up the votes, "any one senator can object to any effort to shorten the process." That is what Cruz is doing with his speech.