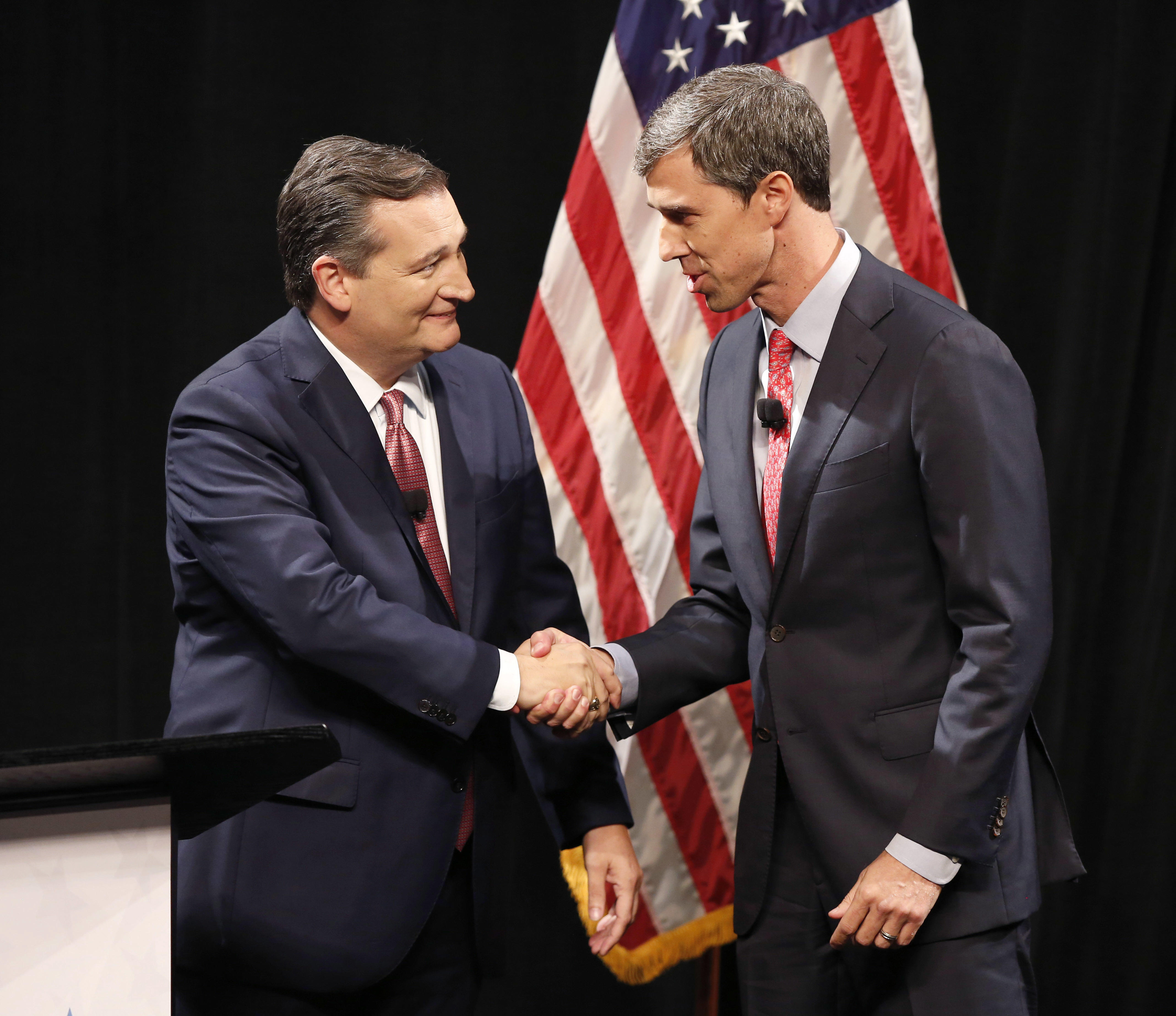 Texas incumbent Sen. Ted Cruz faced off Friday with his Democratic opponent, Rep. Beto O'Rourke, in their first debate on what is turning out to be a closer-than-expected race. The two had heated exchanges over the Second Amendment, the shooting death of Botham Jean by a cop in his own apartment, immigration, O'Rourke's 1998 drunk driving arrest and Supreme Court nominee Brett Kavanaugh.

The race between Cruz and O'Rourke has garnered national attention due to O'Rourke's unlikely popularity as a candidate. Re-election should have been easy for Cruz, but instead he is fending off a challenge from a social media-savvy Democrat who draws significant crowds. The debate presented an opportunity for both Cruz and O'Rourke to show off their considerable debating skills, while landing a few hits against their opponent.

Immigration and criminal justice were critical issues during the debate. When Cruz accused O'Rourke of wanting to repeal the Second Amendment, O'Rourke answered that was "simply not true," CBS Austin affiliate KEYE reports.

According to KEYE, the candidates sniped while the moderators pleaded for them to stop and for the audience to stop cheering. O'Rourke said Texas was ready for a senator who will protect the Second Amendment while imposing small restrictions to save lives and prevent mass shootings. He suggested those were supported by "gunowners and non-gunowners alike," and said the common GOP refrain after gun violence of offering "thoughts and prayers" wasn't enough.

"I'm sorry you don't like thoughts and prayers," Cruz answered. "I will pray for anyone in harm's way."

Cruz criticized O'Rourke for supporting citizenship for Dreamers, migrants who were brought to the United States illegally, so that these immigrants could fulfill their "full potential."

"This is your trick in the trade: to confuse, and to incite fear," O'Rourke said to Cruz. He accused the senator repeatedly of misrepresenting his words.

The two also sparred over hot-button topics such as Brett Kavanaugh's nomination to the Supreme Court, which Cruz supports and O'Rourke opposes, and gun control, which Cruz opposes and O'Rourke supports in the case of certain weapons.

Cruz also laughed when he was asked about his evolving relationship with President Trump, who called Cruz "Lyin' Ted" during the 2016 election.

"After the election in 2016, I faced a choice," Cruz said. "I made a conscious choice to do the job I was elected to do, which was to represent 28 million Texans." Cruz even touted his now-close relationship with the president, saying that it helped him advocate for Texans with regards to trade policy.

O'Rourke responded to a question about his own controversy -- a 1998 DWI arrest. He said that he was blessed with a second chance, and used the opportunity to pivot to discussing criminal justice.

"I've made the most that I could of my second chance," O'Rourke said. "And I white man in this country there's a privilege I enjoy that many African American men and women do not." He also framed his support for legalization of recreational marijuana as a criminal justice issue, as black men are disproportionately arrested for marijuana-related crimes.

Both candidates engaged in personal attacks against each other, including accusing the other of telling falsehoods. O'Rourke also hit Cruz for missing half of his votes in the Senate in 2016, comparing it to his traveling to all 254 counties in the state. However, the final question was on what kind thing they would say to each other. They each complimented each other on their public service, and for working so hard as fathers of young children.

"I know how hard he works," O'Rourke said. "I have no question that Senator Cruz wants to do the best for America."

"Being a dad of young kids is hard," Cruz agreed. He then compared O'Rourke to Sen. Bernie Sanders in a backhanded compliment, saying that like Sanders, he was truly committed to what Cruz sees as incorrect beliefs. "I think Congressman O'Rourke is passionate, he believes in what he's fighting for," Cruz said.

Cruz has criticized O'Rourke as a liberal out of touch with Texan values. The Texas GOP has also posted photos of O'Rourke's college punk rock band and his mug shot for his DWI on Twitter.

Mr. Trump will visit Texas in October to stump for Cruz. O'Rourke and Cruz will meet for two more debates before Election Day.