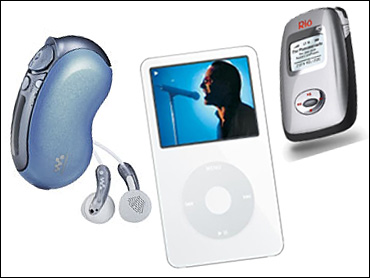 2005, as it turns out, was a pretty good year for technology. There were few, if any, unpredictable breakthroughs but there was at least one big winner. Apple Computer continued to hit it big with its iPod music player and its iTunes music download service.

Apple started the year by announcing the tiny iPod shuffle in January and ended the year with two new iPods: the nano, that replaced the iPod mini, and the newest iPod that features a 2.5 inch color screen and the ability to display video.

Many companies, including Samsung, Sony, iRiver and Creative came up with their own excellent digital media players but none, so far, were able to grab significant market share from Apple.

Technology Consultant Larry Magid looks back at 2005 and ahead at 2006 with veteran Silicon Valley analyst Tim Bajarin
In addition to selling lots of music players, Apple also led the way with the legal downloading of digital music. Its iTunes music service is estimated to account for more than 80 percent of legal music downloads despite competition from Real Networks, Napster, Yahoo and, of course, Microsoft. Still, some competitors came up with offerings that could make some Apple owners a bit green with envy.

In February, Napster announced that it will "rent" music for a monthly fee (starting at about $10 a month) with the ability to play them on compatible MP3 players. Yahoo Music launched a similar service as did Real Network's Rhapsody. I've been enjoying my test of Rhapsody's service that allows both PC and Mac users to listen to unlimited music via the Web or download to PCs and portable players.

My son, who has an iPod, is jealous of my Dell DJ music player because it lets me listen to Rhapsody songs as long as I continue to be a subscriber. Rhapsody, like Napster, charges $10 a month for its PC service and $14.95 for the ability to play the music on compatible digital portable players. Yahoo has a less expensive yet nearly identical service for only $5 for PC users and $11.99 a month if you want to listen on the go.

2005 was definitely the year of the podcast. Apple enabled iPod users to listen to podcasts on the go this summer but even before that, thousands of citizen broadcasters around the world started uploading their own audio programs for people to download and hear on their computers and portable devices.

By mid-year the big media companies caught on and just about all major broadcasters, including CBS News, now offer podcasting. Yours truly is no exception. Thanks to podcasting, instead of just 15 to 20 second sound bytes on network radio, I also get to create programs that go on for several minutes. But, you don't have to work for a big media company to be a podcaster. Tens of thousands of people now have a voice on the Internet's virtual airwaves thanks to podcasting.

Speaking of Apple, 2005 was the year the company finally –- sort of -– came out with a $499 computer. The Mac Mini starts at under $500, but you need to bring your own monitor, mouse and keyboard, which of course, adds to the price.

2005 wasn't the first year that people could watch TV on their cell phones –- Sprint introduced a service in 2004. But it's finally beginning to catch on. Sprint, Verizon and Cingular all offer optional video services that begin to make sense if you're using one of the high-speed broadband cellular networks that can deliver smooth, albeit tiny, video programs to cell phone screens. Don't expect this medium to be used for full length movies, but it's certainly a reasonable solution for catching up on some shows you may have missed or watching music videos or news clips.

This is also the year that cell phones began to morph with digital music players. Motorola and Apple announced their long planned Rokr iPod cell phone, but that was only a hint of what is to come. In October, Sprint rolled the first U.S. over-the-air instant download service that allows you to download thousands of songs using select Sprint Power Vision phones.

I've tested the service on a borrowed Samsung phone connected to Sprint's new high speed network. It works great and was very handy at a party I hosted when someone asked if I had any Polka music (I didn't). A couple of minutes later, I had just the tune for the occasion but at $2.50 per song, it's a lot more expensive than the 99 cents or less people are used to paying for PC downloads.

Speaking of wireless, WiFi wireless networks have been around for years, but they have become common place in 2005. This was the year that a number of municipalities, including Philadelphia and San Francisco, announced plans to roll out free, city-wide WiFi service. The first major city to actually launch such a service is hurricane-ravaged New Orleans, thanks to contributions from Intel, Tropos and other companies who are installing the equipment at no charge. Big Easy Web surfers can already access the free network from certain parts of the city, including the fabled French Quarter.

As great as WiFi may be, it's not the only way to get wireless Internet. Verizon launched its high-speed EDVO (Evolution Data Optimized) wireless cellular service in 2004 and in 2005 was joined by Sprint which launched its own high speed wireless data network. I've been testing Sprint's $59 per month unlimited data service ($79 if you don't have a Sprint wireless account) on my laptop and have been enjoying near DSL speeds (typically about 800 kilobits per second) wherever (on their network) I roam.

Sprint also offers a $39 per month plan that includes 40 megabytes of data with extra charges for additional use.

Flat panel high-definition TVs have been around for a few years but 2005 saw significant price declines on large plasma screens and brisk holiday sales for these TVs. Next year we should see some price breaks on LCD (liquid crystal display) screens as well.

Other significant milestones of 2005 include: Bill Gates' being knighted by Queen Elizabeth, Microsoft's announced plans to launch a new operating system (Vista) in 2006, Google's launch of its instant messaging and voice service as well as its Google Earth mapping service, the introduction of new gaming consoles by Sony, Nintendo and Microsoft (and the release of Microsoft's Xbox), eBay's acquisition of the Skype Internet phone service and the introduction of a $100 laptop for use in developing countries.

But if you think 2005 was a big year, you need only wait until the first week January to see what 2006 will bring. My colleague Dan Dubno and I will be at the Consumer Electronics Show, bringing you up-to-the-minute reports on the gadgets that consumers will be playing with by this time next year.